The Ragamuffin is a long-haired domestic cat similar in appearance to the Ragdoll. Ragamuffins are fairly large cats, queens weigh between 4.54 and 6.80 kg (10 to 15 lb) and toms weigh between 6.80 and 9.07 kg (15 to 20 lb). Each cat has a fatty pad on its lower abdomen and all are heavily boned.

The Ragamuffin is a very expensive specialty breed of domesticated cat which first made its appearance in 1994. They are adoptable as early as four months of age, but do not reach full maturity until around four years of age. They have fur like rabbits, personalities usually associated with dogs and bodies which are larger than typical domestic cats. 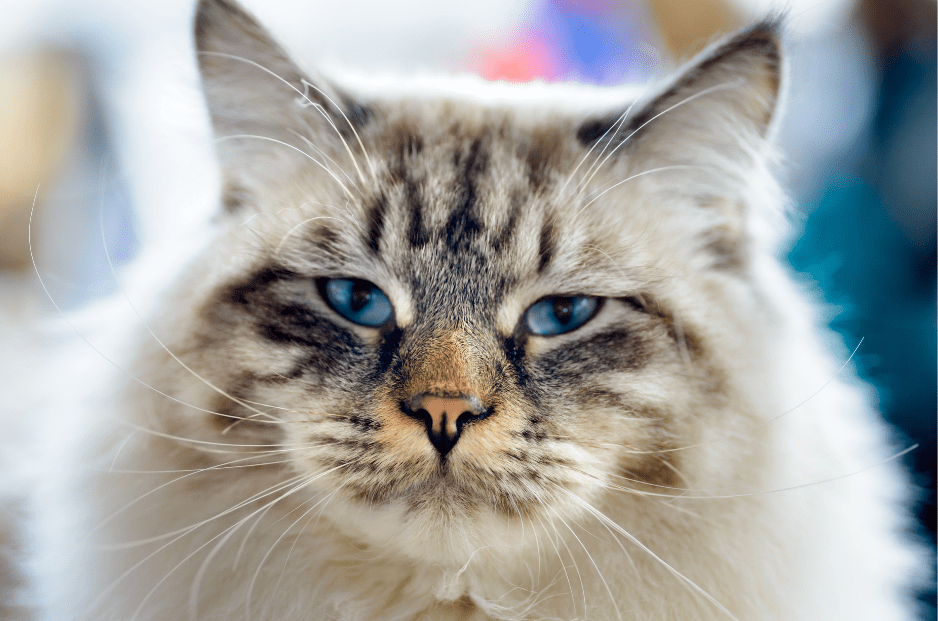 The Ragamuffin is a long-haired domestic cat similar in appearance to the Ragdoll. Ragamuffins are fairly large cats, queens weigh between 4.54 and 6.80 kg (10 to 15 lb) and toms weigh between 6.80 and 9.07 kg (15 to 20 lb). Each cat has a fatty pad on its lower abdomen and all are heavily boned.

Ragamuffins have plush, non-matting, soft fur which comes in many color varieties. The cats have very large expressive eyes.

They take longer to mature than most other cats, approximately 4 years to reach adulthood. Ragamuffins typically have long life spans in comparison to other domestic cats. They are a healthy robust feline with no recognized illnesses.

Ragamuffins are large, muscular, heavy cats that do not reach full maturity until approximately four years old. The look of the body is rectangular, with broad chest and powerful shoulders supporting a short neck. The head is a broad modified wedge with a rounded forehead and obvious nose dip.

There is a puffiness to the whisker pad and cheeks are full. Large, walnut shaped eyes give a sweet appearance. The Ragamuffin has a long, dense and silky coat, like that of a heavily furred rabbit, and the hair grows longer around the face and neck (a ruff), increases in length toward the stomach, with a wispy frill on the hind legs. Every possible color and pattern is allowable.

Difference from a Ragdoll

The Ragamuffin has a shorter, scooped nose, while the Ragdoll has a gentle curve with the final segment straight. Rather than having a flat plane between the ears, the skull of the Ragamuffin is gently rounded.

The Ragamuffin has a bit more chubby-looking face, and slightly tipped forward ears. Ragamuffin breeders also emphasize a sweet expression and walnut shaped eyes rather than the oval eyes seen in the Ragdolls. The Ragamuffin is allowed to outcross with certain other breeds every fifth generation which is important for maintaining the excellent health of the breed.

The Ragamuffin is one of the newest breeds of domestic cat. It was created in 1994. The exact development of this breed is cloudy and will likely remain a mystery. It was accepted in the Cat Fanciers’ Association (CFA) miscellaneous class in 2003.

In the 1960s a regular non-pedigreed white alley cat named Josephine, who had produced several litters of normal alley cats, was injured in an accident involving a car and taken to a laboratory at the University of California. 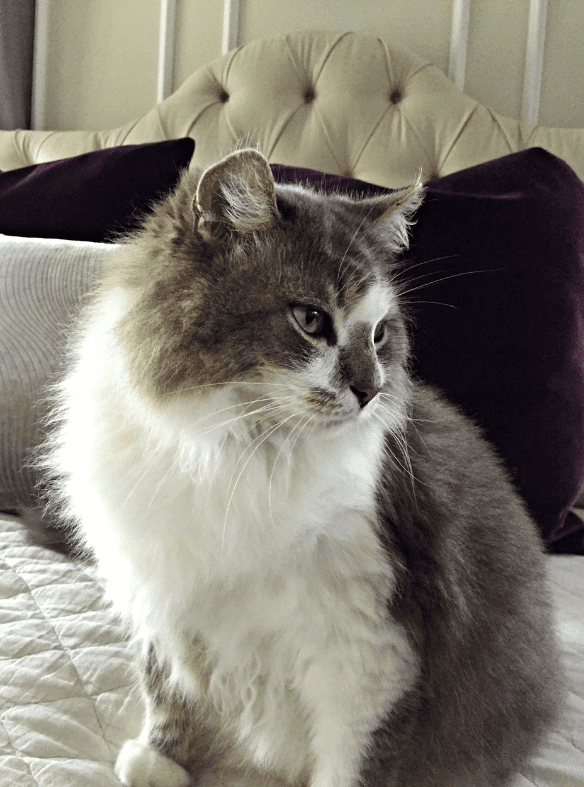 After she recovered, her next litter produced exceptionally friendly kittens. When the subsequent litter produced more of the same, Mrs. Ann Baker (an established cat breeder) purchased several kittens from the owner, who lived behind her, and believing she had something special, set out to create what is now known as the Ragdoll.

Baker, in an unusual move, spurned traditional cat breeding associations. She trademarked the name “Ragdoll”, set up her own registry – International Ragdoll Cat Association (IRCA) – and enforced stringent standards on anyone who wanted to breed or sell cats under that name.

The Ragdolls were also not allowed to be registered in other breed associations. In 1975, a group broke rank with IRCA with the aim of gaining mainstream recognition for the Ragdoll. This group eventually developed the Ragdoll standard currently accepted by major cat registries.

In 1994, a second group decided to leave the IRCA and form their own group due to increasingly strict breeding restrictions. The foundational breeders of the new group were Janet K.(current breed chair and president of the breed until 2008 ) Kim C.(current breed vice president) Judy M. and Curt G..

Their first act was to simply rename their stock of Ragdolls as Ragamuffins, Which was initially more of a joke put forth by Curt G. but when the original registry could not be undone, the name stuck. One of the first concerns of the group was the genetic health of their stock, which was alreay in its fifth generation of inbreeding.

So in the spirit of bettering the breed’s genetic health and personality, they out crossed to Persians, Himalayans, and domestic Long haired cats which increased the distinctiveness of the Ragamuffin from their Ragdoll ancestors.

They did allow some Ragdoll inbreeding as well (which will end in 2010 for ACFA recognized ragamuffins). The goal of the breeding has always been to keep their distinctively affectionate personality and health rather than any particular look other than their distinctive scooped nose and other minor traits that set them apart. 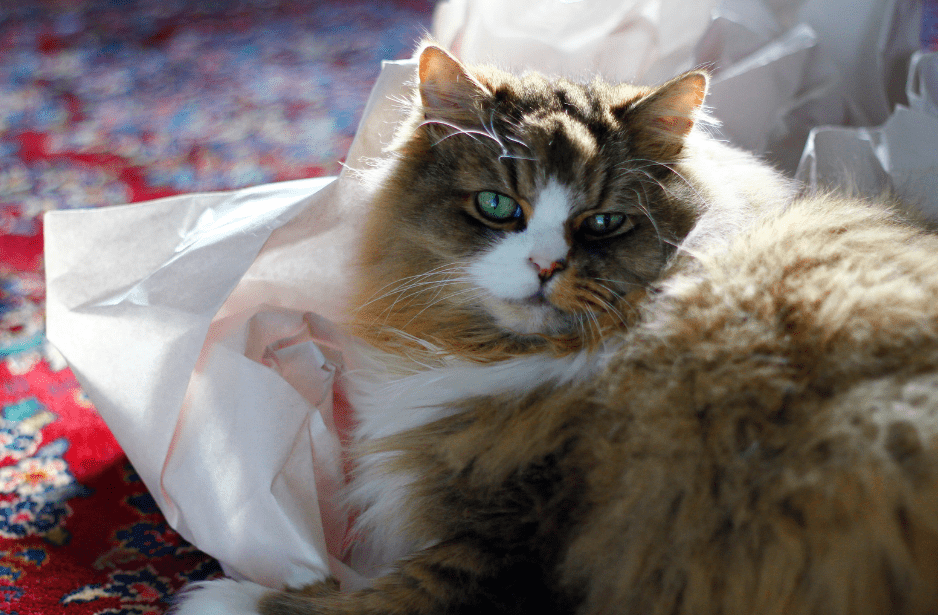 Many believe the Ragamuffin resulted from accidental breeding. Some accounts suggested Mrs. Baker started the breed in the 1960s with a Ragdoll cat named Josephine and a regular, non-pedigree cat.

The kittens turned out so cute and so special; Mrs. Baker wanted to preserve their special qualities by breeding Josephine’s offspring and by being the only person to breed and sell Ragamuffins.

Mrs. Baker’s restrictions created friction between herself and the other breeders, who ultimately, branched off on their own and pushed for the new registry with the CFA.

This breed has several of the color formations that are present on Ragdolls, but also has a variety of different colors. Some colors include: all variations of pointed color, including Tortie Point, Red Point, and Lynx Point. Ragamuffins also can be solid, tabby, tortie, splotched, or spotted.

Their eyes can be any solid color, including odd-eyed (ie, each eye has a different color). Points have blue eyes. Points are not allowed in Cat Fanciers Association shows.

This breed has several of the color formations that are present on Ragdolls, but also has a variety of different colors. Some colors include: all variations of pointed color, including Tortie Point, Red Point, and Lynx Point. It is said that Particolor and Mitted Ragamuffins are virtually identical to Ragdolls.

The Ragamuffin is described as a docile and affectionate cat. They are highly intelligent and love to play. Because of their gentle nature, Ragamuffins are generally kept indoors for their own protection.

The only extreme allowed in this breed is the very docile nature. The Ragamuffin loves people and is very cuddly and affectionate, with a tendency to go limp when held.

While not terribly athletic, they love playing and climbing scratching posts and some will even fetch toys. They greet family members at the door and will follow their people around the house. Because of their gentle nature, Ragamuffins are generally kept indoors for their own protection.