The Savannah cat is one of the newest breeds of cats currently being developed by a select few breeders around the world. There are very few Savannahs currently in existence, and the demand for them is quite high. The Savannah is the result of crossing an African Serval cat to a domestic cat. There is a variety of domestic cats (most often termed domestic shorthairs) used in breeding programs to create the early generation Savannahs, including Oriental Shorthairs, Egyptian Maus, Serengetis, Bengals, etc. 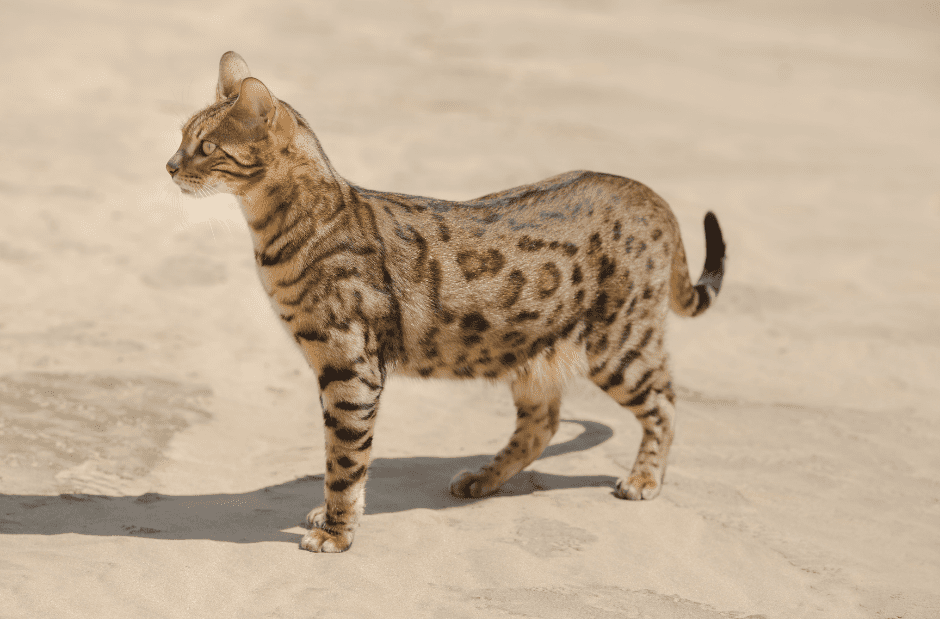 The Savannah breed, still in the early stages of development, provides a smaller (approximately 20 pounds, vs. the 40 pound Serval), more manageable (Savannahs use litter boxes and do not require any special diets, facilities or veterinary care) version of the beautiful, exotic Serval Cat for people to live with and enjoy in our own homes. Savannahs make wonderful family pets.

The kittens resulting from the first and subsequent generations from the breeding of a Serval cat to a domestic cat or a Serval cat to a Savannah cat are recognized as DOMESTIC Savannah cats. The goal of the Savannah breeding program is to create a uniquely beautiful domestic cat which has physical features distinctive to the Serval cat, and with the loving, dependable temperament of the typical domestic cat. Savannahs are known to be extremely friendly and talkative, and very playful and curious in nature. They are the largest hybrid cat available at this time.

This breed was named for the native African grasslands where the Serval makes its home, and also for the first and only Savannah kitten produced by Ms. Frank, who named the female kitten resulting from this Serval/domestic shorthair cross “Savannah”. Savannahs are breathtakingly gorgeous, with beautiful spotted and striped coats and colors ranging from silver to amber. They have distinctive “teardrop” markings around their eyes and large round ears. The Savannah is a very graceful, uniquely built cat, with a lovely long neck, long legs and ears, and a three-quarter length tail.

The breed standard states that they may be solid, tabby or silver/shaded in pattern, with the allowable colors in those patterns to be black, brown spotted tabby, silver spotted tabby or black smoke. The breed standard calls for a head shape that is longer than it is wide. When the face is viewed from the front it should form a distinct triangle. The head of the Savannah is slightly smaller than in proportion to the body. In profile, the nose is long but with a small chin and should add to the cat’s wild appearance. The ears of the Savannah are to be large and alert, with a wide base and slightly rounded tips.

As Savannahs are produced by crossbreeding servals and domestic cats, each generation of Savannahs is marked with a filial number. For example, the cats produced directly from a Serval/domestic cat cross are the F1 generation, and they are typically 50% serval (although if you use a F1 Savannah as the domestic cat, the percentage of serval blood can jump to 75%). The F2 generation, which has a serval grandparent and is the offspring of the F1 generation, is 25% serval. The F3 generation has a serval great grandparent, and is 12.5% serval. They can be very expensive to purchase because of their scarcity.

Male Savannah cats are typically sterile until the F5 generation or so, although the females are fertile from the F1 generation and on. 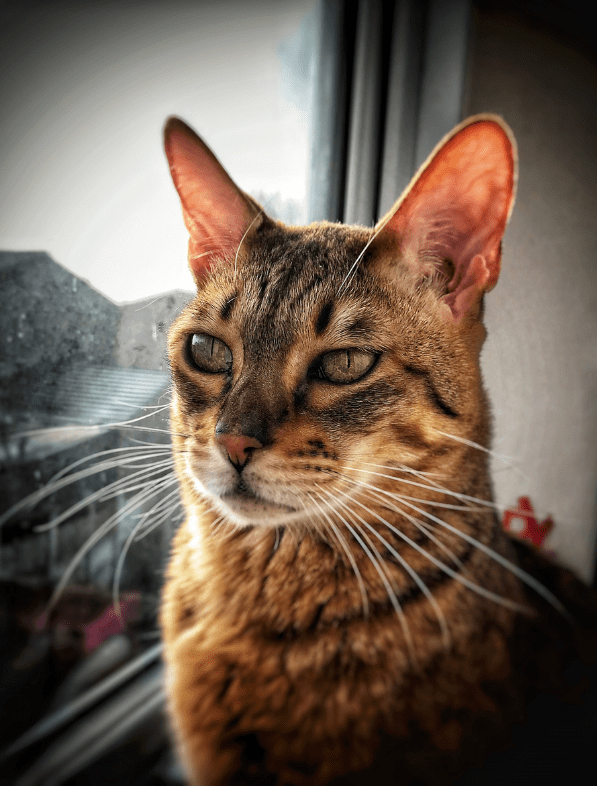 The bodies of Savannahs are long and leggy–when a Savannah is sitting, their hind legs are often higher than their spine, like a Cheetah. Their heads tend to be longer than they are wide, and like their serval ancestors, they have long necks. Also like servals, they tend to have spots on their ears, and their tails are about 3/4ths the length of other cats’.

The coat of a Savannah depends a lot on the breed of cat used for the domestic cross. Early generations always have some form of dark spotting on a lighter coat, and many breeders employ “wild”-looking spotted breeds such as the Bengal and Egyptian Mau for the cross to preserve these markings in later generations. The Savannah can have a tan coat with black or brownish spots, or a silver coat with dark spots, a marble pattern, and many other patterns and combinations, although the TICA breed standard limits member cats to Black, Brown Spotted Tabby, Silver Spotted Tabby and Black Smoke types only. 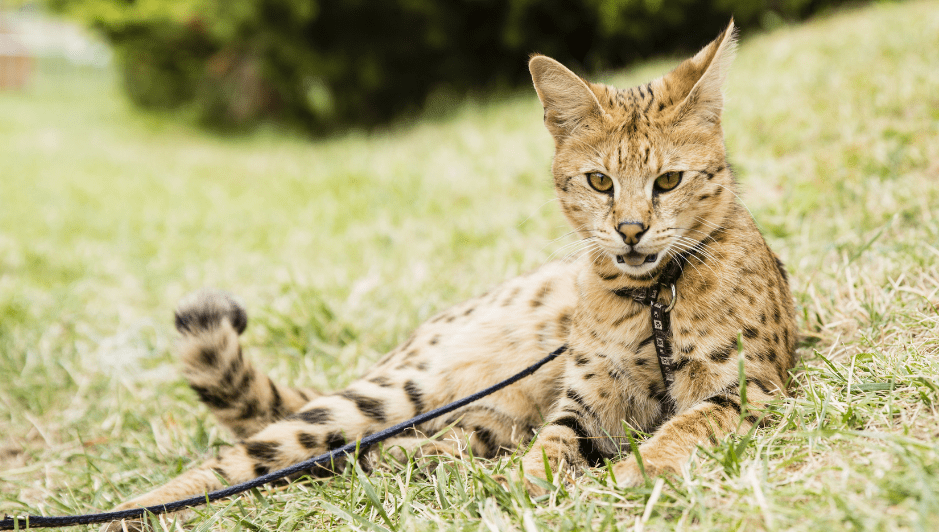 Temperamentally, Savannahs have been compared to dogs in their loyalty, and they will follow their owners around the house like a canine. They greet people with head-butts or sometimes pounces out of nowhere (many a guest entering a house with a Savannah have been pounced upon in the entry way!) They have a lot of energy and are social animals that do well with both cats and dogs.

Owners of Savannahs say that they are very impressed with the intelligence of this breed of cat. Savannahs have been known to get into all sorts of things; they often learn how to open doors, cupboards, and anyone buying a Savannah will definitely have to “Savannah-proof” the house to prevent their pet from getting into things it shouldn’t! Also, many owners have trained their Savannahs to walk on a harness and do various tricks like fetching toys.

Water isn’t a fear of the Savannah cat; they will jump right into the bathtub or shower with people sometimes, and get into pools and streams like their wild ancestors.

Vocally, like their serval parents and grandparents, Savannah cats normally “chirp” instead of meow.

Savannah cats have no special care or food requirements; they can eat cat food like any other domestic cat, use the litter box, and a normal veterinarian is qualified to care for one that needs a checkup or is sick.