The Chantilly/Tiffany is a striking feline with a semi-foreign body style and a full semi-long coat. The coat is silky, soft and smooth; the lack of undercoat makes grooming easy. Somewhat a late bloomer, the Chantilly/Tiffany is slow to mature and usually does not come into its full glory until about two years old. The eye color of the feline intensifies with age.

Originally found only in chocolate, today’s Tiffany/Chantilly comes in a range of colors and patterns. The color, like the coat, develops late. 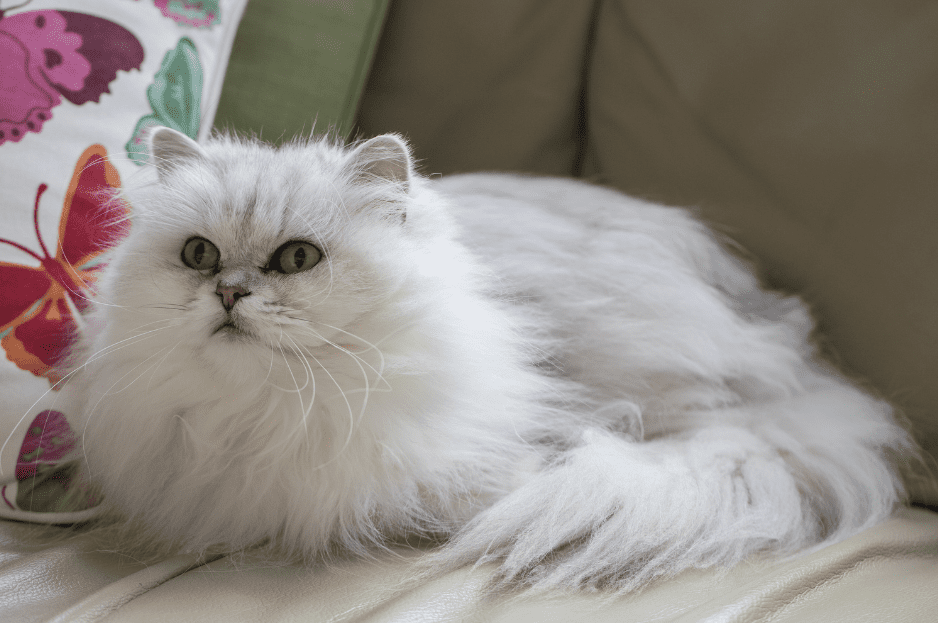 The Chantilly/Tiffany is a moderate-sized semi-foreign cat with a semi-longhaired, full coat and plumed tail. Its long ear tufts are one of the most striking features.

It is accepted in a variety of colors, including blue, chocolate, cinnamon, lilac, and fawn, in both solid and tabby patterns, though chocolate is the most well known.

The breed is friendly, loyal, and affectionate, though occasionally reserved with strangers. It is neither placid nor overly active — “moderate” is a word which crops up when discussing the Chantilly/Tiffany personality as well as its conformation.

The breed was originally registered during the 1970s in ACA as Foreign Longhair, though the name was changed to Tiffany. ACA dropped the breed due to lack of registrations. It was found later to be naturally occurring in Canada and the breed was resurrected, but by then a different breed called “Tiffanie” was being shown in Britain. The name “Chantilly” was adopted instead. It is still a rare breed.

The Chantilly/Tiffany is accepted in UFO for championship status and for registration in TICA.

The chantilly/tiffany, a dipped-in-chocolate brown feline breed with a confusing name, is prized for a beautiful semi-long coat, long, semi-foreign body style, and gently pleasing personality. While currently rare, the breed has a small but devoted group of cat fanciers with a taste for chocolate. In fact, this breed is billed as the chocoholics delight. 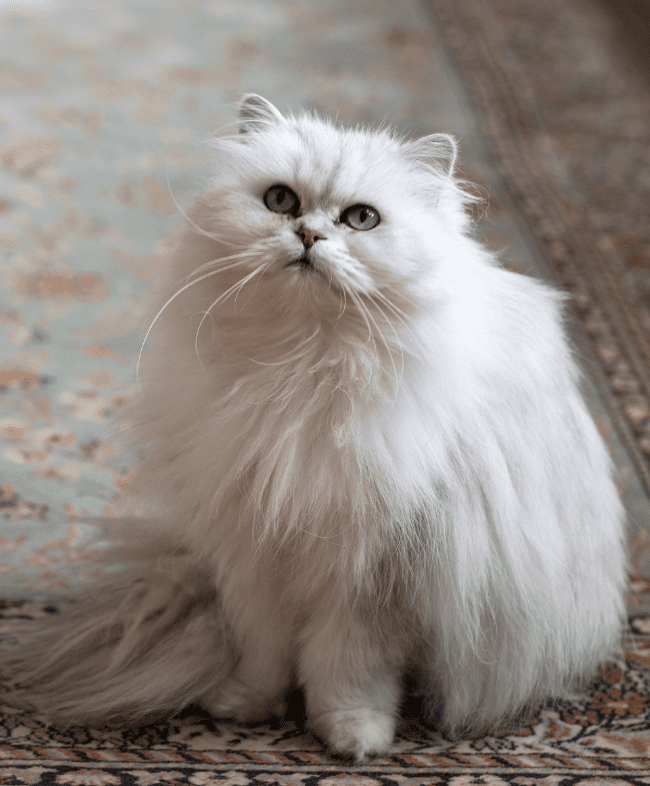 For a new breed, the chantilly/tiffany has been around for a long time. The breed was discovered in 1967 when the breed’s original proponent, Jennie Robinson, bought two longhaired chocolate-colored cats from a pet shop in White Plains, New York. The two – an 18-month-old male, Thomas, and a 6-month-old female, Shirley – produced their first litter in May 1969. During the next 7 years, Thomas and Shirley produced some 60 longhaired solid chocolate brown kittens. The American Cat Association (ACA) registered the cats as “sable foreign longhairs” and in the early 1970s Thomas and several kittens were exhibited in shows on the east coast.

Eventually, Robinson stopped breeding, but in the 1970s breeder Sigyn Lund bought Robinson’s cats and continued working with the breed. Because show judges thought the name “foreign longhair” was too general, Lund named the breed “tiffany” after the Tiffany Theater, whose name she associated with class and elegance. Since Lund was a Burmese breeder, fanciers assumed the breed was a longhaired Burmese bred from her stock, although this was not so. The misinformation spread, however, and articles and books repeated the error, creating confusion. In 1979, TICA accepted the tiffany, but in the Burmese breed section. ACA dropped the breed from recognition because it was so rare. When Lund stopped breeding in the mid-1980s, the breed came close to extinction.

The breed probably would have vanished if not for fancier Tracy Oraas of Onoway, Canada, who fell in love with the tiffany in 1988. After a lot of detective work, Oraas concluded that Burmese were never used in the breeding program. She and breeder Jan DeRegt created a new breeding program using European Angoras, Havanas, Somalis and nebelungs.

In 1992, Oraas was asked to rename the breed because of possible confusion with the British tiffanie. They chose “chantilly” because they wished to preserve the elegance the tiffany name represented. The breed is now known as the tiffany, the chantilly and the chantilly/tiffany, depending upon the cat association. Still rare, the breed is slowly gaining in both numbers and acceptance. 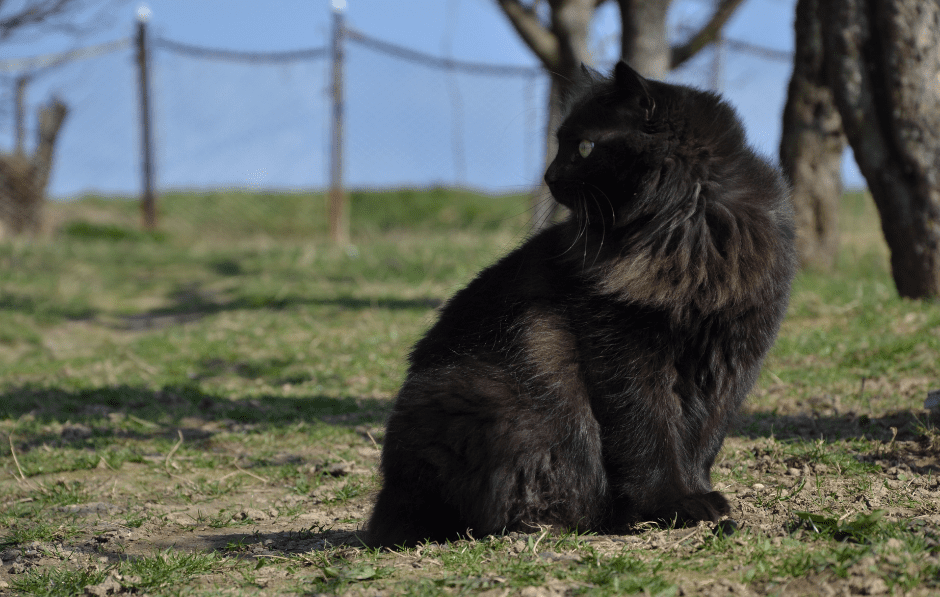 The ideal chantilly/tiffany is a striking feline with a slender, long, semi-foreign body elegantly clothed in glossy, silky semi-long fur. The fur lacks the downy undercoat that would mat easily. The tail bears a glorious plume, and ear furnishings extend from inside the ear like long streamers. A handsome neck ruff frames and softens the gentle contours of the face.

The head is a broad modified wedge shape with gentle contours, further softened by the long fur. The muzzle is strong, broad and softly squared. The vivid yellow, amber or gold eyes are modified ovals set far apart and at a slight angle. The ears are medium in size, rounded, and set well apart.

With a low-key, warm personality as pleasant as a cup of cocoa on a cold night, chantilly/tiffanies are gaining fanciers. They are gentle, quiet cats that nevertheless enjoy a good game of fetch, or any game in which you participate. They have temperate personalities – not too docile, too active, or too vocal – in fact, say fanciers, just right. They enjoy making conversation with their favorite humans but their voices are quiet. Their soft, sweet chirps sound a bit like pigeons cooing.

Chantilly/tiffanies usually bond with one or two family members and become devoted and loving but not overly demanding companions. They’ll follow you from room to room but won’t pester you for attention the way more active breeds will. Don’t get the idea that they don’t need companionship, though. Very people-oriented, chantilly/tiffanies need human interaction and don’t do well if ignored or left alone for long periods. Although loyal to their favorite humans, they are usually reserved around strangers.