The Turkish Van region of southeastern (Turkish: Van Kedisi, in Armenian: Վանա կատու) (also known as the Swimming Cat) is a rare, naturally occurring breed of cat originally found in the Lake Van Turkey. The word van refers to their color pattern, where the color is restricted to the head and the tail, and the rest of the cat is white. It is the maximum expression of the piebald white spotting gene that makes the van pattern. The spotting gene appears in many different species (like the horse and ball python). It also shows up in the common house cat, so a cat that shows this color pattern but is not registered or from the Van region, is called a “Vanalike”. 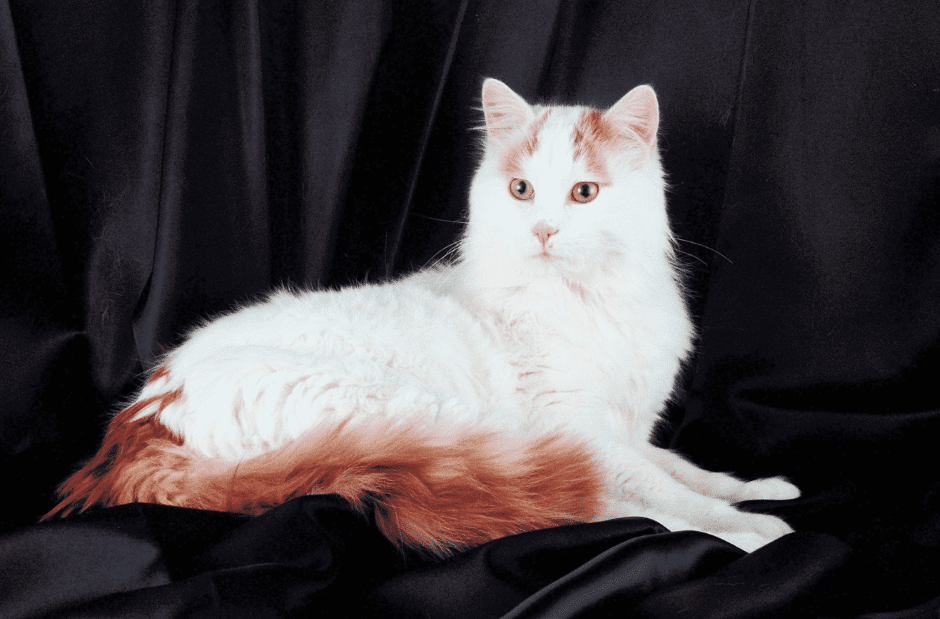 The coat on a Van is considered semi-longhaired. While many cats have three distinct hair types in their coat, guard hairs, awn hairs and down hairs, the Turkish Van only has one. This makes their coat feel like cashmere or rabbit fur, and the coat dries quickly when wet. Lake Van is a region of temperature extremes and the cats have evolved a coat that grows thick in the winter with a large ruff and bottlebrush tail for the harsh winters and then sheds out short in the body for the warm summers. The full tail is kept year round.

The Van is one of the larger cat breeds. The males can reach 20 lb (9 kg) and the females weigh about half of that. They have massive paws and rippling hard muscle structure which allows them to be very strong jumpers. Vans can easily hit the top of a refrigerator from a cold start on the floor. They are slow to mature and this process can take 3-5 years. Also, their fetching skills are quite good and they are quick to learn.

What might be the most interesting trait of the breed is its unusual fascination with water (cats, generally, dislike being immersed in water). The unusual trait may be due to the breed’s proximity to Lake Van in their native country; it may have acquired this trait due to the very hot summers and have extremely waterproof coats that make bathing them a challenge. As such, Vans have been nicknamed the “Swimming Cats” for this most unusual trait. Most Vans in the US are indoor cats and do not have access to large bodies of water, but their love and curiosity of water stays with them. Instead of swimming they stir their water bowls and invent fishing games in the toilet.

Breed standards allow for one or more body spots as long as there is no more than 20% color and the cat does not give the appearance of a bicolor. Although red tabby and white is the classic van color, the color on a van’s head and tail can be one of the following: Red, Cream, Black, Blue, Red Tabby, Cream Tabby, Brown Tabby, Blue Tabby, Tortoiseshell, Dilute Tortoise, Brown Patched Tabby, Blue patched Tabby and any other color not showing evidence of hybridization with the pointed cats (Siamese, Himalayan, etc). 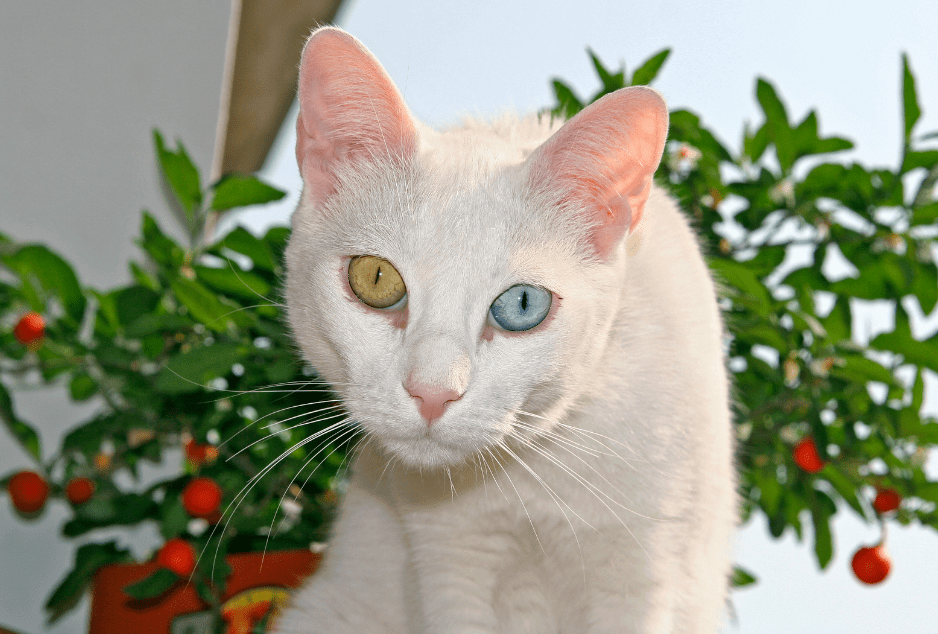 Turkish Vans are a naturally occurring breed of cat. They can still be found in east Turkey, near Lake Van. Their numbers have diminished, but both the Vans and the Turkish Angora, (which is a separate breed with different characteristics from central Turkey) are under the protection of the Turkish government and are bred at the Ankara Zoo. The genetic traits of the cats have not been modified from their originals and breeding programs seek to preserve their unique combination of athleticism and loyalty.

Vans are sometimes confused with Turkish Angoras, although a side-by-side comparison reveals vastly different characteristics. Angoras are named after Ankara (Angora) and descended separately from the Vans. Angoras also carry the W gene associated with white fur, blue eyes and deafness while Vans do not. Van eye color can be amber, blue or odd (one each, amber and blue) but Vans with two blue eyes are not deaf like Angoras.

Turkish Vans have been living in their native Turkey for thousands of years and various references to “white ringtail” cats through history show this. The classic red tabby and white pattern gives the ringtail appearance and has been found depicted on Hittite jewelry of antiquity. Also, archeologists have found “…relics of an ancient battle during the occupation of Armenia by the Romans included armor and banners displaying an image of a large white cat with rings on its tail.” 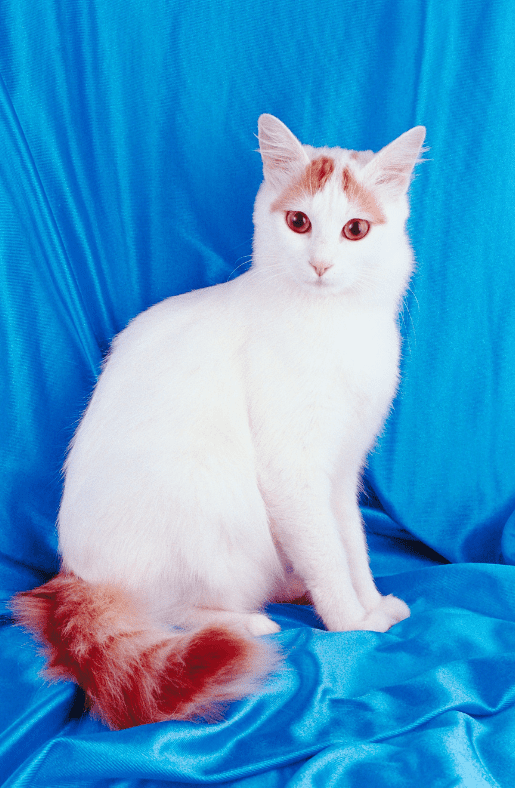 In 1955 two British women, Laura Lushington and Sonia Halliday, saw Vans in Turkey for the first time and decided to bring them home. They immediately bred true, confirming they are a true natural breed. A quote from Laura Lushington from the Complete Cat Encyclopedia, edited by Grace Pond and published in 1972:

“One of the two accepted breeds in Turkey, the Van Cat is now known in Britain as the Turkish Cat. Originating in the Lake Van area of southeastern Turkey, these cats have been domesticated for centuries (in fact for as long as the famous Saluki Hound); they are much loved and prized by the Turks for their exceptional character and unique colouring. Apart from their great capacity for affection and alert intelligence, their outstanding characteristic is their liking for water, not normally regarded as a feline attribute. They not only dabble in water and play with it, but have been known to enter ponds and even horse-troughs for a swim – they soon became famous as the ‘swimming cats.’ I was first given a pair of Van kittens in 1955 while traveling in Turkey, and decided to bring them back to England, although touring by car and mainly camping at the time – the fact that they survived in good condition showed up the great adaptability and intelligence of their breed in trying circumstances. Experience showed that they bred absolutely true. They were not known in Britain at that time and, because they make such intelligent and charming pets, I decided to try to establish the breed, and to have it recognized officially in Britain by the GCCF.”

The first Vans were brought to the United States in 1982 and accepted into championship for showing in the Cat Fanciers’ Association (CFA) in 1994. Since then, CFA has registered approximately 100 Vans born each year in the US, making them one of the rarest cat breeds. However, the gene pool thrives because it still uses Vans imported from Turkey. Imported Vans have no human breeding intervention and are quite robust.