Centipedes have a flattened, segmented body, long antennae, and many legs (each leg is slightly longer than the one in front of it). Centipedes have from 15 to about 177 segments (but most have about 15).

Each body segment has one pair of jointed legs attached to it. When a leg is cut off it will regenerate (grow back). The body is divided into two parts, the head and a segmented trunk. Centipedes breathe through spiracles, holes positioned along the length of the body. 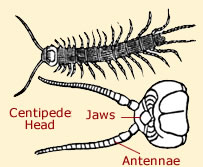 The centipedes head is quite flat and covered with a round or oval shield. It carries a pair of prominent antennae, which are the animals major sense organs, enabling it to smell and feel its way around. Many of the species are quite blind, but some carry a number of simple eyes on the front of their head shield. Even so, with a few notable exceptions, their eyesight is very poor.

The underside of the head bears a pair of stout jaws and two pairs of accessory jaws or maxillae, which hold the food whilst it is being chewed.

Curving around the sides of the head are a pair of stout poison claws with which the centipede catches and kills its prey. The poison produced by these claws is very strong and some of the large tropical centipedes can give a man a very painful and sometimes dangerous bite. Our British species however, are quite harmless, because they are all small and rarely able to pierce the skin.

Centipedes, like all arthropods, lack internal skeletons. Instead, they are covered with a hard exoskeleton made of cuticle, which protects the soft internal organs and also serves as an attachment point for the centipedes muscles. Most of the cuticle consists of chitin, which is the same substance found in crab shells.

Most species of centipede have only one claw at the tip of their feet and run and walk on tiptoe. The house centipede has a lengthened and flattened foot, which allows it to run faster than most species.