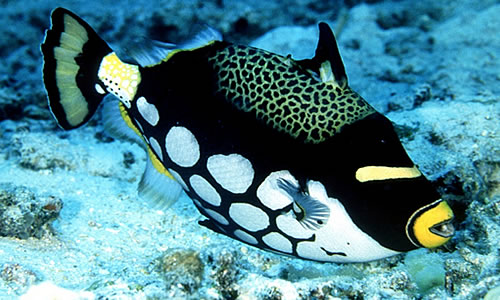 The clownfish, or anemonefish, are the subfamily Amphiprioninae of the family Pomacentridae. Currently 27 species exist, of which one is in the genus Premnas and the rest are in the subfamilys type genus Amphiprion. The other pomacentrids are called damselfish.

Clownfish are native to wide ranges of the warm waters of the Pacific and Indian Oceans. Clownfish are not found in the Atlantic Ocean. Clownfish live in a mutual relationship with sea anemones, or in some cases settle in some varieties of soft corals or large polyp stony corals. Once an anemone or coral has been adopted, the clownfish will defend it.

The anemone is required in nature because reef life is dangerous for small, brightly colored fish; in an aquarium lacking predators it is not needed. For this reason, clownfish never stray far from their host. In an aquarium, where they do not have to forage for food, it is very common for clownfish to remain within 6 to 12 inches of their host for an entire lifetime.

Clownfish and damselfish are the only species of fish which can avoid the potent stings of an anemone. There are several theories for how this avoidance is accomplished. Firstly, the slime coating of the fish may be based on sugar rather than proteins so anemones fail to recognize the fish as food and do not fire their stings. Secondly, the mucous coating may mimic the anemones own coating, a theory that is bolstered by the fact that it takes several days for a clownfish to adapt to a new species of anemone. There is no adaptation period when a clownfish is moved to another anemone of the same species.

Thirdly, their unique movements, which are unlike any other fish, may let the anemone know that they are not food. This theory is bolstered by the fact that juvenile clownfish, which have no coating, will immediately seek refuge in any compatible anemone and will not be stung. Juvenile clownfish will not survive for long without the protection of an anemone, and few find one before being eaten. Clownfish live in their anemone in groups. Usually a female lives with other males. When the dominant female dies the head male changes sex and becomes the female.

Clownfish lay eggs on any flat surface close to or under protection of their host anemones. These eggs are cared for by the male and hatched under complete darkness after a period of 7 to 10 days. Hatching occurs in a natural rhythm directly connected to the phases of the moon. Clownfish are omnivorous, their diets range from flakes to meat. They feed mostly on copepods and mysids, the undigested excrement from their host anemones.