You are here: Home / Dinosaurs / Dimetrodon

The Dimetrodon resembled much of what people would misclassify as a “dinosaur”, however it lived during the Permian period (about 260 million years ago) which is before most dinosaurs. It was about nine feet long, and had legs that were on the side of its body. Like most lizards in order to walk its body moved from side to side. This is a characteristic of animals with legs on its side rather than under it. The Dimetrodon also had a very large “sail” on its back, which is a defining characteristic of this animal. 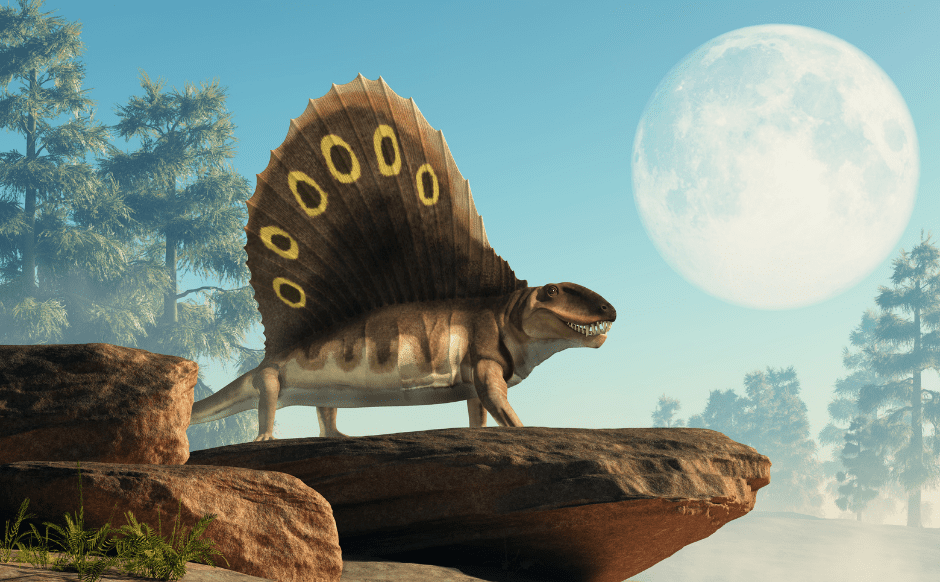 Dimetrodons were most active during the day. They were cold blooded animals which meant that their temperature was regulated by external factors (the sun, wind, rain). To get warm during the day these animals would tilt their “sails” towards the sun, and the blood going through this sail would heat up. This would give the animal the energy necessary to hunt and move. Dimetrodons were carnivores (meat eating animals) and would commonly hunt other smaller pelycosaurs such as the Edaphosaurus. They had two sets of teeth, one for biting and one for shearing. This would help with chewing down and ingesting food.

Dimetrodon fossils have been found in Russia, Eastern Europe, and the United States. In the U.S. they were found in Texas and Oklahoma. They were found so far apart because 250 million years ago the Earth’s surface was vastly different then it is now. The continents were all pushed together, and animals could easily span several continents. Dimetrodons lived throughout the Permian period, about 300-250 million years ago.

Dimetrodons can be seen in the popular video game World of Warcraft in Un’Goro Crater.