You are here: Home / Dinosaurs / Iguanodon

Iguanodons were semi large dinosaurs. They were about 30 feet long and weighed roughly 10 thousand pounds. The iguanodon measured about 16 feet tall at the head. It most likely walked on 2 feet and had two arms. The arms each had a hand with 4 fingers and one cone-shaped spike where the thumb would normally be. The legs of the iguanodon was much larger than its hands, and its tail was very long and stiff. The iguanodon’s mouth looked similar to a man that has his dentures in. They had teeth in their checks as well as a beak. 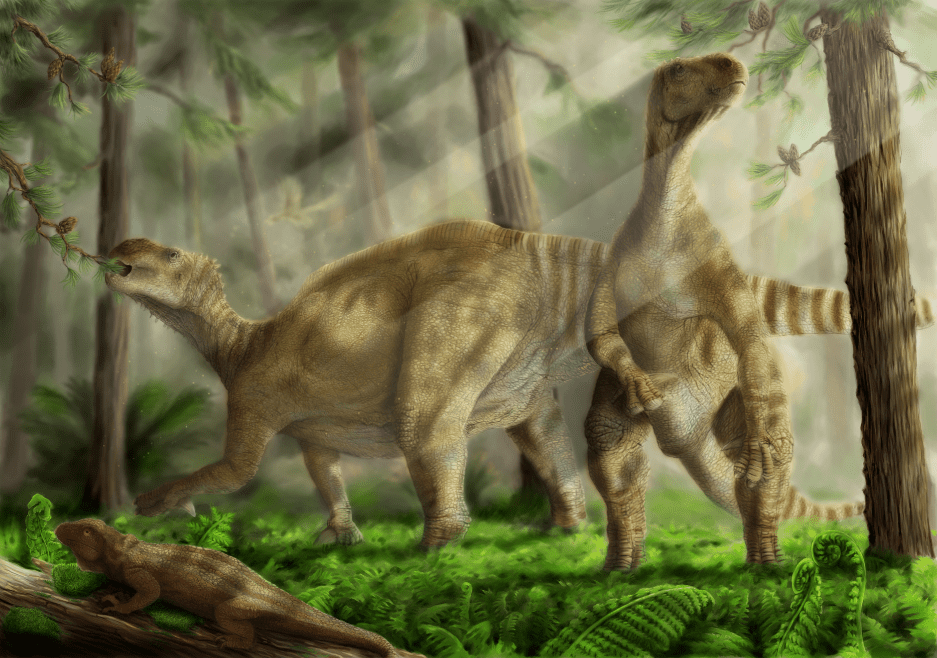 The iguanodon was likely a herding animal despite its size. It was a plant eating animal, and although it was very large it wasn’t nearly as big as other plant eating animals. Iguanodons likely used their thumb spike as their main defense, much like a human with a knife. Even though the iguanodon had a beak, it would chew plants with its cheek teeth.

Iguanadons lived in the early cretaceous period, roughly 125 million years ago. Fossils have been found in many continents considering this animal lived while Pangaea was beginning to split up. In Belgium discoveries were made and many bones of iguanodons were together, showing that they were in fact a herding animal.

The iguanodon was initially portrayed as an animal that walked on its four limbs. However later it was brought to the attention of paleontologists that the front limbs (arms) were much smaller than the rear limbs (legs).

In the beginning of research it was noted that the conical spike originated on their legs. It was until later that people realized the spike was attached to the hand