You are here: Home / Dinosaurs / Plesiosaurus

The plesiosaurus was one of the largest aquatic animals and lived throughout the cretaceous period). It grew up to twenty three meters long, making it among some of the largest sea creatures. Like other sauropterygians it was a very successful reptile that thrived during the age of the dinosaurs. The plesiosaur was easily identifiable by its four large flippers. The neck of this animal was very long similar to an Apatosaurus.

However, many illustrations of this animal show a swan like neck, but its neck was actually too long for this to be accurate. The blood would not be able to flow from its heart to its head. 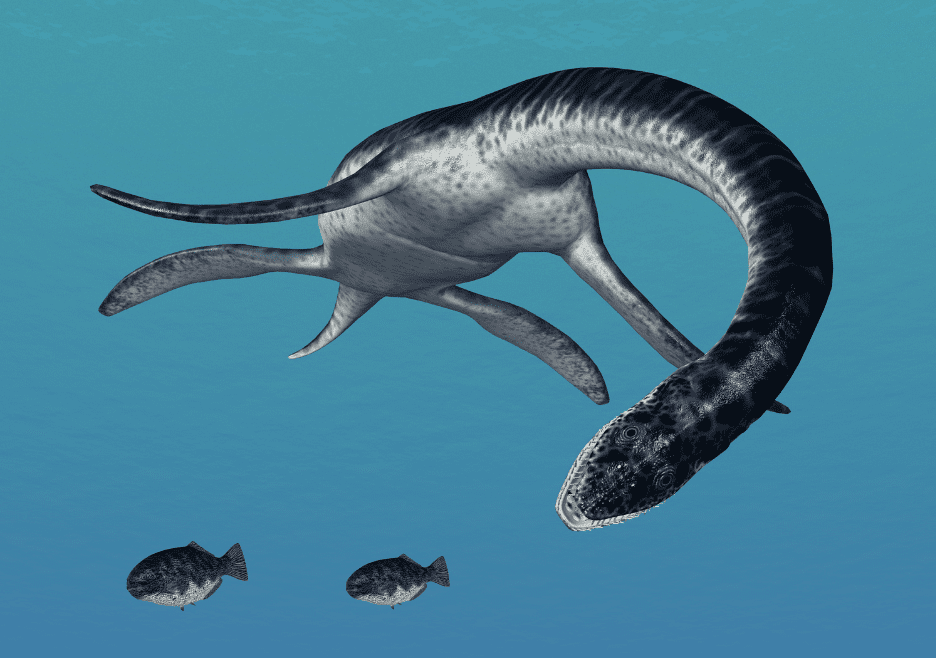 The plesiosaurus had very strong jaws, and ate squid like animals along with giant mollusks. It was one of the (if not the) largest aquatic carnivores, and would have to eat an abundance of food to sustain its girth. This animal was very large, and most likely did not swim very fast. Its primary form of defense was probably its very large size. The plesiosaur probably didn’t have to defend itself often, but it may have used its strong jaws to attack other large predators.

The plesiosaurus lived and thrived throughout the cretaceous period (up until about 65 million years ago.) Many plesiosaur fossils have been found along the coast of England. Many people have theorized that the modern day loch ness monster, along with many other myths is modern day plesiosaurs.

The plesiosaur is not actually a dinosaur. It was a sauropterygian.

It is portrayed in many illustrations that plesiosaurs attacked land animals, but a plesiosaur’s flippers could not support itself on land.

The modern day myth of a loch ness monster is always described as a plesiosaurus.