The Tyrannosaurus Rex (T-Rex) was a giant animal. They were about 15 feet tall and 40 feet long. That is a little bit longer than a typical school bus. Tyrannosaurus Rexes were one of the largest land meat eating animals (carnivores) of all time. They had an S Curve neck like most dinosaurs; however it was very muscular to support its giant head. The T Rexes head alone was 5 feet in length. They walked on two legs, and had very small forelimbs compared to the rest of the body. The tail of a T-rex was also very large.

The Tyrannosaurus Rex had a very long stride at about 13 feet long which enabled the huge dinosaur to run from 15 to 25 miles per hour. Its large tail acted as a huge counterbalance that enabled the dinosaur to turn quickly. The Tyrannosaurus weighed in at a massive 6 to 8 tons. That is the equivalent of about 3 cars. To fill its appetite it had to eat very large, slower animals. It’s top prey were the larger marginocephalians and ornithopods. He ate with 50 very large (up to 9 inches) teeth. 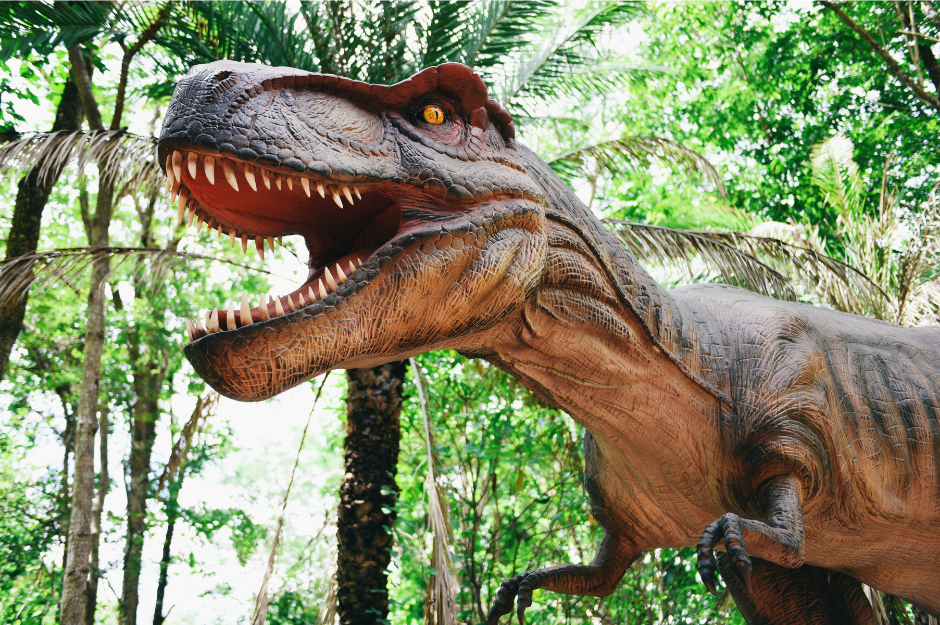 The Tyrannosaurus generally lived in larger forest climates. This is where it’s prey (plant eating dinosaurs) could be found much easier. Fossils of the T-Rex have been found in Mongolia and Western North America. The largest, most complete fossil of the Tyrannosaurus was found in South Dakota, United States. They lived in the cretaceous period (60-80 million years ago).

The Tyrannosaurus rex is the trademark of the dinosaur kingdom.

The t-rex has appeared numerous times on television and in movies, notably The Lost World, King Kong, Jurassic Park, and The Land Before Time.

The largest complete T-Rex skeleton was sold for 7.6 Million Dollars (USD) in 1990.