The Affenpinscher is a sturdy toy dog with a rough shaggy coat and hairy face. The Affen’s body is almost square being a little longer than its height. It has a short back that slopes down slightly to a high-set tail which is usually docked to two-thirds of its length where permitted.

The Affenpinscher’s head is round with a undershot jaw that protrudes below the short muzzle. The Affen has round and black eyes with V-shaped hairy ears that can be dropped or cropped and carried erect. The facial shape and expression may remind you of a monkey. The Affen has a thick, harsh and rough coat with long spiky hair on its head. The coat is usually plain black but black with gray, brown or red tones is also acceptable. Affens stand 9.5 to 11.5 inches tall at shoulder height and weigh from 7 to 8 pounds. 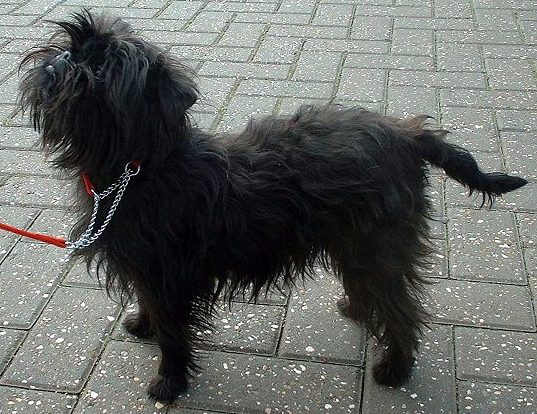 The Affenpinscher seems to have originated in Germany but little is known of its early history. Dogs similar to the Affen but somewhat larger were used as farm dogs and ratters as far back as the early 17th century. The breed was probably miniaturized during the 18th and 19th century. It was named “Monkey Dog” because of its monkey-like facial expression and curious temperament. The Affen seems to be related to the Brussels Griffon and also seems to have some terrier in its background. The breed was registered by the AKC in 1936 although the national breed club was formed later.

Today the Affen is primarily a companion dog. The Affen was ranked 125th out of 154 dog breeds registered by the AKC in 2005.

The Affenpinscher is lively, affectionate, loyal, comical and alert with a terrier-like temperament. Like most terriers they are busy, confidant, playful, mischievous and independent but unlike most terriers they seem to get along fairly well with other pets and dogs. This friendly and amusing dog loves its family and does well with older children. However Affens are not suitable for young children and toddlers as they are toy dogs and also because they are quite possessive of their toys and food.

The breed is quite intelligent and can learn fairly easily but Affens get bored easily unless training is made into a game. Like most toy dog breeds, the Affenpinscher may be difficult to housetrain.

Early socialization and obedience training is necessary to try and control its feistiness toward other dogs and its reactions to strangers. Affens make excellent watch dogs and do fine with first time or novice dog owners.

Affenpinschers get lots of exercise running around the apartment or the house and yard investigating everything that is going on. The breed adapts well to apartment life but loves to play games and be taken for a walk or drive. This toy breed does not enjoy temperature extremes. The Affen makes a good traveling companion. Use a harness when taking the Affen for a walk as the trachea is easily damaged.

The Affenpinscher does not need a lot of grooming beyond a weekly brushing and regular combing of its beard and mustache. The Affen is a non shedding or low-shed breed and its coat will need to be hand stripped or plucked several times per year. The Affen’s coat should not be clipped short as it will take a long time to grow back in.

Affens live for 10 to 13 years and are generally pretty healthy. Some bloodlines can suffer from luxating patella and cataracts. Like most short nosed breeds the Affen can have respiratory problems in hot and humid weather.