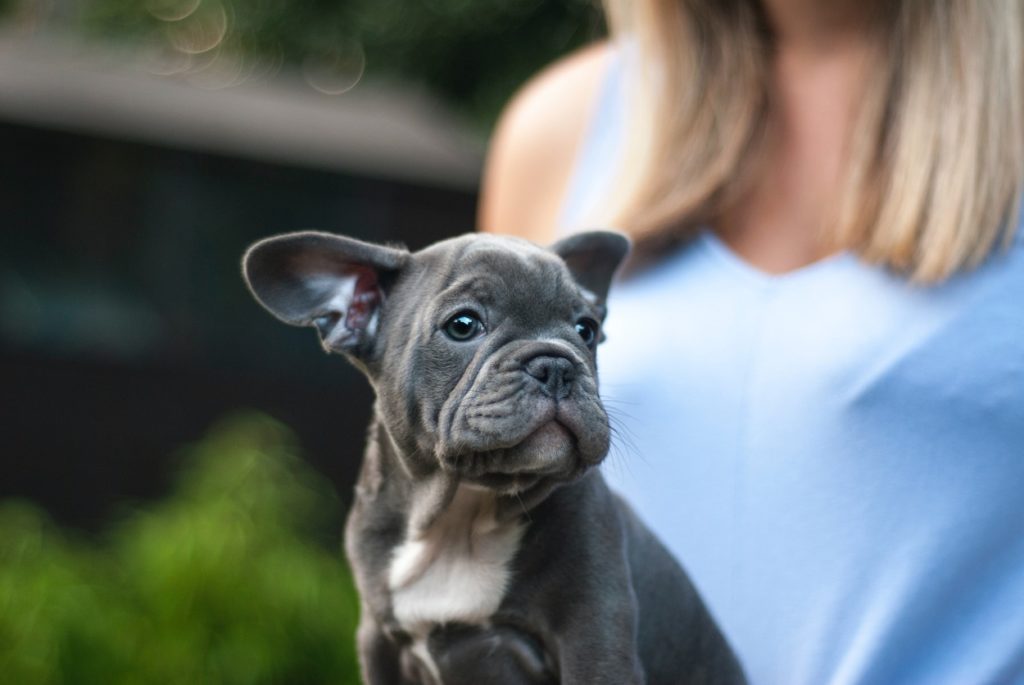 The Blue French Bulldog is an easy going and loving small dog with an unusual short coat – that’s a blue color! It has a flat face, big eyes and the characteristic French Bulldog bat ears.

Sometimes referred to as a:

This popular blue dog is one of the several French Bulldog colors within the French Bulldog breed; not a separate dog breed. Its grey-blue coat color is not a standard color and therefore not recognized by the various official dog breed associations, such as the American Kennel Club (AKC).

Although a Blue French Bulldog puppy draws attention with its striking blue coat and is considered a very cute little dog it is known to suffer various health problems.

A brief history of the Frenchie

Fact: Believe it or not, the Blue French Bulldog did not originate in France, it actually originated in Nottingham, in the North of England, in the United Kingdom.

During the 1800s, the North of England was famous for making lace.

In the late 19th century, this breed made it to the US and in 1897 the French Bulldog Club of America was founded. This is the oldest Bulldog club in the world.

The different types of Frenchies

The only real difference within the Frenchie breed is their coat color and eye color.

Frenchies come in a variety of colors of which the Blue Frenchie is one. Frenchies with the blue coat color can be registered by the AKC but are not recognised as ‘breed standard’ so this color cannot compete as a show dog in competitions, unlike the other Frenchies.

The officially accepted coat colors for Frenchies are brindle, cream, fawn, fawn brindle and white or any combination of these colors; but not the blue coat.

It is sometimes called a ‘Rare Blue French Bulldog’ and the French Bulldog Club of America refers to it as a fad color or disqualification color. The FCBA strongly discourages the breeding of this coat color as they believe such breeders place more importance on breeding for color than considering the potential health issues.

The blue color is due to a recessive gene known as the dilution gene.

Blue Merle – is considered the most attractive color but most difficult to breed. It requires mating a merle Frenchie with a blue Frenchie. The result is a coat with patches of blue color from the dominant merle gene and leaves the rest of the coat the original color. The pattern on each dog varies in size, shape and location on the coat.

Blue Pied– this coloring is easy to breed but difficult to predict the pattern. It requires mating a pied Frenchie with a blue Frenchie. The coat color will be a mix of fawn, cream and brindle, with a lighter coloring on the chest area, cheeks and legs.

Blue Brindle – this has an obvious blue/grey coat color with brindle markings too.

Blue Fawn – carries the double recessive dilution gene of the blue and pied colors and 2 additional genes giving the fawn color. The darker blue color has a brindle gene too which can be seen around their eyes, ears, muzzle and back. This unusual color blend makes it one of the most popular for Frenchie owners.

Their eye color can be blue, brown, grey or yellow

Whatever the color of your Frenchie, there is no doubt that this is a stunning small dog, especially the Blue French Bulldog puppy. 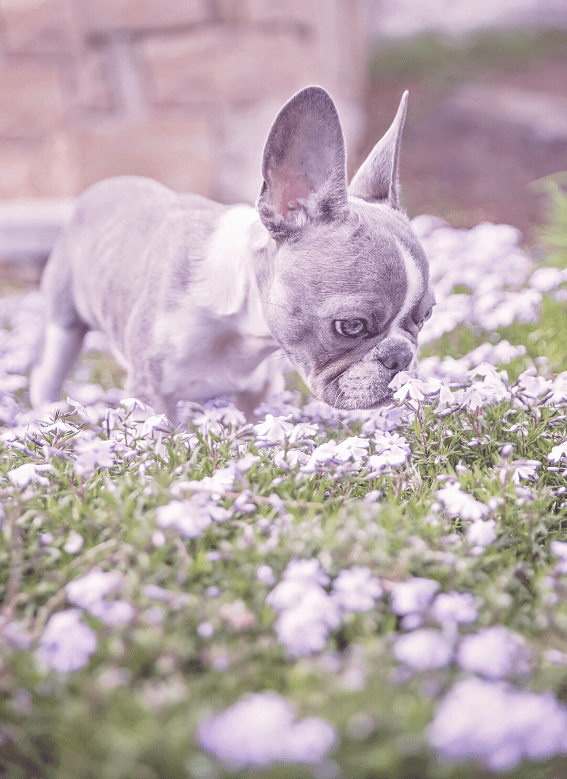 What are the main characteristics of a Blue French Bulldog?

The blue Frenchie has a blue colored coat, ranging from dark blue/grey to a lighter blue color, with blue eyes and a blue nose!

This compact little dog is sensitive, friendly, gentle and craves attention. It will be an incredibly loyal and friendly member of the family and loves company.

The Blue French Bulldog is not overly active, unfairly described as lazy, but with encouragement it can be lively and enjoy going for short and regular walks. It is good natured around children, strangers and other dogs. It does not like to be left alone.

The Blue French Bulldog is a very popular small dog, due to its good nature and unusual coloring. The Blue Frenchie is ranked the 6th most popular dog in the US, and 4th in world.

They are stubborn but easy to train. They love to please their owner but lack energy and stamina so care and time is required. They like their food so training should use be positive reinforcement and small food based treats. Early leash training is recommended in the Frenchie Puppy years. The Blue French Bulldog cannot swim!

The Blue Frenchie is of average intelligence and does not have a high energy level or great stamina so care should be taken not to over-exercise as they are prone to overheating easily.

Early socialization and discipline is always recommended with any dog breed. This breed is not known to be aggressive and with its low energy levels is unlikely to run off. It likes company and playtime.

The Blue Frenchie is happy, outgoing and well behaved. They want constant company and attention and due to their low energy levels and small size they make good apartment pets. They are good around all ages and other dogs.

The Blue Frenchie is considered a small-sized, compact purebred dog. Unlike many breeds, there is little difference in the physical attributes between the male and female.

The Blue Frenchie is an easy going, good natured friendly little dog that loves company. A good companion dog that is suited to apartment and city living as they are not particularly active and don’t bark much.

How should you train a Blue French Bulldog puppy?

Train your Blue Frenchie puppy early. They can be stubborn and lack a lot of energy but still need to be able to go out in public and know how to follow orders – for safety and socialization.

Like all puppies there are various types of recommended training: obedience, discipline, agility and socialization.

So, if you are not going to use a professional dog trainer:

1) Develop your basic command words: Find keywords such as Stop, Sit, Wait etc. and be consistent each time you use them. Use small treats as a reward in early training.

2) Crate – Buy a crate and get puppy used to going into it. This will eventually become its nest and it will sleep there. You will have to lock the cage in the early days so it knows it has to sleep there and useful experience when transporting your pet.

3) Potty training – May be hit and miss for a new puppy who gets easily excited and lacks control, however products are available, such as mats and odour sprays to attract puppy go to the same spot each time

4) Walking on a leash -Voice commands and road awareness is important for a Blue French Bulldog puppy’s safety, as they can get lively when excited and tug on the leash when walking.

The Blue Frenchie has a brachycephalic shaped face. This is a typical flat face, shortened muzzle with narrow nostrils, which means that they will struggle when breathing to get enough oxygen into their body.

Breathing difficulties – A brachycephalic breed, can suffer from obstructed airways and they get out of breath easily. They are also at risk of overheating and they snore!

Alopecia – a painful skin disorder, common in the blue part of the coat that causes hair loss. It can also cause sore wrinkled skin, like an allergic reaction or dry, flaky skin or brittle hair. It can be itchy and scratching can cause bald patches.

Color Dilution Alopecia (CDA) is caused by a faulty gene carried by both parents, so if both parents do hot have it the puppy will not inherit it. It is not always obvious in the Blue Frenchie puppy and may not show until later in life.

Skinfold dermatitis, where the folds of the skin can become infected through trapped food or heat-sores. 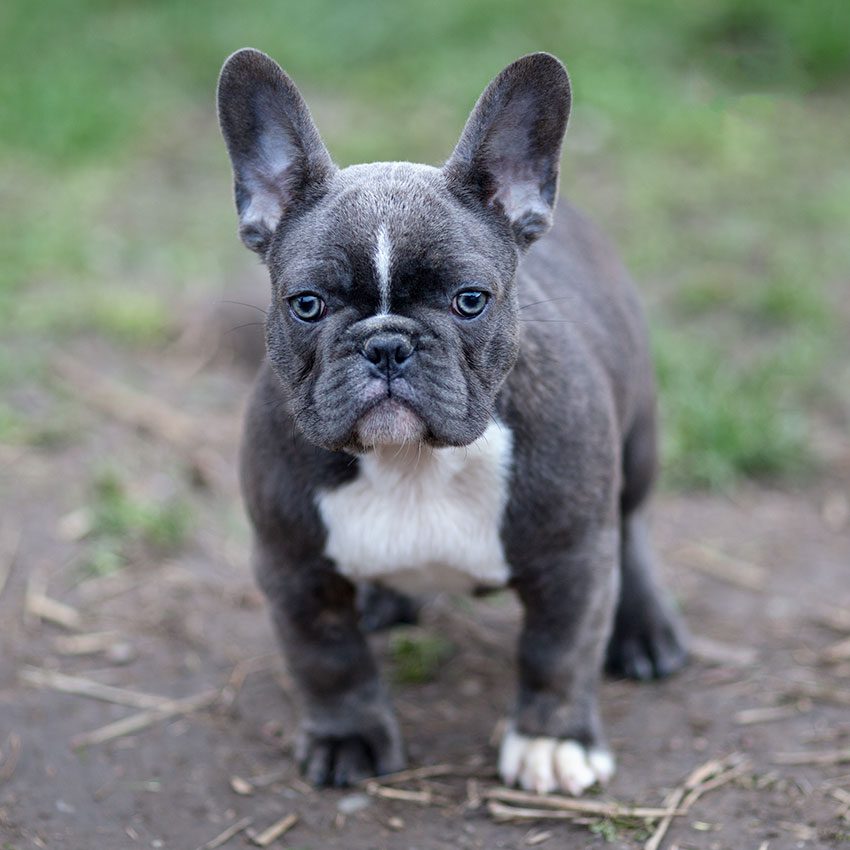 They’re not overly energetic, due to respiratory problems around 1 hour a day is enough, possibly split onto several small walks.

Feed as a small-sized dog, but must not get overweight. A slow feed bowl is recommended.

A smooth, short-haired dog that’s a light shedder, therefore only needs weekly brushing and a daily wipe over with a soft glove.

Bathe when needed, but not too often as their coats contain natural oil, which can be stripped with over-bathing. Certain dog formulated shampoos have double effect of cleaning the dog coat and protecting it against fleas and insect bites.

Check teeth to prevent a build-up of plaque. Nails and their bat ears need to be checked for infection.

Positives and Negatives of ownership

Q. How much does Blue French Bulldog puppy cost?

Q. Why are they so expensive?

A. They are expensive and difficult to breed because of their shape. They have a short body and hips and natural mating is not possible so artificial insemination has to be used. A natural birth is not possible because of the mother’s small hips and the size of the puppy head so delivery is by scheduled caesarean (C-section). The whole process is costly and only produces 1-2 puppies per litter.

Food will cost around $30 per month, plus Vet’s fees and accessories.