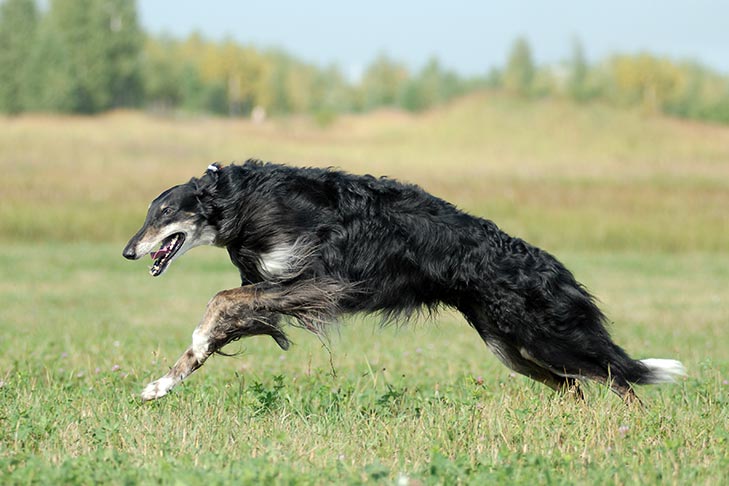 The Borzoi is a tall, lean and aristocratic looking dog that belongs to the group of sight hound dog breeds. In fact the Borzoi resembles another sight hound, the Greyhound, only with long hair.

Borzois are also known as Russian Wolfhounds. This Wolfhound has a long narrow head with almost no ‘stop’ at its eyes and small ears that lay flat against its head. This hound has a long, silky and wavy coat with a thick mane or ruff at its neck.

This hound’s body is strong, athletic and built for speed.

The Borzoi’s gait is fluid and a beautiful movement to watch. All colors are acceptable but most Borzois are white with darker markings. Male hounds are approximately 30 to 33 inches tall at shoulder height and female dogs about 27 to 30 inches.

History of the Borzois

The Borzoi was developed for speed and endurance in the harsh Russian climate. The word ‘borzoi’ in Russian means swift. These Russian Wolfhounds were owned by the aristocracy in pre-revolutionary Russia and used for the popular sport and pageant of wolf hunting.

The Wolfhounds were brought to England as a gift for Queen Victoria in 1842 and were first exported to the U.S. in l889. The Borzoi was ranked 89th out of 154 dog breeds in AKC registrations in 2004.

Temperament of a Borzois

Borzois are kind, gentle, well-behaved indoors and a quiet dog breed. This breed likes lots of attention and loves to recline on a soft bed, a lap or even a couch. Like many sight hounds, Borzois are content to be ‘couch potatoes’ when they are inside.

Borzois enjoy the company of other sighthounds but the breed is not good with small pets and young children unless raised with them. Borzois don’t need an exorbitant amount of exercise and should never be let off leash except in an enclosed fenced-in area.

These Wolfhounds, like all sight hounds, will rapidly chase after any small animal it considers as a prey. Borzois are slow to mature but that doesn’t mean they shouldn’t have early socialization and play-type obedience training when they are puppies.

These Wolfhounds are somewhat wary of strangers but don’t make particularly good watchdogs. The breed is intelligent but they are difficult to obedience train to a high level. Borzois require knowledgeable training and do best with experienced owners.

Borzois can adapt to being left alone during the day as long as they receive morning and evening walks and lots of attention. They don’t require excessively long runs or vigorous exercise and indoors they behave like couch-potatoes. This breed shouldn’t be left alone in a fenced yard as they can jump 6 foot fences.

Borzois shed their coats in the spring and to a lesser extent in the fall. During these periods of shedding, these hounds should be brushed daily. The rest of the time, Borzois only need to be brushed a few times per week and dry shampooed when necessary. Clip this hound’s hair between the toes to make them more comfortable.

Borzois should live from 9 to 12 years and are usually fairly healthy. These dogs are subject to bloat and should be fed smaller meals 2 or 3 times per day. Borzois should avoid exercise immediately after eating.