The Bouvier des Flandres is a large, powerful dog that is also known as the Belgian Cattle Dog. This rough-coated dog is one of the herding dog breeds and as a result it needs lots of space and exercise. The Bouvier has a large and heavily coated head with distinctive moustache, beard and shaggy eyebrows. The Bouvier has a coarse and wiry outer coat, about 2 ½ inches long, with a thick, dense undercoat.

The Belgian’s coat colors range from fawn to black, including brown with black streaks. Male Bouviers range from 23 to 28 inches and female dogs from 22 to 27 inches at shoulder height. Male dogs can weigh from 75 to 95 pounds with females a little lighter at 65 to 85 pounds. The Bouvier is a member of the American Kennel Club (AKC) Herding Group. 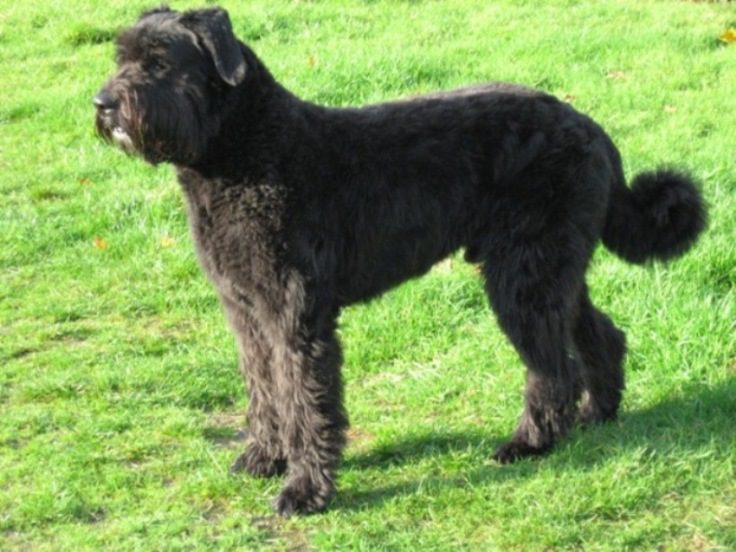 The exact origins of the Bouvier are unknown. Some experts say these Bouviers date back to the 16th century Flanders area in Belgium where they were used to drive cattle and pull carts. A literal translation of the name means ‘ox-drover of Flanders’. During World War 1, the Bouvier was used by the army to carry messages and find wounded soldiers.

The breed almost became extinct during the war until Flemish breeders rescued the breed in the 1920’s. The Bouviers were imported to the U.S. in the l930’s where they are employed as guide dogs guard dogs, tracking dogs and family companions. The Bouvier was ranked 83rd out of 154 dog breeds in AKC registrations in 2004.

Bouviers are sober, alert, quiet and even tempered rather than clownish. Although these cattle dogs are athletic and agile, they can be somewhat lazy unless they are given lots of physical exercise. The breed is very intelligent so it is equally important to provide it with lots of mental stimulation in the form of advanced training in obedience, agility or tracking.

Bouviers love to be close to the family or ‘flock’. These dogs are very good with children, and other pets, if they have been raised with them and are very protective of their family. Bouviers are somewhat suspicious of strangers and can be quite territorial. Bouvier puppies need patient and early obedience training and socialization that is positively reinforced as they grow older. The Bouviers’ intelligence and loyalty to its master, ensures fairly easy training.

This breed makes excellent watchdogs and guard dogs. Bouviers can be strong willed during the puppy and adolescent periods and need an experienced and confident owner.

Bouviers need regular exercise and do best in a rural environment or at least a house with a large fenced backyard. This shaggy breed is not for the homeowner that prizes an immaculate house. These hairy dogs tend to track in a lot of water and mud.

Bouviers need to be brushed several times a week and their coat needs to be trimmed three or four times per year. These dogs need any excess hair in the ears and between the toes removed on a regular basis. This breed is a very light shedding dog if properly groomed and is often referred to as ‘hypoallergenic’

Bouviers live from 10 to 12 years and common health problems include: twisted stomach, bloat and hip dysplasia.