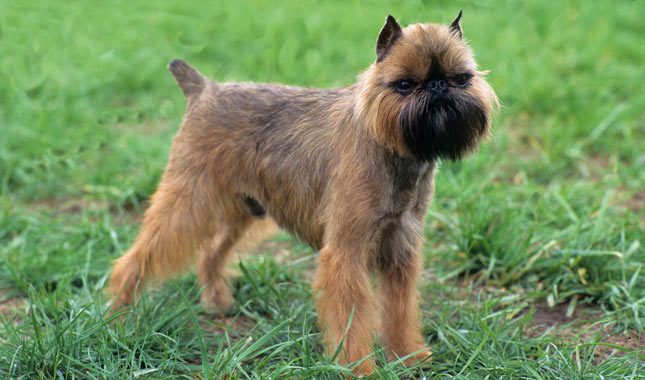 The Brussels Griffon or Belgian Griffon is a small dog with a square body, sturdy build and fairly deep chest. This Belgian toy dog breed has a large domed head with an undershot jaw and a very short muzzle.

The tail is carried high and where permitted it is customarily docked to about one-third of its length. The ears are semi-erect and can be cropped or left un-cropped. The legs are straight with short and round “cats” feet.

There are two varieties of coat – the Rough coat and the Smooth coat. The Smooth-coated Griffon has a smooth, sleek and short coat like a Boston Terrier and is called the Petit Brabacon.

The Rough-coated Griffon has a harsh, wiry and dense outer coat with an undercoat that ranges from soft to almost as harsh as the outer coat. The head is fringed with longer wiry hair around the eyes, nose, cheeks and chin.

Griffons stand about 8 to 11 inches tall at shoulder height and can weigh from 7 to 12 pounds.

History of The Brussels Griffon

The Brussels Griffon is named for the city of Brussels, Belgium. This breed was developed in Belgium and is also known as the Belgian Griffon and the Petit Brabacon.

In the early 19th century, coachmen kept small terriers similar to the Affenpinscher, as ratters in the stables. Later toward the mid 1800’s, Pugs and English Toy Spaniels were crossed with these small Belgian Affenpinscher-type dogs.

The Pug influence produced a Smooth-coated Griffon called the Brabacon. The King Charles (black and tan) and the Ruby Varieties of the English Toy Spaniel influence resulted in Rough-coated Griffons.

Today the Griffon makes a great companion dog. The Griffon was ranked 60th out of 154 dog breeds registered by the AKC in 2005.

Temperament of a The Brussels Griffon

The Brussels Griffon is affectionate, alert, inquisitive, cheerful and has some terrier-like qualities. The Griffon has lots of personality and hates to be left alone. The breed becomes strongly attached to their families and wants to be taken everywhere.

The Griffon is active and playful and gets along well with older children. Griffons are intelligent and eager to learn and like to learn to do tricks. Although spoiled Griffons can be quite demanding, they are usually an obedient breed.

Griffons seem to like and get along well with other pets including cats and dogs, strange animals and strangers – who nevertheless they will announce with a bark. The Griffon, like most Toy Dogs, is difficult to housebreak.

The Brussels Griffon adapts easily to any environment and does equally as well in an apartment or in a farm house. Griffons need moderate exercise and playing in the apartment or in the backyard is usually sufficient for their needs.

However the Griffon loves to go everywhere with his family and will enjoy a walk or off leash run. Griffons don’t like to roam and will stay close to their family. The breed is surprisingly nimble and agile and will enjoy obedience classes.

If the dog isn’t being shown then some judicious clipping will reduce the grooming requirements. Griffons are low-shedding dog breeds.

Griffons can live for 10 to 13 years and are generally pretty healthy. Some bloodlines can suffer from luxating patella, progressive retinal atrophy and cataracts. Accidental eye lacerations can be a problem.

Like most short nosed breeds the Griffon can have respiratory problems and suffer from heatstroke in very hot and humid weather. Information on these genetic diseases can be found in our article Hereditary Diseases in Dogs.