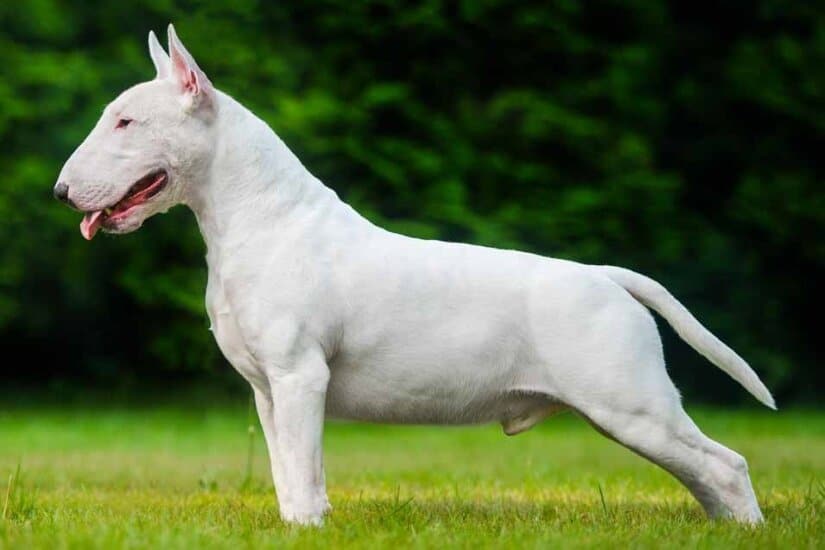 The Bull Terrier or ‘Bullie’ is a lively and powerful dog. This breed has a long, egg-shaped head with a convex shaped profile without a definite stop. The Bullie’s body is short and well muscled with a broad chest.

This Terrier’s coat is short, harsh and lies flat on the body giving a fine sheen or gloss to the coat. Bullies are usually white in color and can have head markings. Another variety of Bull Terrier called the ‘colored variety’ can have any color of coat.

The Bull Terrier or English Bull Terrier was developed in the mid-19th century by crossing the Bulldog and the now extinct English Terrier. The intent of the breeding was to develop a more agile fighting dog.

Later refinement in the breed has resulted in the Bullie becoming a much gentler dog. The Bull Terrier was ranked 68th out of 154 dog breeds in 2004 AKC registrations.

Bull Terriers are fearless, assertive, comical and mischievous. The breed is loyal, affectionate and loving and can make a good family pet. Bullies are probably too exuberant for small children but will do fine with older children who are taught not to tease these dogs.

Bull Terriers need lots of attention and can be kept in the city if they are involved in family activities. These dogs can be quite strong willed and are difficult to train. The breed needs early socialization when they are puppies and on-going obedience training.

Male Bullies, especially those which haven’t been neutered, can be extremely aggressive with other male dogs and even other pets. Bull Terriers need lots of attention or they can become destructive when bored. Bullies make good watchdogs.

This breed needs an experienced dog owner and may not do well with a novice owner.

This breed needs moderate but regular daily exercises and playtime. Bull Terriers must be kept on a leash at all times to prevent them from fighting with other dogs. They can adapt to apartment life if given lots of exercise and attention.

Bull Terriers require minimal grooming beyond an occasional brushing. This breed is an average shedder.

Bullies have a life expectancy of between 11 and 13 years. Most Bull Terriers are fairly healthy but some common problems include heart or kidney disease and occasional deafness in white colored dogs.