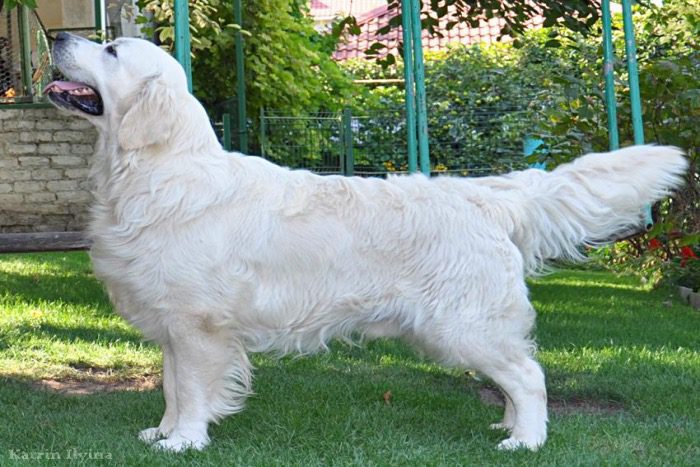 Anyone who has ever seen a Golden Retriever can easily see huge similarities to its lighter colored counterpart, the English Cream Golden Retriever. So, what is the difference between the two? And are they, or are they not, separate breeds?

First, let’s lay some widespread speculation to rest. The English Cream Golden Retriever is not a different breed to the Golden Retriever. Some breeders have tried to rename lighter colored Golden Retrievers in an attempt to convince would-be buyers that they are getting a very rare dog.

The very first known Golden Retrievers were bred in Scotland in the mid to late 1800’s by Baron Tweedmouth of Guisachan. The breeds he crossed are two now-extinct dog breeds, the Wavy Coated Retriever and the Tweed Water Spaniel. The four puppies that resulted from this cross were the first Golden Retrievers, and, as such, they were also the first English Cream Golden Retrievers.

The American line of Golden Retrievers, first imported to the United States through Canada, has somewhat changed over the centuries, as some physical features and genetic traits show, but make no mistake, both variations are descended from the same original crossbred pair, and both are purebred Golden Retrievers.

The breed standard for Golden Retrievers, including the lighter variations, includes any of the following shades of coat color: cream, light golden, golden and dark golden. White or platinum coats are not considered acceptable according to the standard.

The Golden Retriever Club of America tends to be less inclusive of paler shades than The Golden Retriever Club of Canada, however, it should be noted that neither of these clubs, nor the American Kennel Club, consider white or platinum dogs to be accurate to the breed. Reputable breeding programs will purposefully remove paler dogs from the breeding stock for this reason.

Many disreputable breeders will attempt to sell white or platinum dogs by marketing them as rare specimens when, in fact, anything paler than cream, such as white or platinum, is considered a flaw by both the Kennel Club of the UK and the American Kennel Club. Puppy Mills try to sell these flawed variations by labeling them with fancy names like the Exquisite Platinum Imported Golden Retrievers and the Rare White European.

A good breeder will tell the truth about the English Cream Golden Retriever, and will not sell a would-be owner a puppy that does not meet the breed standard. Always ask to see health clearances and papers showing lineage, where possible, whenever you adopt or buy a Golden Retriever, no matter what shade of “gold.”

Other Physical Features Of The Breed

The Golden Retriever is a medium sized dog with a muscular, athletic build. They range in size from around 21 to 24 inches in height and can weigh anywhere from 55 to 75 pounds.

While all shades of Golden Retrievers are the same breed of dog, the bloodlines from different countries show some differences. For instance, dogs bred in the United Kingdom, and throughout Europe, tend to be slightly smaller, but with a broader head and body overall.

Dogs bred in America tend to be taller, as do the retrievers from Canadian bloodlines. The Canadian dogs tend to be the slimmest of all the variations.

Statistics seem to indicate that the paler coated English Cream dogs of the breed live anywhere from six months to two years longer than the darker coated dogs. However, there is no hard evidence to suggest that this tendency is absolute, or that it will continue. Most of the lighter colored retrievers bred in the UK live around 12 years, while the darker coated dogs bred in America tend to live for 10 to 11 years.

Another tendency, according to some sources, that seems to show up more in the darker coated dogs is a risk for Lymphosarcoma, a cancer that affects blood cells and lymphoid tissues. Cream colored retrievers seem to have around a 38% chance of developing cancer, and the darker golden coated dogs, on average, seem to have a 60% chance. However, it should be noted that these risks are averages based upon known records, and individual dogs will have different tendencies based on specific bloodlines. Again, these tendencies should not be seen as absolutes.

Other common concerns for this breed include hip dysplasia and elbow dysplasia. These genetic conditions, common among many large dog breeds, are caused by malformation of the joints. In some cases, dysplasia may result as a secondary condition from obesity. These conditions can generally be managed with medication. Another disease that affects the joints, Osteochondritis Dissecans, is common in Golden Retrievers as well.

Most Golden Retrievers, whatever their coat color, will live fairly long, healthy lives given a balanced diet, plenty of exercise and a loving home.

Typical Temperament Of The Breed 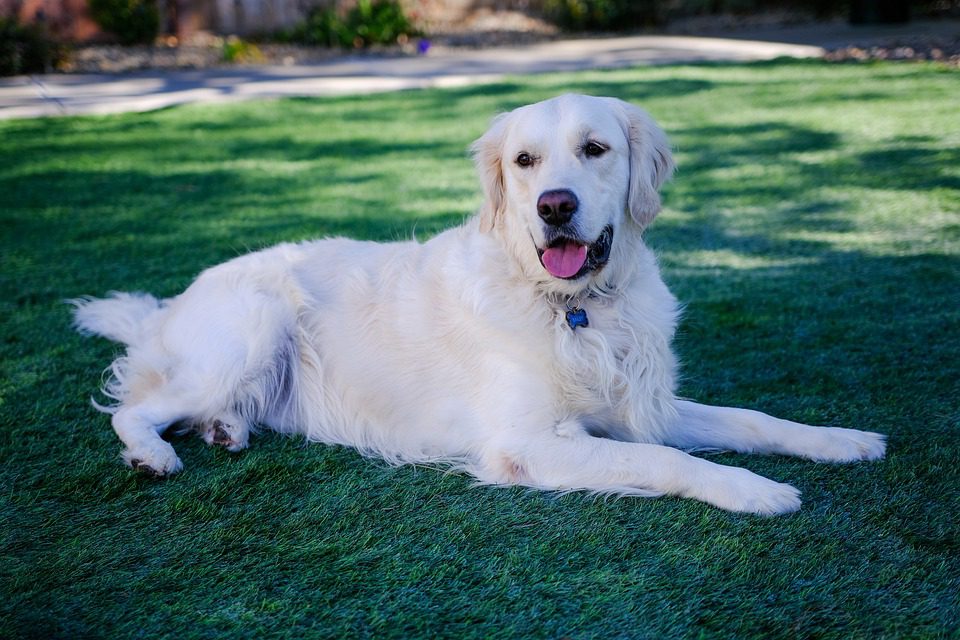 The Golden Retriever is one of the most friendly and even-tempered dogs you’ll ever find. In addition to being loving and loyal companions, they are also highly intelligent and easy to train.

Their playful attitudes and affectionate personalities make them wonderful dogs for children. Golden Retrievers are always excellent choices for service dogs as well.

In short, the Golden Retriever is the epitome of the saying, “A dog is man’s best friend.”

Intelligence And Training For the Breed

Golden Retrievers are known for their intelligence, and they are easy to train as family pets, show dogs and hunting dogs. The first litter of Golden Retriever puppies were used as gundogs because they had a very “soft mouth” grip and showed great skill at retrieving game for hunters, both on land and in the water. This is why they bear the name “Retriever.”

Puppies, and even adult retrievers, love to please their masters. They are ready learners and intelligent enough to learn new tricks at almost any age.

Golden Retrievers are highly active dogs, and they require a lot of exercise. More than one walk a day is ideal for this breed. Since they’re great family dogs, if you have children, you shouldn’t have any trouble encouraging your Golden Retriever to play outside. Fetch, tug-of-war and chase are great games that kids can play with the dog to help keep him active. 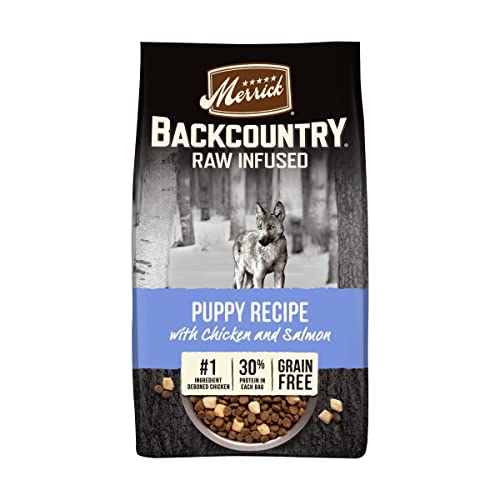 Feed your Golden Retriever a high-protein, quality kibble. Follow the instructions on the back of the dog food package to determine how much you should feed. The amount of kibble your dog needs will partially depend on the dog’s age, gender and size. If you are not sure how much you should feed ­your dog, consult your veterinarian.
­
Ideally, kibble should contain around 30% protein and less than 20% fat. Look for a dog food that contains a high percentage of meat rather than plant based protein, and avoid foods with large quantities of unhealthy carbohydrates like soy, corn and rice. Health fats, like Omega-3 and Omega-6 fatty acids, are good ingredients to look for.

Grooming For The Breed

Golden Retrievers are big shedders. They have long coats that will need to be brushed thoroughly at least once a week. If you don’t brush their coats, not only will you deal with dog hair all over your home, but your dog’s hair will likely become matted. Matted hair collects dirt, and may smell bad or be uncomfortable for your pet.

These dogs shed year-round, but you will find they shed more when they are “blowing out” their seasonal undercoats before growing new ones. You may need to brush them daily when they are shedding the undercoat.

More frequent baths may be necessary for this breed simply because they love to play outside, and they often get dirty while doing so. But be careful not to give too many baths, as it can lead to various skin conditions.

Regular ear checks, tooth brushing and nail clipping will be necessary too.

1. What are English Cream Golden Retrievers?

2. Is my Golden Retriever bred from European stock?

If you have a lighter colored Golden Retriever, you might be wondering if its ancestry lies more closely with dogs from European stock. All dogs of this breed are descended from the same Scottish bloodlines. But if you adopt a Golden Retriever in America or Canada, more than likely it was bred from dogs that were imported to North America in the early 1900’s.

3. Where can I get an English Cream puppy?

While you can find cream-colored Golden Retrievers for adoption or for sale, it’s harder to find them from reputable breeders. Most breeders want to produce dogs that meet the breed standard. This means that they will often disqualify paler dogs from their breeding stock. The thing to remember is that these dogs are not rare. The reason they’re harder to find is because trusted breeders do not want white or extremely pale dogs, because they do not classify as true to the breed. 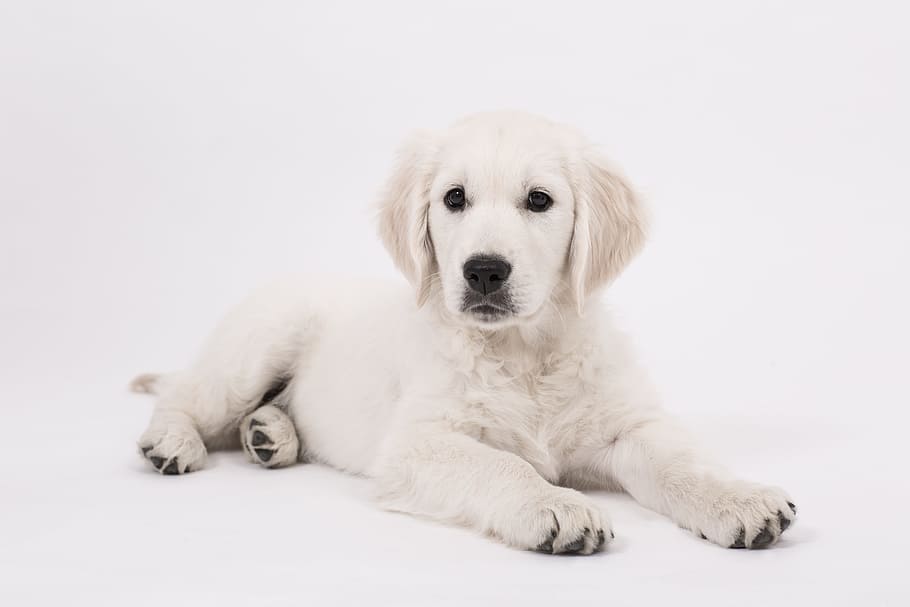 There is no real evidence to prove that paler coated retrievers are any healthier. Some statistics seem to indicate that the lighter colored dogs live slightly longer, and that the darker colored dogs may have a higher risk of certain health conditions. But in general, there is no way to prove that one color is healthier, and a buyer should distrust a breeder who suggests that the paler the dogs are healthier.

No. All Golden Retrievers shed a lot, and you should not trust a breeder who suggests that the paler colored coats are less prone to shedding.