The English Setter is the gentlest, mellowest, and fastest of the three setter dog breeds. The Irish, English and Gordon Setters have similar shapes but widely different coat types and colors. English Setters are elegant in appearance and elegant in their gait and movement. 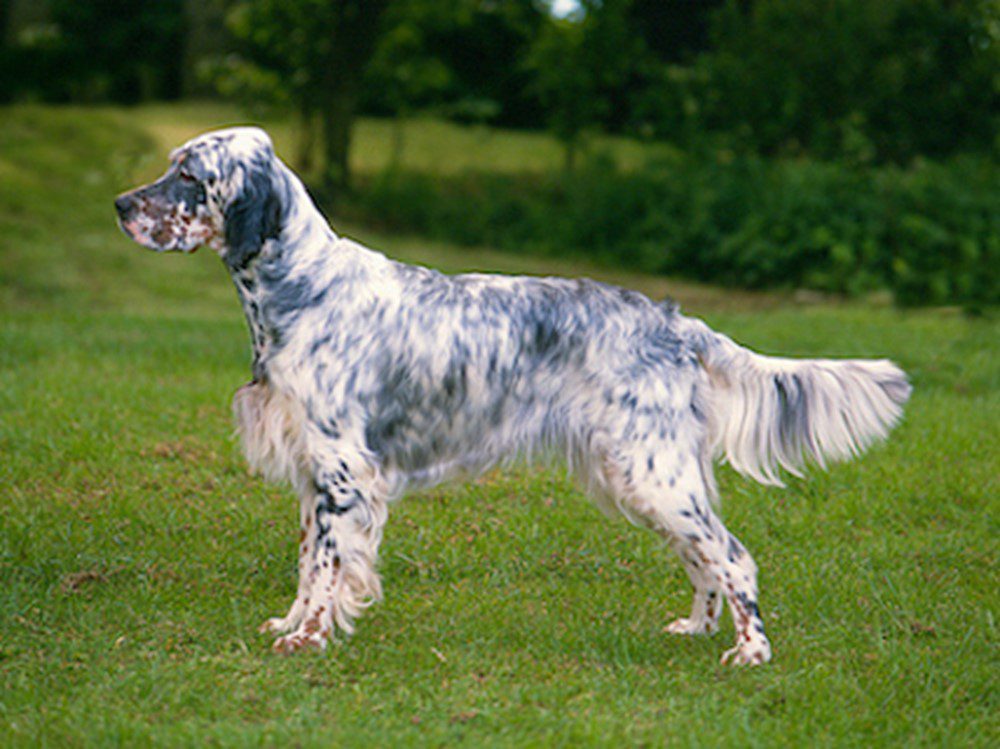 The English’s coat is medium to long, silky and slightly wavy with feathering on the ears, chest, legs and tails. This Setter’s coat can be white with patches of black, blue, tan or liver; or black and white; or tricolor (black, white and tan).

Male Setters stand 25 to 27 inches tall and females 24 to 25 inches tall at shoulder height. This breed can weigh from 45 to 70 pounds. The English belongs to the American Kennel Club (AKC) Sporting Dog Group.

History of The English Setter

English Setters were developed in 19th century England by Sir Edward Laverack and are therefore sometimes called the “Laverack Setter” A second breeder, a Welshman called Llewellyn, crossed some of Laverack’s Setters with his own for both hunting capabilities and attractiveness.

These Setters were used extensively as bird dogs and more recently as wonderful family dogs. The English is for some unknown reason the least popular of the three Setters and was ranked 95th out of 154 dog breeds in 2004 AKC registrations.

Temperament of a English Setter

This handsome and elegant Setter is a strong and active dog. The English is also a loving and loyal family dog that is kind and gentle with children. This breed gets along well with pets, other animals and strangers.

This sweet-natured sociable dog needs the companionship of its family – people and/or pets to be happy. Setters can be fairly easy to train but have a stubborn streak which takes the form of quiet resistance rather than outright disobedience.

Setter puppies can be energetic and need lots of exercise and should be supervised with toddlers. This breed needs early, consistent and patient obedience training. English Setters are not recommended for first-time or novice dog owners.

These Setters are not apartment dogs and need daily walks of several hours as well as activities to keep them busy. The English does much better in the country than in the city. This breed doesn’t do well in isolation as it needs the companionship of its family and other pets.

The English show-type needs a lot more grooming than the field or hunting type. Those Setters with a thicker coat will need a thorough brushing twice a week and regular trimming and clipping. This breed is a moderate shedder.

These Setters have a lifespan of approximately 12 years and are generally healthy. Occasional health problems include hip dysplasia and low thyroid.