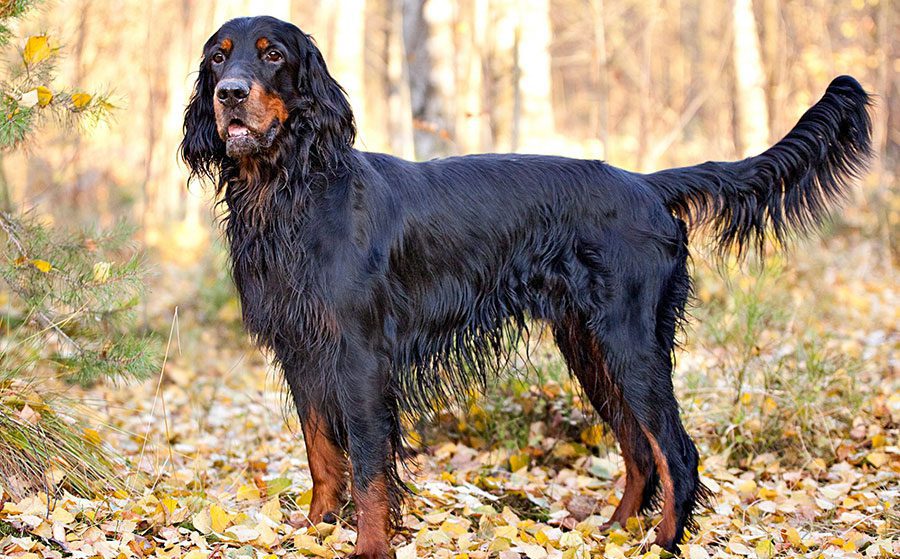 The Gordon Setter is the largest and strongest of the three setter dog breeds (English, Gordon and Irish) The three setters are similar in shape abut have somewhat different temperaments and widely different coat colors.

The handsome and muscular Gordon has a silky, medium-length coat with feathering on the ears, chest, stomach, tail and the backs of legs.

The color is black with tan or chestnut markings. Male Setters stand 25 to 27 inches tall and females 24 to 26 inches tall at shoulder height.

This breed can weigh from 45 to 80 pounds. The Gordon belongs to the American Kennel Club (AKC) Sporting Dog Group.

History of The Gordon Setter

Gordon Setters were developed in Scotland and were once known as the Black and Tan Setter of Scotland. The name of this dog breed comes from the Dukes of Gordon who developed this breed on their Scottish estates.

Today most Gordons are bred to be both field sports dogs as well as show dogs and family pets. The Gordon was ranked 87th out 154 dog breeds in 2004 AKC registrations.

Temperament of The Gordon Setter

The strong and handsome Gordon is the most serious and sensible of the three setters. The Gordon is a loveable, friendly and intelligent dog that is generally calm and dignified.

The Gordon is loyal to his family and makes a great companion both in the field and in the home. This Setter is a fairly large hunting dog and needs lots of exercise and room to run.

Gordons can be jealous of other pets and aggressive toward strange dogs. Therefore these Setters should be socialized early when puppies and given early obedience training.

The Gordon does fine with children if it was raised with them. Gordons, like all Setters, can be rather stubborn but firm and patient training will yield terrific results.

Gordons love to be with their immediate family but are somewhat suspicious of strangers. This breed makes a good watchdog. Gordon Setters are suitable for first-time or novice dog owners.

These Setters are not apartment dogs but can adapt to city living if they get several hours of daily walks and runs. After the Gordon is fully grown it loves to be taken hiking, jogging and biking as well as challenged with field work.

Gordon Setters need a brushing twice a week and regular trimming and clipping. The ears should be checked regularly for infections and excess hair on the inside of the ear should be trimmed to allow air circulation. Show-dogs will require significantly more grooming. This breed is a moderate shedder.