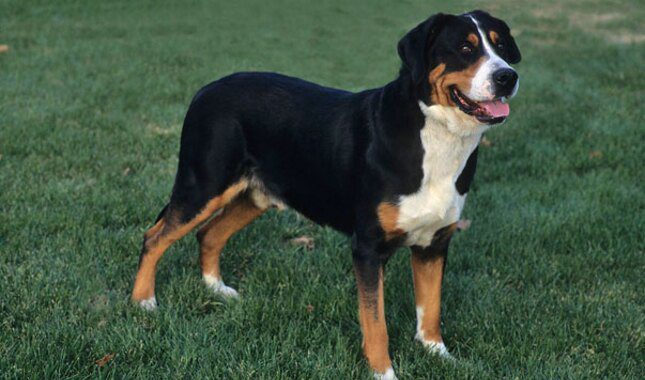 The Greater Swiss Mountain Dog or Swissy is a beautiful and somewhat imposing member of the giant dog breeds. Swissy males stand from 25 to 29 inches tall and females from 23 to 27 inches tall at shoulder height.

Swissies weight can range from 85 to 110 pounds for females and 105 to 140 pounds for males. Swissies have a short, straight and smooth outer coat with a thick undercoat.

Their coats are ebony black with tan or rust markings and white on their face, chest, paws and the tip of their tail. The breed’s ears and tail are natural.

Swiss Mountain Dogs are supposed to be direct descendants of Roman Mastiffs. Swissies were used by Swiss farmers to protect their cattle, guard their homes and haul packs and heavy carts to market. This breed was ranked 93rd out of 154 dog breeds in 2004 AKC registrations.

The Swissy is intelligent, hardworking, vigilant, reliable and protective. The Swissy is a great family dog that is good with children. This breed gets along well with other dogs and pets in the household.

Swissies can be overprotective to the family children if they think they are being threatened by their friends. The Swiss Mountain Dog has a very strong character and must be socialized and trained early by a handler who is kind but firm and always consistent. 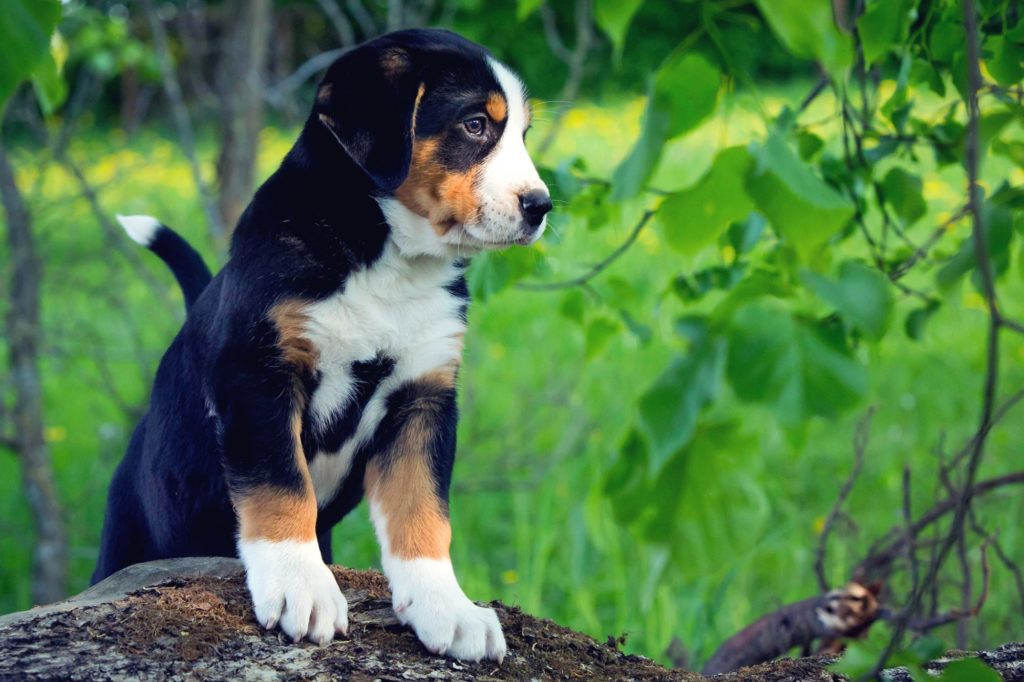 Swissies are intelligent and can be trained to a high level as a tracking dog or for competitive obedience. The Swissy is slow to mature and can be slow to house train as they don’t gain control over their bladders until 9 or 10 months of age.

Swiss Mountain Dogs need plenty of exercise but should not be exercised too vigorously while still growing. This giant dog needs lots of food while developing its muscles and bones.

The Greater Swiss requires lots of living space and will do best in the country or at least in a city house with a large yard.

The Greater Swiss requires minimal grooming beyond a weekly brushing to remove dead hair. The breed is a moderate shedder.

The Swissy is a large dog breed and only has an expected life span of 6 to 10 years. Common health problems include: hip dysplasia, entropion(eyelid disorder), bloat, seizures and digestive problems.

People who plan to acquire this breed should be committed to the challenges of socializing and training a strong-willed giant dog.