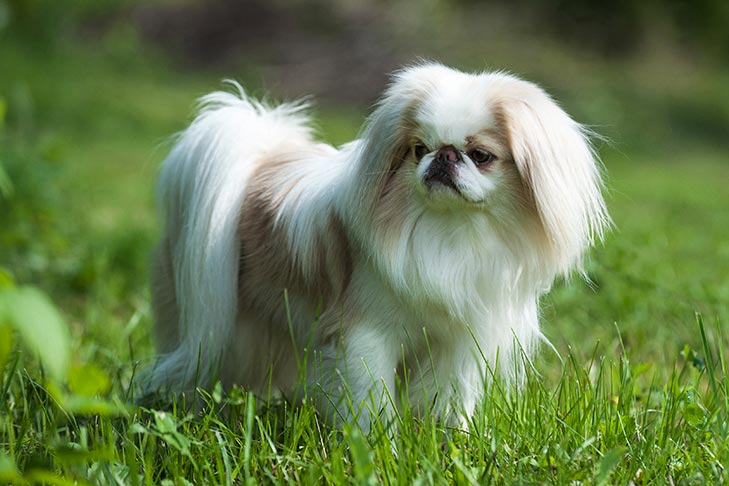 The Japanese Chin is sometimes called the Japanese Spaniel and is from the same family tree as the Tibetan Spaniel, the Pug and the Pekinese dog breeds. The lively and entertaining Chin is a toy-sized breed with a short and very wide muzzle.

The Chin’s large eyes are set quite wide apart and it almost has an Oriental appearance. Chins stand about 8 to 10 inches tall at shoulder height and weigh about 6 to 7 pounds.

These toy dogs have a long, thick and silky coat with straight hair. The Chin has extensive feathering on the legs, tail and body with a ruff around its neck. The Chin’s normal colors are black and white although red and white is also common.

History of The Japanese Chins Breed Japanese Chins actually originated in China and are probably descended from the Tibetan Spaniel. The breed was introduced to Japan over 2,500 years ago and became a favorite of the Japanese Imperial Court.

Temperament of The Japanese Chins Breed

Japanese Chins are lively, intelligent, playful and affectionate toy dogs. The Chin makes a great apartment dog that is an entertaining companion and easy to manage. The Chin likes to entertain and show off its tricks and makes a good show dog.

This toy breed is a terrific companion for seniors but gets along well with older children and small pets. The Chin needs early socialization while a puppy to avoid becoming timid or shy. The Chin is intelligent and eager to please and is fairly easy to obedience train.

Chins, like all toy dog breeds, are difficult to house train. Chins like to be petted, cuddled and spoiled. Chins can be left alone during the day as long as they get lots of attention before and after work. This breed is suitable for novice or first-time dog owners.

Japanese Chins get sufficient exercise playing in the apartment or house but love to play in a fenced yard. The Chin doesn’t like hot and humid conditions. This breed makes a great apartment dog.

The Chin has a beautiful coat that doesn’t get tangled too easily. The long silky coat should be brushed and combed about twice per week and daily when shedding. It will be necessary to wash the Chin’s white coat from time-to-time to keep it looking attractive.