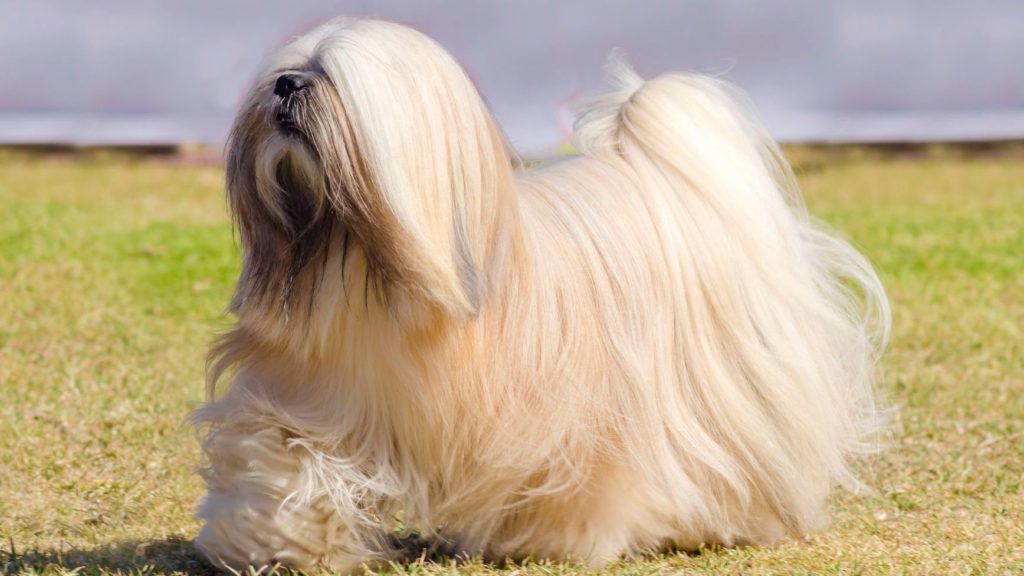 The Lhasa Apso is a small dog with a lot of personality. The Lhasa is a hardy small dog breed that is known as the Tibetan Apso in the UK and also as the Lion Dog of Tibet.

This Tibetan breed has a very long outer coat, which is coarse and straight, and a softer thick undercoat. Coat colors range from a beautiful honey-brown to white, brown and even slate. The Lhasa’s ears, tail, legs and feet are heavily feathered and the face sports long whiskers and a beard.

The eyes are difficult to see as they are covered by hair. The Lhasa stands approximately 10 to 11 inches tall at shoulder height and weighs 13 to 19 pounds. Lhasa Apsos are members of the American Kennel Club (AKC) Non-Sporting Dog Group.

History of The Lhasa Apso

The Tibetan Apso dates back at least two thousand years when it was bred in Tibet by holy men and nobles to guard palaces, monasteries, and temples in the holy city of Lhasa.

Lhasa Apsos were impossible to buy, but the Dalai Lama used to present them to visiting dignitaries. In his native Tibet, the breed is called the “Bark Lion Sentinel Dog”. The Lhasa first came to the U.S. in the 1930’s and has become quite popular.

This Tibetan breed was ranked 39th out of 154 dog breeds in 2004 AKC registrations.

Temperament of The Lhasa Apso

The Tibetan Apso looks like a lap dog but behaves like the Lion Dog of Tibet. Lhasas are one of the toughest and strongest willed of all the small dog breeds. The Lhasa is an intelligent, very self-confident, and lively dog that dislikes strangers.

This Tibetan breed is regal and dignified, but can also be lively and playful. The Lhasa can be jealous of other animals. The Lhasa doesn’t do well around small children because it doesn’t like being handled roughly.

The Tibetan Lhasa must have lots of early obedience training and socialization while a puppy, and this must be continued through adolescence. You must take control of this dog or the Lhasa will rule your household like the emperor he thinks he is.

Not to be too negative, Lhasas are really enjoyable and playful dogs who love their families and will accept obedience training fairly readily. Lhasa Apsos do best with experienced dog owners who can train this breed as required.

Lhasas get lots of exercise by playing in the house or apartment. They are devoted to their owners and love to go anywhere with them – on a walk or in the car.

The Lhasa’s coat must be thoroughly brushed and combed several times per week. Make sure to brush and comb the thick undercoat as well, otherwise it will become matted and tangled. Be careful not to pull too hard while combing or the hair will break.

Clip any excess hair between the pads of the feet and keep the ears clean. Lhasa Apsos that are not being shown can sport a shorter clip that will allow you to see your dog’s eyes and spend less time on tangles.

Lhasas should live for 12 to 15 years and common health problems include: hip dysplasia, diabetes, heart murmurs and skin allergies.