The Mastiff or Old English Mastiff is a gentle giant dog and one of the heaviest dog breeds. This giant breed has a massive head with a short, wide muzzle and a broad, deep chest and powerful body. 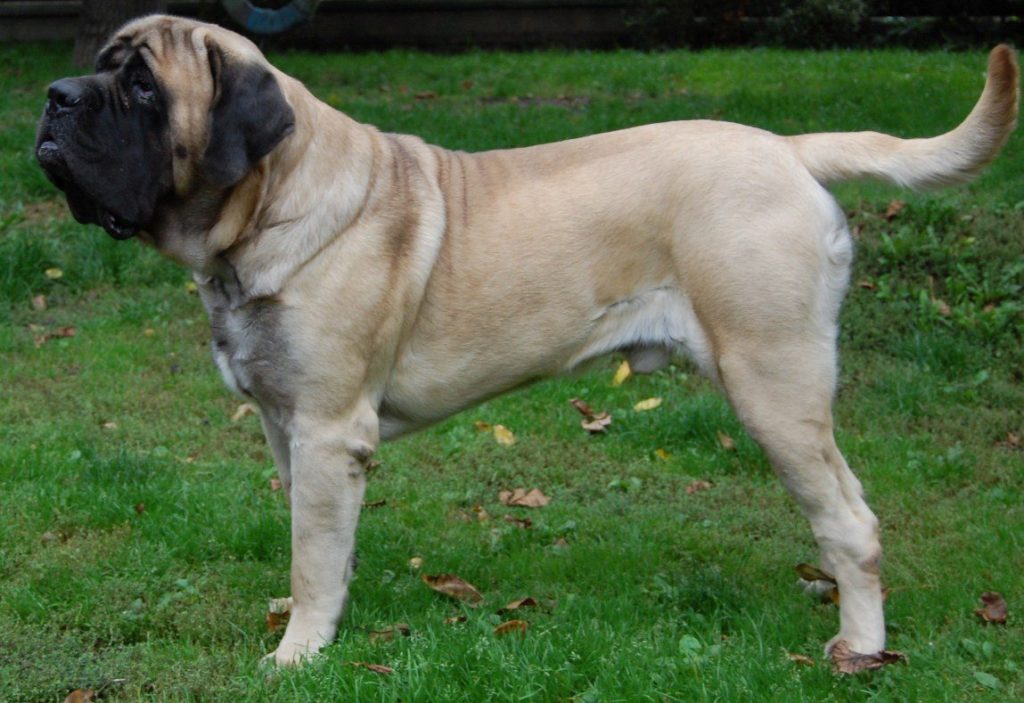 The short coat is fawn, apricot, silver, or brindle with a black facial mask and darker ears. This giant breed is a member of the American Kennel Club (AKC) Working Dog Group.

History of The Mastiff

The Old English Mastiff may have been introduced into Britain by Phoenician traders but it certainly was used as a war dog by Roman legions. Mastiffs were used as dogs of war until the late Middle Ages and then used to hunt bears and wolves and for the ‘sport’ of bear-baiting.

After bear-baiting was banned in the 19th century, the breed’s popularity declined in England but remained popular in the U.S. as guard and companion dogs. This giant breed was ranked 33rd out of 154 dog breeds in 2004 AKC registrations.

Temperament of The Mastiff

This gentle giant of a dog is a great family dog that is calm, dignified, good-natured, gentle, loyal, and very fond of children. Because of its giant size, toddlers are in danger of being knocked down and should always be supervised carefully.

Mastiffs need a house with a large fenced yard. Some fully grown mastiffs can adapt to apartment living if given regular exercise. This breed needs lots of companionship and should have early and on-going socialization and obedience training.

This intelligent and good-natured dog responds well to early obedience training and you must be able to control this giant breed with voice commends. Mastiffs tend to drool and slobber a lot and will wheeze and snore loudly.

This breed is naturally protective of its home and family and must be socialised early and often with other dogs to prevent it from becoming combative. Mastiffs make good watch dogs and guard dogs. They should have an experienced owner who knows how to manage them.

Young dogs should not be exercised too strenuously while they are still growing. Fully-grown Mastiffs need regular exercise, including walks and runs, as they have a tendency to be lazy and gain weight. These dogs are not jogging companions but do enjoy walks on leash. Mastiffs always need a soft place to lie down because they are so heavy.

Mastiffs require minimal grooming except when shedding, and then brushing with a rubber brush will remove loose hairs.

This giant breed can be expected to live for only 6 to 10 years. These dogs are prone to hip dysplasia, heart defects, cancer, kidney disease, and eyelid (entropion) disorders. Mastiffs should be fed 2 or 3 smaller meals per day as they are prone to bloating. They are subject to heat stroke in hot and humid weather.