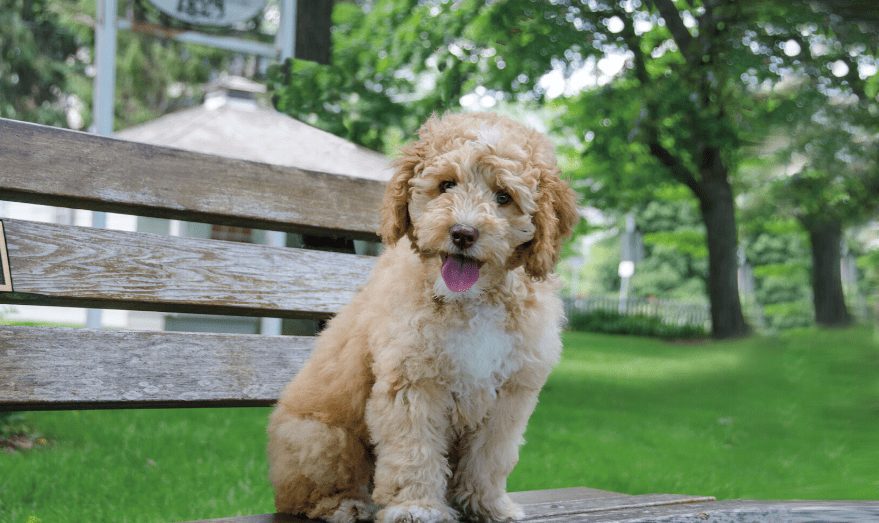 Under 45 lbs in weight, these real-life teddy bear dogs are an excellent addition to any home, especially if you don’t have the space for a Standard Labradoodle. If you’re interested in learning more about these pups, read on below to find out all the facts!

History Of The Mini Labradoodle

The Labradoodle is known for being an excellent service dog, often being used as a therapy dog or service dog due to their sweet and affectionate nature. The Mini Labradoodle, also known as the Toy Labradoodle, was originally bred to be the companion counterpart to the Standard Labradoodle — a smaller version that people could live happily alongside. They were also bred because of their hypoallergenic coat that they could inherit from their Poodle parent, although this is also one of the reasons the Standard Labradoodle was bred! We will go into more detail about their hypoallergenic coat later on.

As the Mini Labradoodle is not a purebred, it is not recognized by the American Kennel Club (AKC). However, it is registered with the Designer Breed Registry. A Mini Labradoodle puppy can cost you anywhere between $1,500 to $5,000 but, unfortunately, their heavy price tag means they are popular at puppy mills. Always find a reputable breeder when you are buying one of these pups (or any dog!).

We can take a look at the parent breeds origins first to understand the beginnings of the Labradoodle.

The Poodle originated from the French and German border in the 15th and 16th century and was associated with the upper class. Because they are excellent water dogs, they were used to hunt water-fowl.

Later on, because of their adorable look, these pups became a very popular dog. The Toy Poodle was bred from the Standard Poodle by choosing the smallest pup from each litter and breeding with them. They were first seen in America in the 20th century.

The Labrador is the most popular breed of dog in America. Labradors were originally bred as gun dogs in the 1800s and used to accompany hunters and retrieve animals that had been shot. They were also used in Newfoundland to retrieve fish that came in off the trawl, which is why they love the water. Their loyal and loving nature mean that they quickly became a very popular family dog and are still used today as working dogs, such as guide dogs. 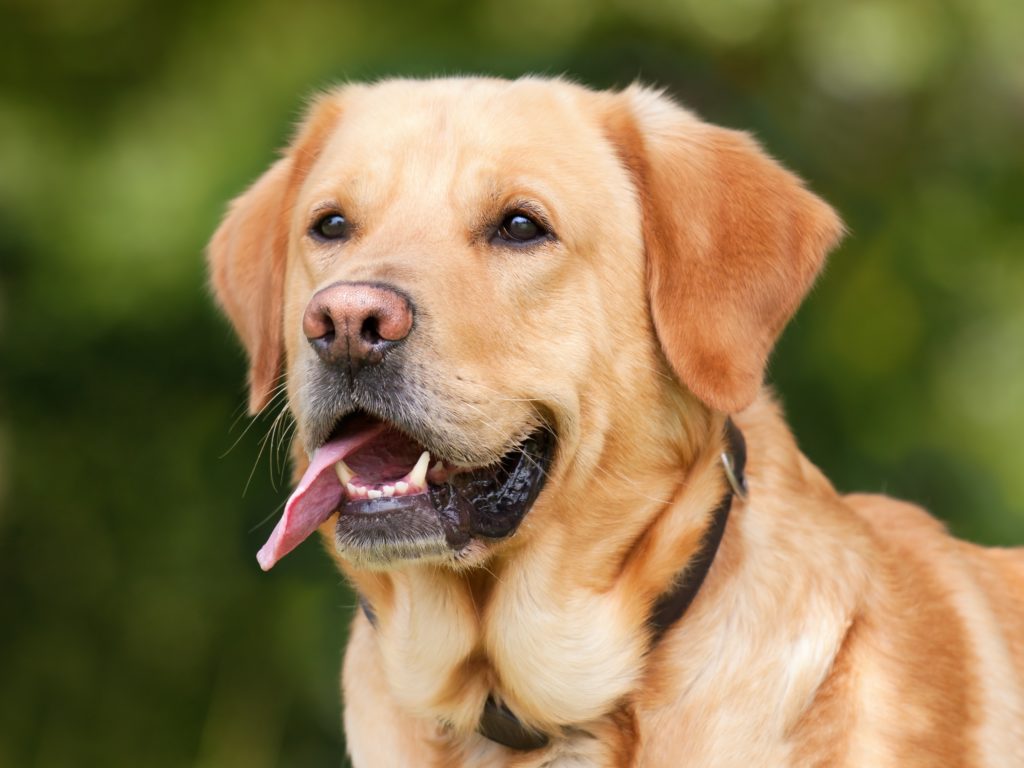 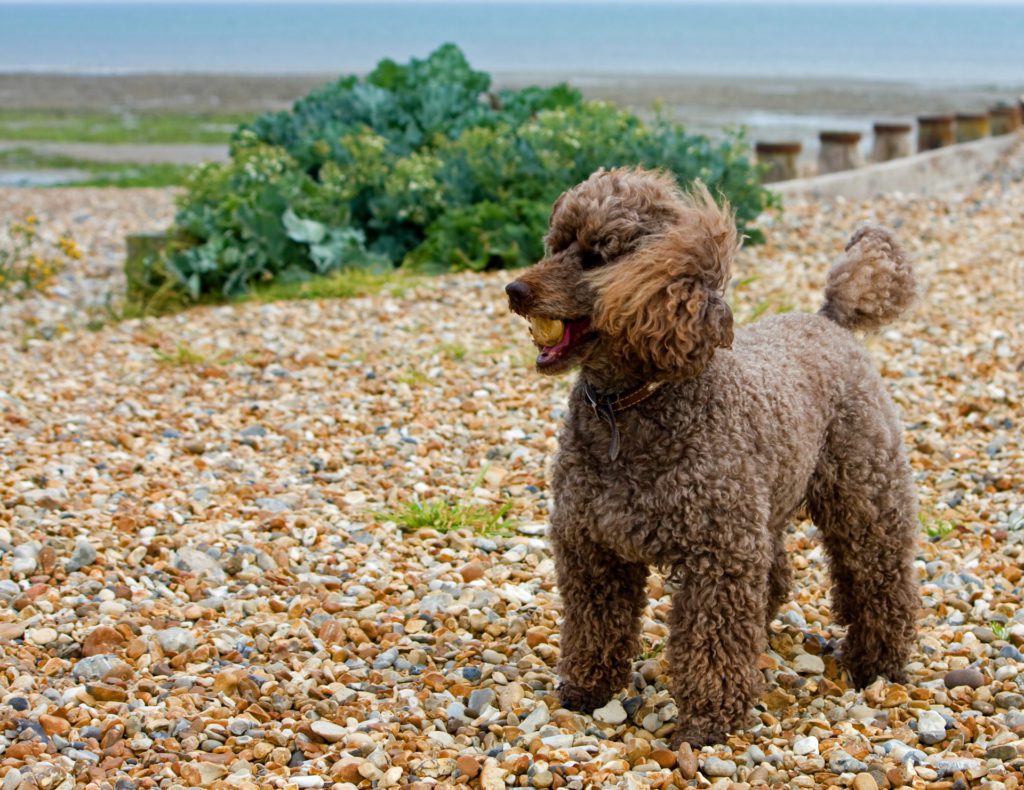 Characteristics Of The Mini Labradoodle

Because the Mini labradoodle is a crossbreed, it can be difficult to determine the exact characteristics that they are going to inherit from each parent. One litter may take more traits from the Poodle parent, while another litter may take more traits from the Labrador parent. We can, however, say that the characteristics of the Mini Labradoodle are the same as the Standard Labradoodle — they really are the same dog, just in a smaller size!

As we mentioned above, there are different generations of these pups and, depending on the generation you buy, the more or less likely you may be able to determine your dog’s characteristics. A F2 Mini Labradoodle has a more predictable temperament and appearance.

However, based on past Mini Labradoodle litters, we can predict some of the traits of these pups no matter the generation.

The Toy Labradoodle looks almost identical to their Standard cousins, except they are much smaller. These little pups normally stand between 14 to 16 inches tall and usually weigh under 45 lbs, with the average weight being anywhere between 15 to 25 lbs. Much like the Standard Labradoodle, the Mini looks a bit like a teddy bear!

These dogs can inherit different coat types from their parents. Some Mini Labradoodles may inherit a long, curly and thick coat from their Poodle parent, or they inherit a short, straight and dense coat from their Labrador parent. This is very difficult to predict and sometimes the coat will even be a perfect hybrid of both parents!

That being said, if your pup inherits their coat from their Poodle parent, it is likely they will be hypoallergenic and great for those with allergies. However, this isn’t a definite trait of the Labradoodle anymore so if you are worried, spend some time with your Labradoodle puppy before buying to see whether they affect your allergies.

The color of your Mini Doodle’s coat is another factor that is difficult to predict. Normally, the Labradoodle will have a solid colored coat, but this is not always true. The most common coat colors for this breed are black, brown, chocolate, apricot, cream, golden, silver and white.

The Labradoodle is a smart, loving and playful dog that inherits desirable traits from both parent breeds. Bred to be companion dogs, these pups certainly live up to it and love to be around people. They love to please their owners too, which makes them easy to train and fun to learn tricks with!

Their intelligence means that they make excellent service dogs, especially guide dogs and therapy dogs, and they are highly intuitive, too. Their friendly nature means they will want to spend time with you and they are extremely sociable. They will love a trip to the store or a walk in the park where they can socialize with other people and dogs.

A great family pet, the Labradoodle gets on with everyone and just wants to love you! Their playful and active nature means they love to spend time outside too, having fun and burning off energy. If you need a dog to brighten up your day, the Labradoodle might be for you.

Mixed breed dogs normally have a longer life expectancy that purebred breeds. Miniature Poodle’s have a life expectancy of 10 to 18 years while the Labrador Retriever has a lifespan of roughly 10 to 12 years. You can expect your Miniature Labradoodle to fall into this range.

Unfortunately, the Mini Labradoodle is susceptible to some health problems that their parent breeds are prone to. We have laid out the most common health concerns seen in the Labradoodle below.

Regular vet checkups and keeping an eye on your dog will ensure you can catch any of these issues before they become untreatable.

Remember — buy from a reputable breeder and the chances your dog will suffer any health conditions will be greatly reduced. Trusted breeders will do health checks on both parent breeds and will not crossbreed if there is a chance of passing on any issues to offspring. 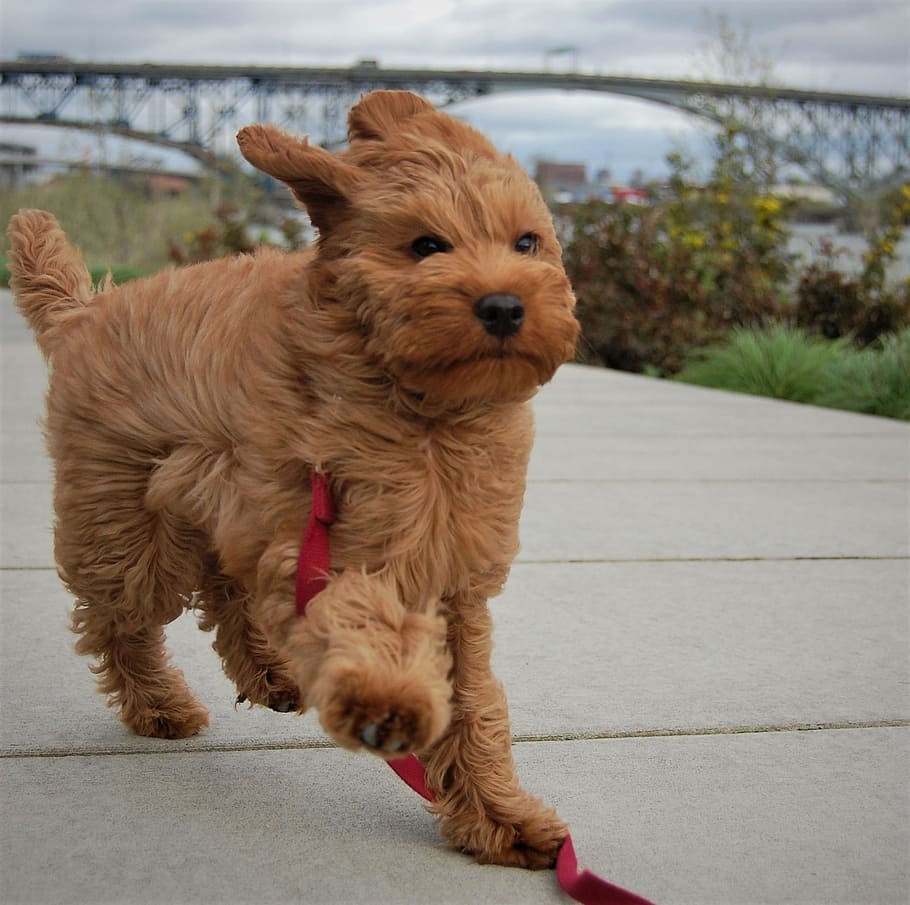 Now we know the characteristics and traits of a Mini Labradoodle, it is time to take a look at what looking after and living with one of these pets is like. Read on below to find out about their food and diet, their exercise needs and their grooming needs.

Although a small dog, this Poodle Mix requires around 1.5 to 2 cups of food every day. You should always check the back of the dog food packet to see how much of a particular food you should feeding them based on their weight. The food you feed your Labradoodle should be high-quality and nutritious. Try to find a food that is formulated specifically for their size.

The Labradoodle can be known to overeat and gain weight, so don’t let them free-feed. Try to space their meals over at least two meals a day. This will also help with the bloat that this breed is more prone to and can be a life threatening issue. 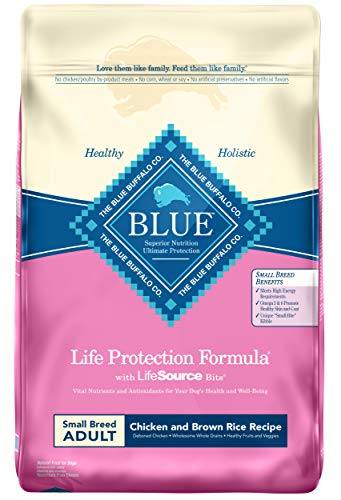 We recommend the Blue Buffalo Life Protection Formula for the Mini Labradoodle. This food is specially formulated for small dog breeds and ensures that a pup of this size gets all the nutrients they need to stay healthy. With high-quality protein from chicken, this kibble helps to maintain your Labradoodle’s lean muscles and there are wholesome whole grains, garden veggies and fruit in the recipe too.

Even better, this Life Protection Formula contains a blend of antioxidants, vitamins and minerals that supports immune system health, life stage requirements and a healthy oxidative balance. There are also no artificial colors or flavors in the recipe.

Miniature Labradoodles are very active dogs and have high exercise needs. You should be ready to spend anywhere between 30 and 60 minutes exercising these dogs, which can be a combination of walking, running, playing games or even swimming!

Their intelligence means they do very well with brain games and need a lot of mental stimulation. Try playing “fetch” with them while you’re out at the park and mix up the different types of exercise you do with them to keep them entertained. Keeping them well exercised will prevent them from getting into mischief!

We have mentioned above that the Labradoodle makes an excellent family dog. Due to their smaller size, the Mini Labradoodle is slightly more manageable than it’s Standard cousin and means that it can thrive in smaller homes such as an apartment.

However, due to their high energy levels, they do need space to run around, so a back yard is often preferable. They will especially love to play with you so you will have to make sure you have time to put aside to spend with your Labradoodle before you buy. They have a love for adventure, too, and will happily accompany you on walks, hikes, runs or even just trips to the store!

A loving and friendly dog, the Mini Labradoodle is excellent around children. Due to their smaller size they actually get on a lot better with children that the Standard Labradoodle because they are less boisterous! They will particularly love becoming your children’s best friend and playmate.

The intelligence of the Labradoodle makes them a dream to train. They just want to please you, which is what makes it so easy! This also means that they make excellent first pets and you do not need a lot of experience to own one of these dogs — just a lot of love! 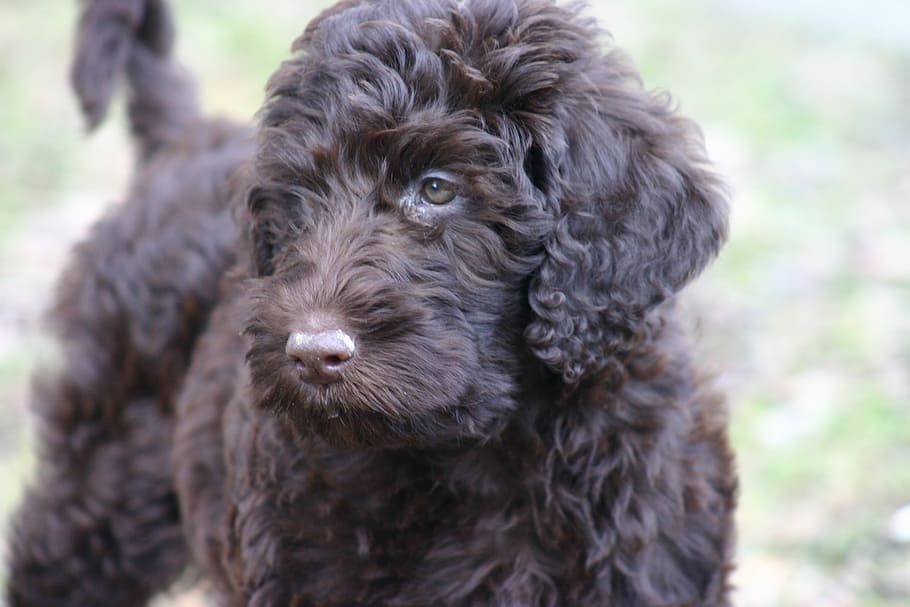 The Labradoodle is a highly intelligent dog and is therefore very easy to train. They love to please their owners, so training should not be an issue even if you have never trained a dog before.

Training should begin from a young age, between 8 to 10 weeks old. You can take them to puppy class or an obedience class to learn if you are unsure of how to train a dog.

Like all dogs, the Labradoodle will respond well to positive reinforcement training. This includes reward based training such as verbal praise or treats. You should never get angry at your Labradoodle while training because they will not understand and will not want to learn.

Socialization is something else that should begin from a young age, as soon as you bring your dog home. You should introduce your Labradoodle to new sounds, sights, places, smells, people and animals so they learn that there is no danger and nothing to be scared of.

Fortunately, Labradoodles are social dogs by nature, so this should not be too difficult.

Regular trips to the groomers can ensure they stay in good condition. The groomer can also cut their nails as needed. Remember to brush their teeth regularly to prevent gum disease and tooth decay. You can buy dental sticks to help with this too.

The Mini Labradoodle is an adorable teddy-bear breed that fits into any family. Loving and friendly, this Poodle Labrador mix is known for being intelligent and easy to live with, learning obedience training easily and making a great first pet. Also used as a guide dog and therapy dog, there is no wonder that this affectionate and intuitive dog is one of the most popular hybrid breeds out there today. What do you think, is a Mini Labradoodle for you?