You are here: Home / Dog Breeds / The Pocket Beagle – Your Complete Guide 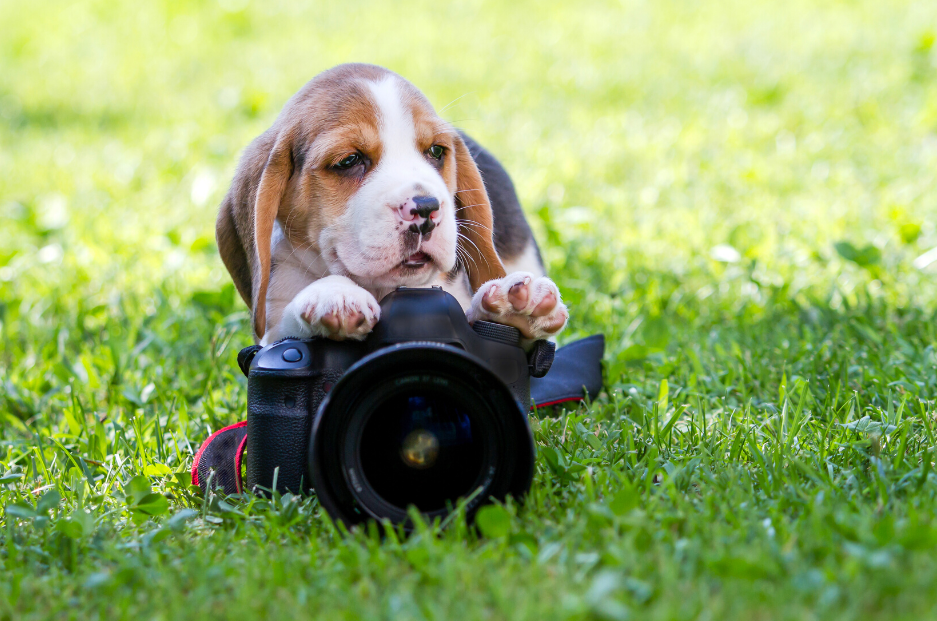 The Beagle is one of the most popular dogs and ranks at number six in the United States today. You may already know that these dogs are curious, intelligent and fantastic scent hounds, but did you know there is a small version of this pup?

That’s right — the Pocket Beagle. These loving dogs have many of the same characteristics and traits as a standard Beagle, but measure in at two to three inches smaller than their siblings. Discovered in the 15th century and popular with Queen Elizabeth, the Pocket Beagle is a great pet for those who want the companionship of a Beagle but don’t have the space at home.

Read on below to find out more about this interesting dog and where they came from.

History Of The Pocket Beagle

Two to three inches smaller than a standard Beagle, these dogs are also recognized by the National Beagle Club of America as a smaller Beagle.

Originally, in medieval times, the name “Beagle” didn’t refer to a specific breed of dog and instead referred to any small hound. The Beagle as we know it today was bred around the 11th century when William the Conquer brought the Talbot (a now extinct breed) to England. The Talbot Hound was then bred with Greyhounds, known as Southern Hounds, to produce the modern day Beagle.

The Pocket Beagle breed was first recorded in England in the 15th century when Elizabeth I owned many. They were small enough to sit in her pocket and accompany her during hunts. They were also often nicknamed the Queen Elizabeth Pocket Beagle, which is where their breed name came from. 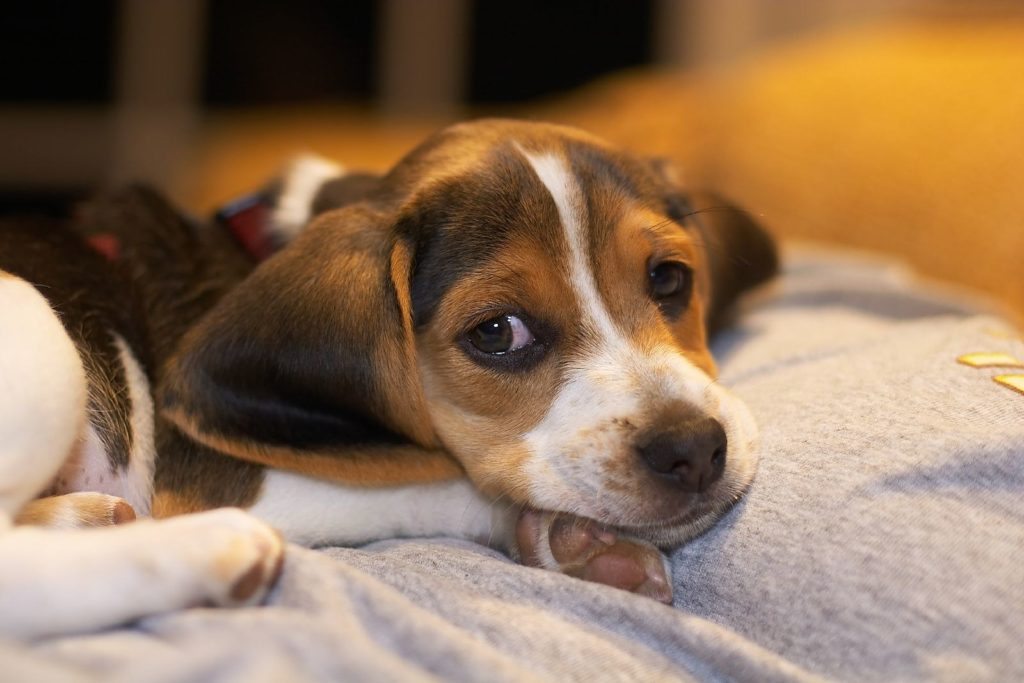 Characteristics Of The Pocket Beagle

Because the Pocket Beagle is known as a designer dog, they can be quite expensive. When buying from a breeder, you can expect to pay anywhere between $500 and $1,500 per puppy. The litter size can vary greatly and a mother can produce between two and fourteen pups, with an average of seven.

Read on below to find out more about the characteristics and traits of the Pocket Beagle.

The Pocket Beagle is very similar to their standard size siblings when it comes to appearance. They are a muscular yet lean dog and have a deep chest, long tail and defined features, as well as floppy ears.

The Pocket Beagle coat is soft to the touch, yet dense. It is a thick double coat. Fortunately, they do not require a lot of grooming, although we will go into more detail about that later on.

The most common coat color for a Beagle is white, black and tan. However, Beagles can come in many other colors including brown, red, bluetick, lemon, tricolor and pied. You may also occasionally see albino Pocket Beagles, but they are extremely rare!

The Pocket Beagle has a very similar temperament to the standard Beagle. These dogs are intelligent, friendly, loyal and curious. They love to be around people and love to be the center of attention, which means they don’t like to be left alone. If they are left alone for a long time, they can become destructive and start exhibiting unwanted behaviors. However, they can be left alone for short periods of time if they are given something to entertain themselves with while you are gone.

Although they are very loyal dogs, these dogs can be quite independent. They are also known to bark when they are bored, as well as exhibiting howling and baying. Training them properly and socializing them from a young age will get rid of any unwanted behavior and ensure they don’t develop any bad habits.

The Pocket Beagle is also a very active dog with a lot of energy. They need a lot of stimulation to keep themselves happy. As a scent hound, they also love following smells and have been known to wander off because they can’t resist a certain scent!

The Pocket Beagle has a long life expectancy and normally lives on average between 12 and 15 years.

The Pocket Beagle is a very healthy dog breed and does not suffer from many inherited health problems. Of course, as with all dogs, health issues can arise, but luckily this is minimal in this breed.

The biggest health concern for this dog is Intervertebral Disc Disease. This is the degeneration of the spinal cord which can result in pain when moving, although it can be fixed with surgery.

Beagles can also suffer with congenital heart defects. This includes heart failure and Pulmonic Stenosis. Herat failure normally happens close to or just after birth and is the most common heart defect in Beagles. It is however diagnosed quickly and can be treated with surgery. Pulmonic Stenosis is a narrowing of the connection between the right heart chamber. This is a condition that is likely to affect smaller breeds, hence why it often arises in the Pocket Beagle.

To ensure your dog is less likely to develop any health issues in life, always make sure that you buy from a reputable breeder. Visit the breeder before you buy to double check the parent dogs are healthy and they are looking after the Beagle puppies properly. 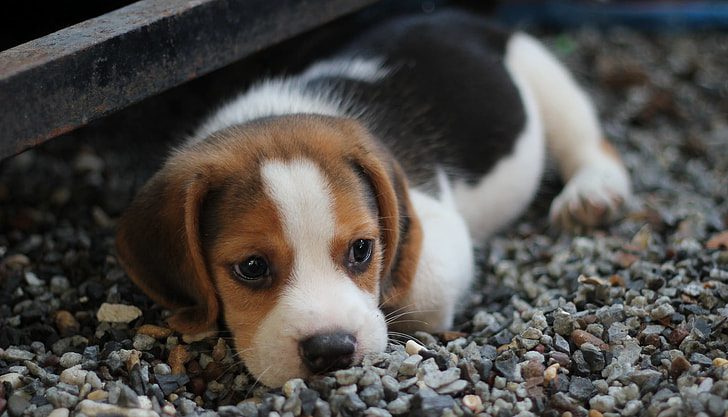 Now we have learnt all about the characteristics and temperament of the Pocket Beagle, it is time to look at daily life with one of these dogs and what it is like to live with one.

Like many hounds, the small Beagle would overeat if given the chance. They love food and will scavenge for anything, so if you live in a family you’ll have to make sure small children don’t give them scraps of food when you’re not looking!

The Pocket Beagle should be eating around 1 cup of high quality kibble a day. Of course, this is going to depend on the size and weight of your dog and you should always check the back of the dog food packet to ensure the correct of food that you’re feeding them. This one cup of food should be split into two or three meals throughout the day and they shouldn’t be given too many snacks or treats.

Obesity in dogs can lead to canine diabetes. If you think your dog is eating too quickly, you can always purchase a “fun-feeder or slow-down bowl” for them to eat out of!

Pocket Beagles do not require quite as much exercise as a standard Beagle, but don’t let this make you think they’re a lazy dog. They love to be outside playing and will often have their nose to the ground like a true scent hound.

You should try to walk your dog for at least 30 minutes a day. Taking them to new places will be an exciting experience for them because there will be lots of new scents to smell! It is important you keep them on a lead, however, because when they are nose to the ground they often have no awareness of others around them and could run into traffic. They are also known to run off when following a scent!

The Pocket Beagle will also love to exercise and play with you in the garden. You should always make sure that there is an area where you live where they can be taken off the lead and be able to run around freely.

The Pocket Beagle makes an excellent family dog. Their playfulness and friendless means they get on with all humans and they make an excellent playmate for children. Because they love people, they will want to spend their day by your side. Be careful though, because the Pocket Beagle doesn’t like to be left alone for long periods of time. Although they can be left for a little while if given something to play with, this isn’t the dog for a busy family who can’t spend time with their pup.

While the Pocket Beagle is certainly an active dog that loves to play, they may be better suited to some families than a Standard Beagle because they don’t have quite as much energy. Still able to accompany you on walks and hikes, this pup loves exercise, but you will not have to worry about being outside with them all the time!

This small dog also doesn’t have high maintenance needs and are very easy to train. This means they are the perfect pet for those who have never trained a dog before. The Pocket Beagle is also the perfect family pet for those who live in an apartment, because of their small size. However, you should always make sure they have somewhere to run around, such as a garden.

Beagles are very intelligent dogs who love to learn, so training them is not an issue. They are extremely loyal dogs, so punishment is never advised. You should always use positive training reinforcement such as verbal praise and treats so training is an enjoyable experience for them. Punishment can create feelings of disloyalty and distrust in your Beagle.

Socializing your Beagle from an early age is also important. This will ensure they don’t develop any unwanted or destructive behaviors as they grow up. Beagles are known to chase other family pets, so this is very important if you have dogs or cats in the house. You should try to show them as many sights, places, animals and smells so they develop into a well-rounded pup.

The Pocket Beagle does not have very many grooming needs and is very easy to maintain. You should brush them weekly to remove dead hair and dirt and to promote growth also. You can use a rubber grooming glove or bristle brush to comb through their thick double coat.

Luckily, Beagles do not need to be washed regularly and, unless they have rolled in something foul smelling, you shouldn’t bathe them. You should trim their nails from time to time and try to brush their teeth as often as you can. The more you brush their teeth, the less likely they are to develop decay or dental disease. 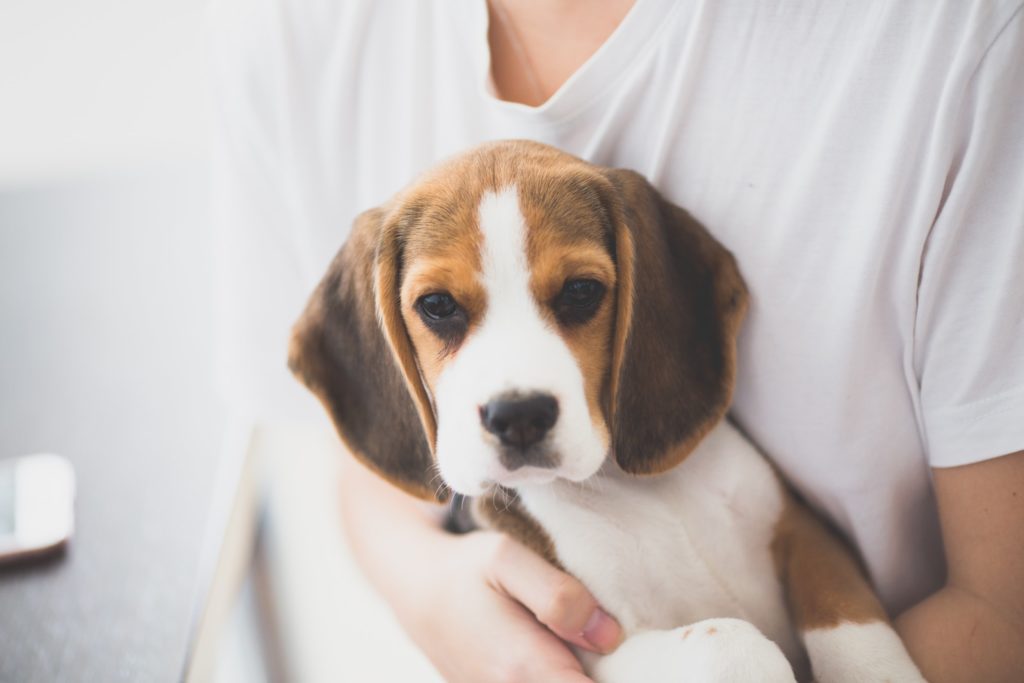 What is the difference between a Beagle and a Pocket Beagle?

A standard Beagle will also be slightly more active than a Pocket Beagle. However, these two variations of the dog have many of the same tendencies, temperament and traits, so their size is the biggest difference!

How much does a Pocket Beagle cost?

A Pocket Beagle puppy is known as a designer dog and you can expect to pay anywhere between $500 and $1,500 per puppy from a breeder. If this is out of your price range, then you can always check your local shelter to see if they have any Beagles who need a home.

If you have always wanted a Beagle but didn’t have the space or couldn’t quite keep up with their energy needs, then a Pocket Beagle might be the dog for you. Measuring 25% smaller than a standard Beagle, the Pocket Beagle carries all the same characteristics, including their intelligence, loyalty and wonderful playfulness. The perfect family dog, this friendly pup will love to spend their days with you and playing games outside and running around. Easy to train and without high grooming needs, the Beagle is one of America’s most popular dogs. Are they the right pup for you?