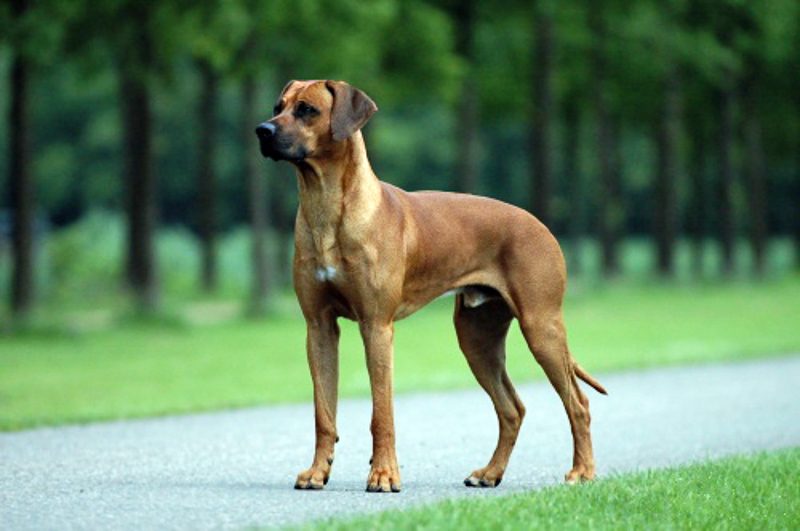 The Rhodesian Ridgeback, also known as the African Lion Dog or Rhodesian Lion Dog, is a lean, well muscled and magnificent, large dog breed. The Rodesian Ridgeback gets its name from a characteristic ridge running down the dog’s back, where the stiff hair grows in the opposite direction from the rest of the coat.

The ridge starts immediately behind the shoulders, where there are two whorls directly opposite each other, and continues along the dogs back to a point between the hips.

The Ridgeback has an extremely strong body with a deep and well-ribbed chest; a large head with high-set droop ears that taper to a rounded point; round wide-set dark brown or amber eyes; and a long and strong tapered tail.

The Ridgeback’s coat is short, hard, dense, sleek and glossy. Coat colors range from light wheaten to red wheaten. Male Ridgebacks stand 25 to 27 inches and females 24 to 26 inches tall at shoulder height. Males weigh from 70 to 85 pounds and females from 60 to 75 pounds.

History of The Rhodesian Ridgeback

The Ridgeback is indigenous to South Africa. The only dog known to have a ridge growing in the opposite direction was the Phu Quoc, from an Asian island, which may have been brought to Africa by Phoenician traders.

This ridge is characteristic of the half wild African Hottentot Hunting dog and it is assumed that these dogs were crossed with other hunting dogs brought to South Africa by immigrants. Any number of breeds, such as the Mastiff, Great Dane, and Bloodhound, could have been involved in the Ridgeback’s development.

The Ridgeback developed into a very intelligent hound of great strength and courage that could go without water for extended periods of time and could cope with the extreme temperatures of the African landscape.

Ridgebacks became outstanding hunting dogs that were used in packs to hunt antelope, buffalo, leopards and lions. The breed was taken to Rhodesia (now Zimbabwe) in 1870 and had great success as a hunting dog and became known as the Rhodesian Lion Dog.

The breed was imported to England in 1930 and the U.S. in 1950 and was registered by the AKC in 1955. Today the Rhodesian Ridgeback is a popular family dog and was ranked 54th out of 154 dog breeds in 2005 AKC registrations.

The Ridgeback is dignified, trustworthy, loyal, intelligent and makes a great family pet. It is extremely protective of its immediate family and has a streak of independence – probably left over from its hunting background.

Ridgebacks are very good with children, especially when raised with them. However young Ridgebacks can be too rambunctious for small children and toddlers. Ridgebacks are wary of strangers and also other animals and must be thoroughly socialized and obedience trained while a puppy. 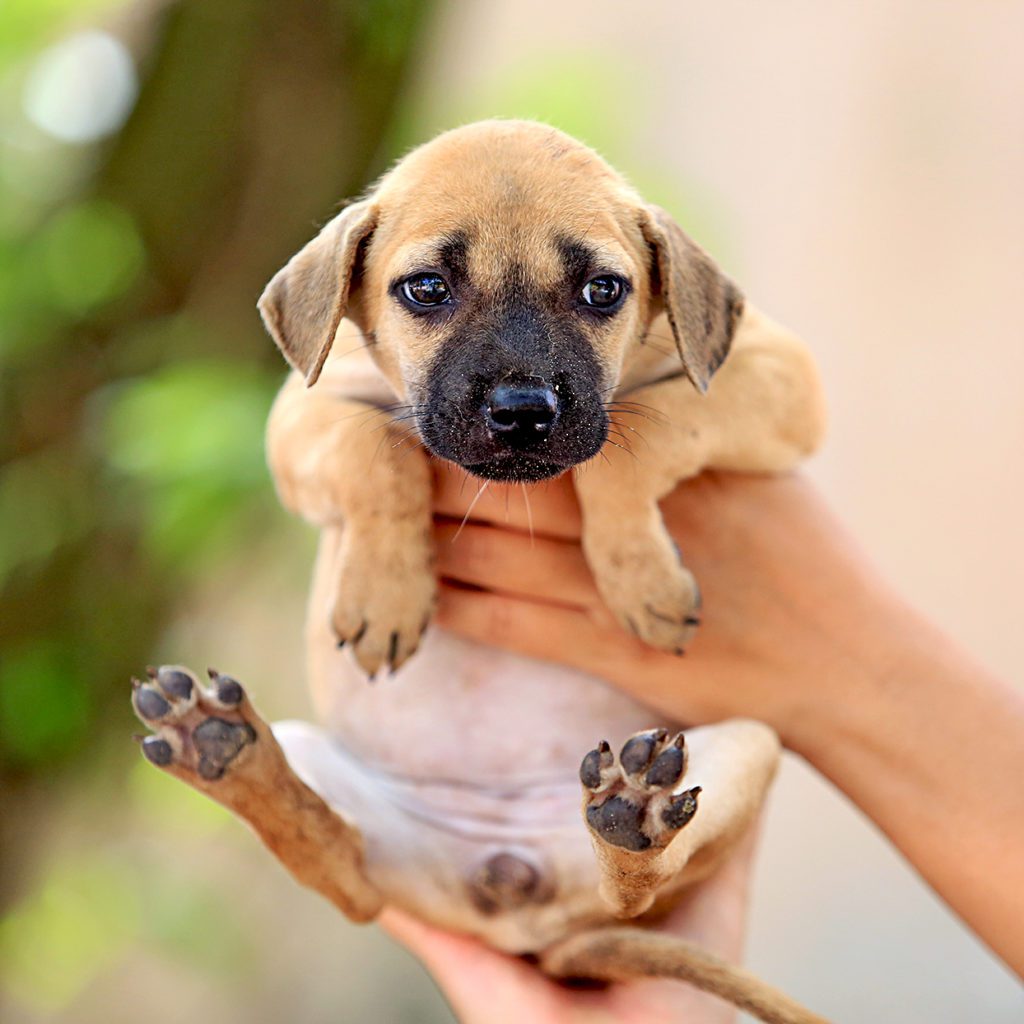 This training should be continued through adolescence and even into adulthood to minimize any aggressive tendencies. This dog breed is too large and too strong to not be thoroughly obedience trained. Because the Ridgeback is so intelligent and somewhat independent, training can be difficult and needs to be re-enforced often. This breed is very confidant and will test members of the family to try and find his place in the family hierarchy.

Overall the Ridgeback makes a wonderful companion and family dog as long as you let him know you are in charge. Ridgeback’s don’t bark much but make great watchdogs. Ridgebacks do best with experienced dog owners.

Rhodesian Ridgebacks need lots of exercise and do best with a large yard. Two runs per day are ideal but one long walk per day will suffice if you have a large yard. Remember that Ridgebacks are hounds with good sight and smell and love to participate in agility, lure-coursing and other tracking events.

See our article on “Fun Dog Activities” for information on these and other activities. Mature Ridgebacks still enjoy their walks but become quite mellow and enjoy a nap on the couch. This is a hardy breed that will tolerate exercise under most climatic conditions.

The Ridgeback is a low shedding and low maintenance dog breed and only requires regular brushing with a bristle brush and a hound glove. This breed only requires bathing very rarely.

Rhodesian Ridgebacks can be expected to live for about 11 or 12years. The most serious health problems are hip dysplasia and dermoid sinus (an opening into the skin on the dog’s back that can get infected). 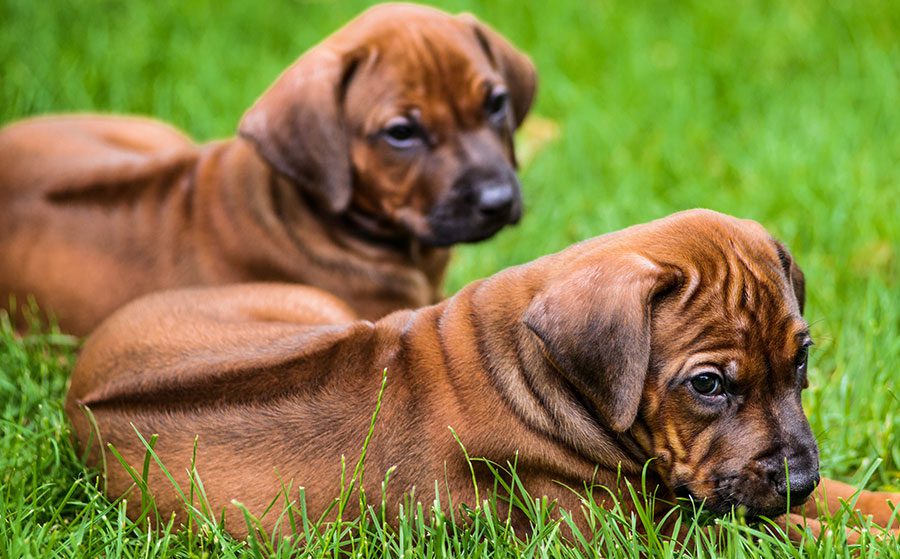 This is a fairly hardy breed but other common health problems that can occur include: back problems, some deafness, bloat, cancer and low thyroid. Before buying a Ridgeback puppy, ask your breeder for the Orthopedic Foundation for Animals (OFA) orthopedic and thyroid tests for the parents.