The Schipperke (pronounced SKIP-er-key) or Schip is a lively and agile small dog breed. The Schipperke has short, sturdy legs and a compact, muscular body. The Schip’s head is broad with a fox-like face, small triangular prick ears, dark brown eyes, and where permitted, a docked tail.

The Schip has a short, dense undercoat and a springy, harsh outer coat. Schipperkes have a longer fur around the neck – forming a mane and ruff, and also longer fur on the hindquarters – forming pants or culottes.

The most common color for this breed is solid black. Schips stand 10 to 13 inches tall at shoulder height and weigh from 12 to 18 pounds. 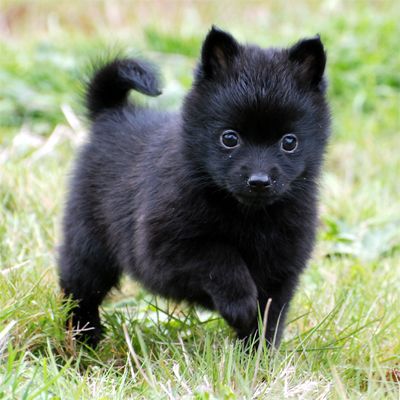 Schipperke puppies come in litters of 3 to 7 pups. Schip puppies are so cute that they are easy to spoil. Don’t spoil them and remember to start socialization and training as soon as the puppies have had their shots.

History of the Schipperke

The Schip was developed in Flanders and has existed for several centuries as a distinct breed in Belgium. This Flemish dog was probably developed from a now extinct Belgian sheepdog and may also include some Northern Spitz breed. Schipperkes were used as farm dogs and also as watch dogs and rat catchers on canal boats and barges.

In the late 19th century, Schips were imported into the US and the UK. The Schipperke Club of America was established in 1929. Schipperkes were ranked 80th out of 154 dog breeds registered by the AKC in 2005.

The Schipperke is curious, lively, alert, intelligent, brave, and loyal but also somewhat mischievous and independent. The Schip is an active, impulsive and inquisitive small dog that keeps busy indoors and outside.

The Schip is extremely fast and agile and must be kept on a leash or in a fenced yard as it will chase after small prey. Schips are very adaptable and make good farm dogs, family dogs or apartment dogs. They get along very well with older children or children and pets that have been raised with them.

Because Schips are somewhat independent and can be mischievous they should be socialized and trained, starting when they are puppies. Schips are quite intelligent and eager to learn.

They will learn fairly readily if you incorporate games with reward-based training. Schipperkes like to hear themselves bark so you will have to spend a fair amount of time training them to control their barking. Schipperkes are suspicious of strangers and can be feisty toward any strange animals that enter their domain. Schips make good watchdogs and do best with an experienced owner.

Although Schipperkes are small dogs, they need quite a bit of exercise to be happy. In addition to a daily walk, they should be allowed to run and play off-leash in the backyard or in a secure open area after they have been well trained to re-call. The Schip enjoys all types of fun dog activities such as obedience, flyball and agility competitions.

Schips only need brushing a few times a week except daily when shedding. Schipperkes are medium shedders.

The Schipperke is quite a hardy and healthy breed and should be expected to live for approximately 15 years. There are health problems in some bloodlines which include: eye diseases (progressive retinal atrophy, cataracts); orthopedic disorders (hip dysplasia, Legge-Calves-Perthes); epilepsy; and low thyroid. Schip buyers should ask for the breeding parents Orthopedic Foundation for Animals (OFA) test results and also the Canine Eye Registry (CERF) recent ophthalmologists report for eye disorders.