The Shar Pei or Chinese Shar-Pei is one of the seven Chinese dog breeds discussed in our article The Year of the Dog. The Shar Pei is an exotic looking medium dog breed with wrinkled skin and a large head with scowling features. 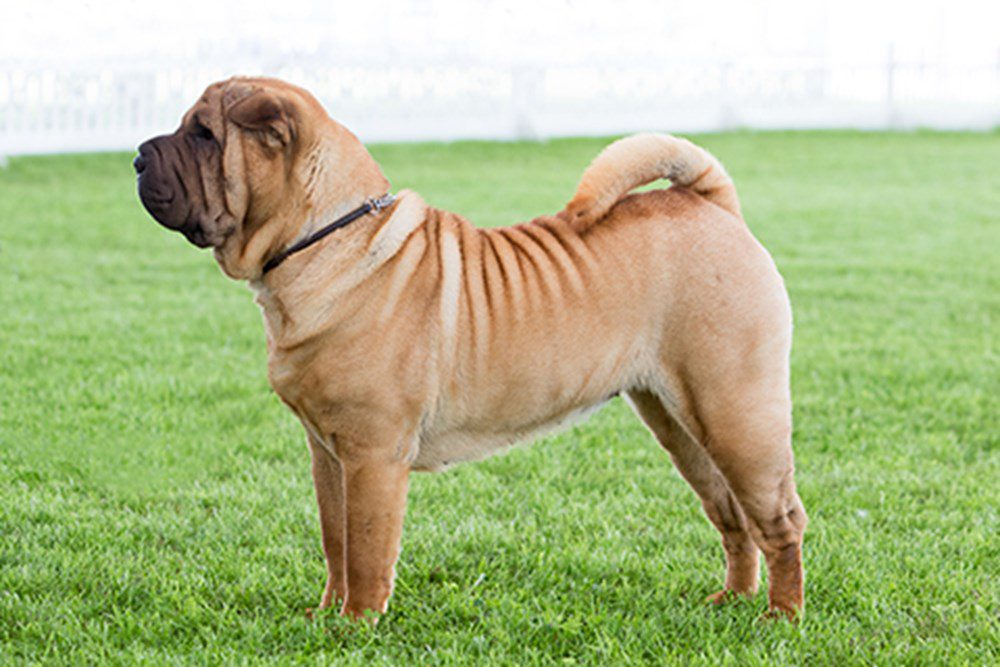 This medium-sized dog breed is compact and squarely built with muscular shoulders and a broad chest. The Shar Pei has: a large and broad head with wrinkles on the forehead and cheeks; a hippopotamus shaped muzzle; small and thick ears folded toward the eyes; a blue-black tongue; deep set dark eyes; and a natural tail carried in a curl.

The Shar Pei’s coat is very wrinkled in puppies and less wrinkled in mature adults. The Shar Pei has a single coat that varies from short and bristly to longer (no more than 1 inch) but still harsh to the touch. All solid colors (black, red, fawn, cream) are acceptable. The Chinese Shar-Pei is a member of the American Kennel Club (AKC) Non-Sporting Dog Group.

The lineage of the Chinese Shar-Pei can be traced back to the Han Dynasty when they found works of art featuring very similar appearing dogs. Some historians believe the breed was descended from a much larger (now extinct) Tibetan breed and others believe it is related to the Service Dogs of Southern China.

This hunting and herding dog was also known as the Chinese Fighting Dog, not because of its ferocity, but because it’s loose skin made it a formidable opponent in a dog fight. While the opponent dog grabbed the loose skin, the Shar Pei could turn within the skin and bite its attacker.

Shar Pei means something like “draping sandpaper skin” in Chinese. Like many Chinese dog breeds, Shar Peis almost became extinct when the Chinese Communist government imposed a steep dog tax in 1947 and their numbers sharply declined.

The breed survived in Hong Kong, Taiwan and British Columbia, Canada. The Chinese Shar-Pei is ranked 45th out of 154 dog breeds registered by the AKC in 2005.

Temperament of a Shar-Pei

The Shar Pei is serious, calm, dignified, quiet, confident, independent and is devoted to its family. Shar Peis are very clean and easy to house train but because of its independent and strong-willed manner they are difficult to obedience train.

The Shar Pei needs a lot of early socialization and training starting when it’s a puppy. Training must be firm and reward-based (food and praise) to control any aggressive tendencies and ensure household rules are followed. The Shar Pei is good with older children and is also does fine if raised with younger children from a puppy. However this breed may not get along well with other household cats and dogs.

The Chinese Shar-Pei still retains its hunting instincts and may not be a good choice for a farm or being allowed to run loose. The Shar Pei does best in a fenced yard and being walked on a leash where it can’t chase after other animals. Shar Peis tend to mind their own business unless provoked into aggressive behavior.

Shar Peis are aloof but not hostile toward strangers. The Shar Pei does best with an experienced owner who will not let this breed exert its dominance.

Shar Peis only need to be groomed occasionally with a rubber grooming mitt to remove dead hairs. However when shedding, they should be brushed daily with a bristle brush and bathed to removed dead hair. The breed only needs occasional bathing but should be massaged regularly with a towel. Check the skin folds regularly and clean them if necessary.

Shar Peis can be expected to live for 8 to 12 years. The breed has a number of common health problems including: orthopedic disorders such as hip dysplasia and luxating patella; eye disorders such entropion, ectropion and cataracts; skin problems like demodectosis and fold dermatitis; allergies like atopy; and low thyroid.

Information on some of these genetic diseases can be found in our article Hereditary Diseases in Dogs. Prospective buyers should ask for the breeding parents Orthopedic Foundation for Animals (OFA) test results and also the Canine Eye Registry (CERF) recent ophthalmologists report for eye disorders.