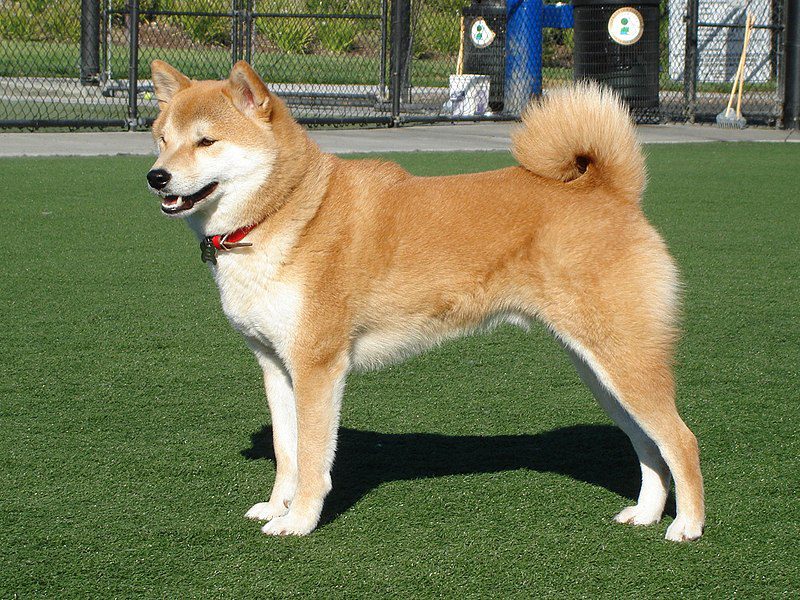 The Shiba Inu is a small dog and one of the oldest dog breeds in Japan. The Shiba is a small compact dog with a straight back and a thick tail that curls over the back. The Shiba has a broad forehead with small deep-set dark brown eyes and small triangular erect ears. Shiba Inus have double coats with a soft, dense undercoat and a straight harsh outer coat.

The most common color is a red coat with white markings on the muzzle. Other acceptable colors are sesame, red sesame, black sesame and black and tan. Male Shibas stand 14.5 to 16.5 inches tall and females 13.5 to 15.5 inches tall at shoulder height. Female Shibas weigh from 15 to 20 pounds and males from 20 to 25 pounds. 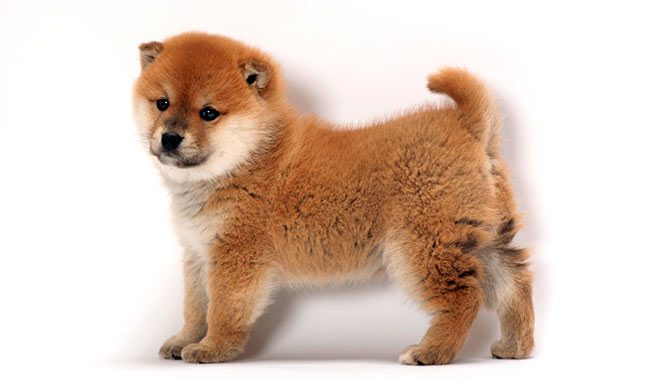 Shibas have litters of two to five puppies that must be kept warm as they are very susceptible to cold weather. Shiba puppies need to be thoroughly socialized as soon as they have had their shots to try and control aggression towards other dogs.

Obedience training using positive training methods should be started early and continued through adolescence. Male Shibas that aren’t going to be bred should be neutered before they are 6 months of age to prevent leg lifting.

Shibas are probably the oldest dog breed in Japan and bones from this breed have been found that date back to well before 400 BC. The breed is indigenous to Honshu, the main island of Japan.

The name Shiba means “brush wood” and Inu means “dog”. The name probably has something to do with the fact that Shibas were used for hunting birds, small game and even wild boars in the under brush.

In 1937 the Japanese government designated the Shiba Inu as a national monument and annuities were given to maintain championship bloodlines. Today the Shiba is the most popular household dog in Japan and is now ranked 66th out of 154 dog breeds registered by the AKC in 2005.

The Shiba is fearless, bold, high-spirited, smart, vigilant, loyal, charming but somewhat manipulative and independent. The Shiba is very clean and fairly quiet indoors but is definitely not a lap dog.

The Shiba has retained a high prey drive and should be kept on a leash or in a yard with very high fences. The Shiba Inu is very clever and a great jumper and this small breed can climb and jump over most fences.

The breed is very charming with people it knows and loves but is territorial and aggressive toward other dogs and pets. The Shiba doesn’t like to be chased and hugged by small children but does fine with children that have been raised with it or with older considerate children. Shibas are very smart but are somewhat mischievous and independent and can be difficult to train.

The Shiba doesn’t bark a lot but yodels and can let out a loud yodel or scream to let you know it is unhappy. Shibas that don’t want to do something can be very stubborn. Harsh training methods won’t work. The breed must be thoroughly socialized and obedience trained to limit its aggression toward other dogs. However once the Shiba is trained and learns to trust its owner, it can become a loving and obedient companion.

Shibas are aloof and cautious around strangers and make great watch dogs. The Shiba Inu does best with an experienced owner who is firm and consistent and uses positive reward-based training methods.

Shibas are active small dogs who need a couple of long walks each day. After they have been thoroughly socialized and trained, they will enjoy playing with other dogs. However male Shibas may still be aggressive toward other males and once loose may run after other small animals. Shibas can adapt to apartment living as long as they get sufficient exercise each day.

The Shiba is easy to maintain and only needs a weekly brushing to keep its coat looking good. Shibas are moderate shedders except twice per year when they become heavy shedders and will need daily brushing.

Shiba Inus can be expected to live for about 12 years and are generally a fairly healthy breed. There are some orthopedic problems such as hip dysplasia and luxating patella as well as von Willebrands disease in some bloodlines.