The Pitbull is a very popular and well-known breed of dog that makes a wonderful companion! In fact, the Pitbull isn’t just one breed, but is the name for four different distinct purebred breeds of dogs. While these dogs have a bad reputation for being an aggressive breed that don’t make good family dogs and shouldn’t be around children, we’re here to debunk that myth and show you what fantastic dogs these Pitties are. Keep reading below to find out more about the different types of pitbulls!

What Is A Pitbull?

The Pitbull was created in early 19th-century England for the popular spectator sports of bull and bear baiting. They were thought of as aggressive fighting dogs and this is where their bad reputation started. However, it was also known that they were very gentle with humans and made excellent family dogs.

All the Pitbull breeds are muscular and strong, making them athletic dogs. They also all have a square-shaped head and almond shaped eyes, along with a short and smooth coat which means they don’t require very much grooming or bathing. These dogs come in a range of colors, too.

The Pitbull breeds are known for being very affectionate and loving with their owners, making excellent family dogs and getting on very well with children. They need to be socialized from a young age so you can be sure they don’t inherit an aggressive streak, but when raised in the right environment are extremely gentle and kind dogs. 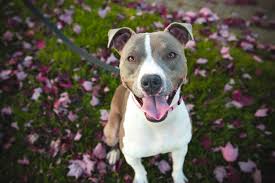 These dogs are very athletic and were used as farm dogs originally. However, they are also very loyal and friendly and so quickly became companions to the farmers, which is how they have remained ever since. These dogs are very affectionate and loving, making an excellent family pet.

The American Pitbull Terrier is the largest of the four Pitbull breeds and is the most athletic of the four. Unfortunately, their larger size means they are more prone to health conditions and they can also be more expensive than other breeds of Pitbull.

There are two variations of the American Pitbull Terrier — the Red Nose Pitbull and the Blue Nose Pitbull. Take a look at these dogs below. 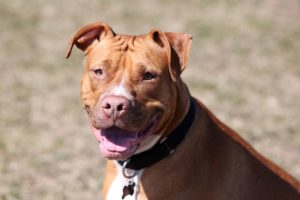 These pups have the same temperament and needs as the American Pitbull Terrier, although they do normally come at a higher price and can be prone to more health issues thanks to their recessive gene. They can also be bred unethically due to their rarity and popularity, so you must always make sure you are buying from a reputable breeder. 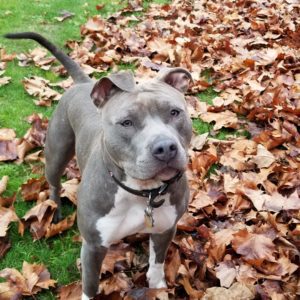 Again, these dogs come with a much higher price tag than standard American Pitbull Terriers. You should always make sure you are buying from a reputable breeder as there are many irresponsible breeders out there who like to profit off the high price of these dogs without caring about their health.

One downside to the Blue Nose Terrier is that the recessive gene that causes their unique coloring results in low melanin levels which can cause a range of health problems. These include a weakened immune system, deafness, cataracts, alopecia and a range of heart problems. 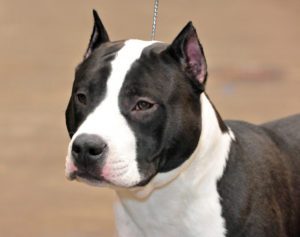 The American Staffordshire Pitbull Terrier is a very popular breed of dog. Recognized by the AKC but not recognized by the UKC, these pups are ranked at 85th out of 193 breeds on the popularity scale.

They are a great family companion and are known or their sweet and gentle nature that makes them an excellent choice around children. They are very sociable dogs and will get on not only with their owners but also everyone they come into contact with! Therefore, they don’t make the best guard dog but they do make wonderful dogs to have in your life. 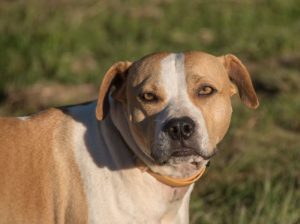 The Staffordshire Bull Terrier originated in the UK and continues to be one of the most popular dogs in Great Britain, yet the popularity has not caught on in the United States just yet. This breed is recognized by the AKC and the UKC. The Staffordshire Bull Terrier is the smallest out of the four Pitbull breeds, which makes them a great choice for those who don’t have a lot of room at home but still want to enjoy a Pitbull!

These dogs are known to be a very intelligent breed and therefore they are easy to train. They are also brave but affectionate and friendly with their owners, again making a wonderful family dog and playmate to children. They also have a great love for life, which means they will certainly keep you entertained and on your toes! 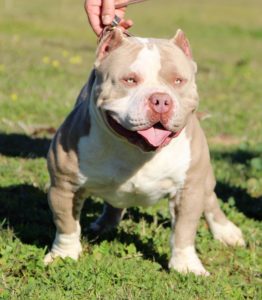 The American Bulldog is a very sweet-natured and loving dog. This is one of the reasons they were bred. This pup makes an excellent family dog because of their kind and affectionate nature. They also love attention and know how to show you that they love you — giving you lots of kisses and cuddles!

Due to the fact that Pitbulls are such popular breeds, it is no surprise that they have been crossed with other popular breeds to create wonderful hybrid dogs. Take a look at the most popular mixed types of Pitbulls below.

The Pitbull Boxer Mix, also known as the Bullboxer, is the result of crossing a Pitbull with a Boxer. With both parents historic fighting dogs, Bullboxers often have a bad reputation as being aggressive, but this couldn’t be further from the truth! These large dogs are a loyal and energetic companion for any family and their intelligence makes them playful and fun to be around.

The Boxer Pitbull Mix is a loyal and lovable dog that loves to be around people. Super playful, these pups just want to be outside with you, playing games and accompanying you on hikes. Because they love you and want to please you, they don’t do well when left alone and can suffer from separation anxiety.

These dogs are very intelligent, which is one of the reasons they love to play. Also because of their intelligence, they can get bored very easily. They must be kept entertained otherwise they can get frustrated and begin to exhibit signs of unwanted behaviors.

Often, these dogs can feel it is their duty to protect their owners and can make good watchdogs and guard dogs. They will bark when they feel something is out of place or if there is a threat, so this is something to watch out for!

The Pitbull Lab Mix, which is also sometimes known as a Bullador or Pitador, is the result of crossing a Pitbull with a Labrador Retriever. These hybrid pups are known for being an energetic and smart dog and, with half of their genes from the most popular breed of dog in the United States (the Labrador) there’s no wonder this breed is popular too.

Loyal and easy to train, the Pitbull Lab will make an excellent addition to any family and provide great companionship. Both the Pitbull and the Labrador Retriever are historically working dogs, so it comes as no surprise that the Pitbull Lab mix likes to keep themselves busy and entertained. Because of their high intelligence, they need to be constantly engaged and keeping busy so they don’t exhibit any destructive behaviors.

The Pitbull Lab thrives when they are around people and like to be right in the middle of everything, getting all the attention! They do not do well when left alone and can exhibit destructive behaviors and signs of separation anxiety. They can make an excellent playmate to children and get on very well with other animals, too.

The Pitsky is a cross between an American Pitbull Terrier and a Siberian Husky. The Pitsky is known to be a playful and affectionate dog that needs to be kept active. They can be stubborn which can make them difficult to train, but with the right family they can also make a perfect pet.

Normally, the Pitsky ranges in size between 30-70 lbs in weight and between 19-21” in height. Males are normally larger than females. Their ears can be short and pointy or long and floppy and it will vary based on their coat type. Like most Husky mixes they often have blue eyes thanks to their Husky parent.

Pitskies love to be outside exercising and will happily accompany you hiking or running. They are not a very relaxed dog and don’t like to sat at home doing nothing. They can be known to howl sometimes too, which can be the result of separation anxiety. Make sure these pups are in a household with lots of action, and they’ll be your best friend forever! 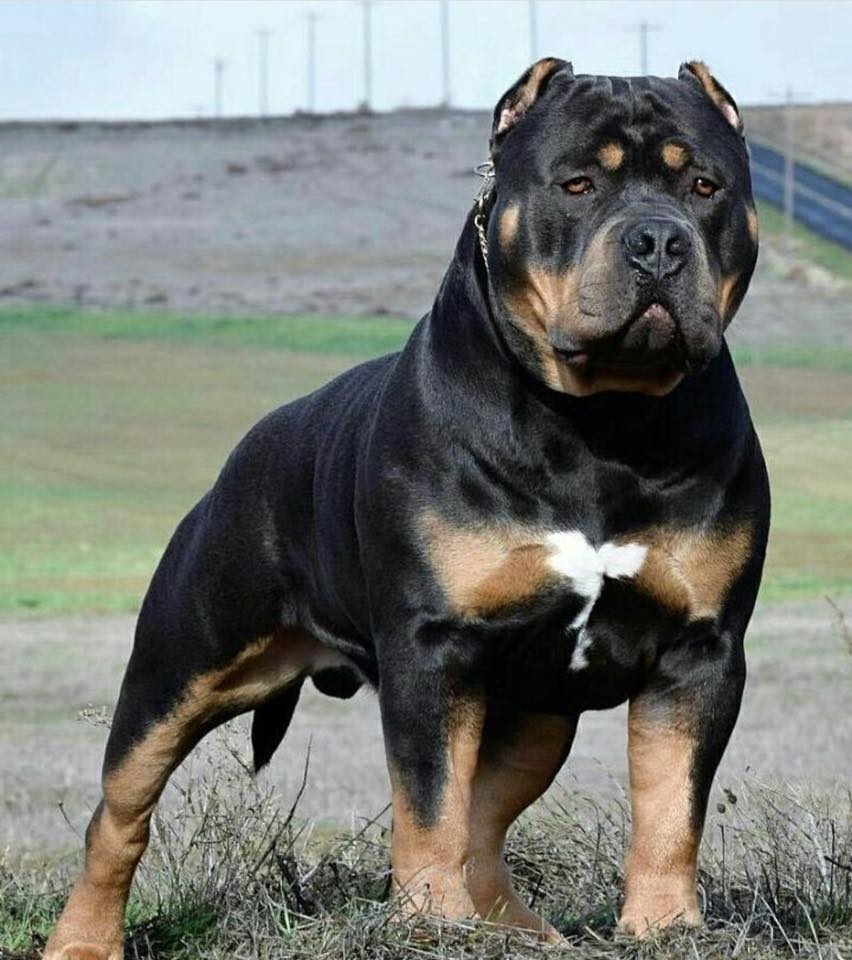 A Rottweiler Pitbull mix, sometimes known as a Pitweiler, is a huge, robust mixed-breed dog that would make an excellent guard dog or family watch dog.

Pitweilers have a range of coat colours depending on the parent mix, but they always have a short coat, a large head, and a deep nose, as well as big teeth!

A Pitweiler, despite its intimidating appearance, may be loyal and caring, but can also be distant. It’s a high-energy, well-built dog whose activity requirements should not be overlooked. This muscular dog is lively and should be kept away from youngsters and other dogs.

With early behavioural and socialisation training, this dog breed can become a faithful family dog that is both friendly and protective.

A Pitweiler puppy is a superb example of a mixed breed dog that is very cute.

Thanks to their fighting history, there is a common misconception that all Pitbulls are dangerous. However, when trained properly and brought up in a loving and caring environment, Pitbulls are affectionate, loyal dogs and love to be around people. They have been known to exhibit signs of aggression when not trained properly or when they do not receive enough social interaction, but if you raise your pup right you shouldn’t feel in danger when around them.

In some areas of the United States, Australia and the UK, Pitbulls and other related dog breeds are under breed-specific laws. These laws prevent residents in those areas from owning these dogs, except from under special circumstances. Pitbulls in these areas are seen as a danger because of their reputation, even though there is a huge amount of evidence to show that when trained properly Pitbulls make great pets.

Despite their bad reputation as an aggressive dog, the four breed types of Pitbulls are wonderful, loving, friendly and affectionate companions that can make an excellent family dog. The American Pitbull Terrier, the American Staffordshire Terrier, the Staffordshire Bull Terrier and the American Bully all fall under the umbrella term of “Pitbull” and, although all have slightly different needs, are playful and fun-loving dogs. While these dogs do need quite a bit of exercise, they’re certainly worth it thanks to their big heart. If you think you can raise one of these breeds in a caring and safe environment, they’ll certainly be your best friend for life.