The Vizsla (pronounced VEESH-la) or Short-haired Vizsla is a medium- to large-sized hunting dog breed with an elegant bearing and strong and muscular appearance. This handsome short-haired hunting dog is robust but not too heavily built.

The body is longer than shoulder height with a straight back and low set tail that is docked at the last joint in countries where permitted. Vizlas have an elegant and slightly domed head with natural hanging ears and intelligent looking oval eyes.

The Vizla’s coat is short, smooth, dense and lies close to the skin. The only allowable coat colors are various shades of golden rust. Very small white markings on the chest and feet are permitted. Vizslas stand from 21 to 24 inches tall at shoulder height and can weigh from 42 to 58 pounds. 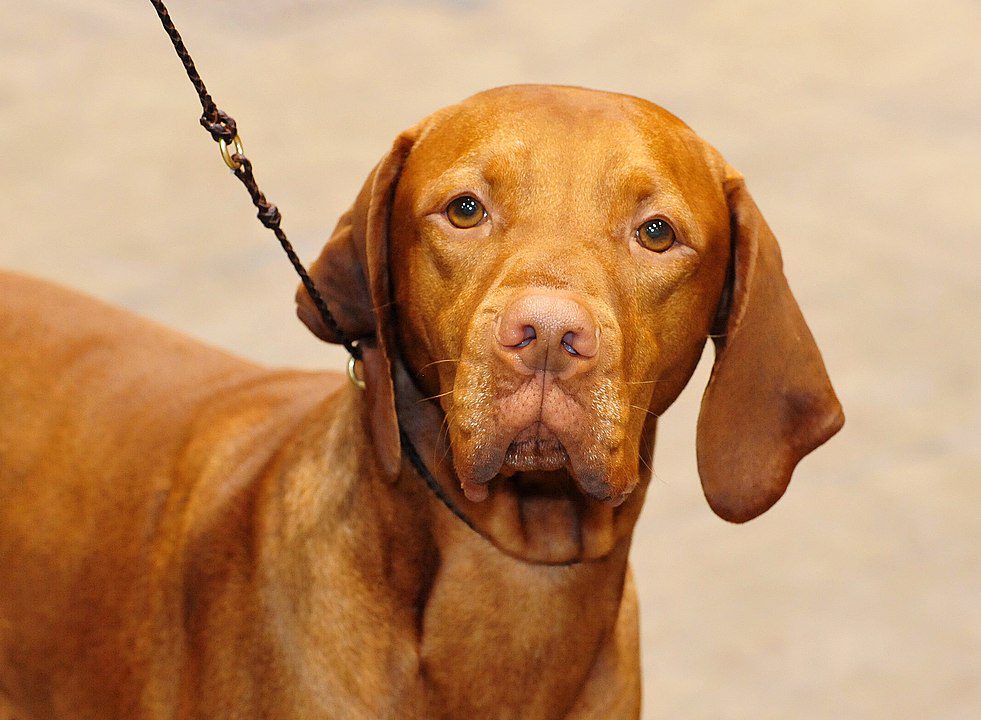 Vizslas are a very old breed whose ancestors are thought to be the hunting and companion dogs belonging to the nomadic Magyar hordes which spread over Europe more than 1000 years ago and eventually settled in Hungary. This breed is depicted in 10th century etchings and described in 14th century manuscripts. This hunting dog breed was a favorite of early barons, warlords and other nobles who preserved the purity of the bloodlines over many centuries, Vizslas evolved into superb partridge and rabbit hunting dogs that combined the best attributes of both pointers and retrievers.

The Vizsla is lively, sweet, affectionate and somewhat sensitive. This athletic, sporty and agile breed needs lots of exercise and lots of human companionship. Vizlas must be socialized and trained early to build confidence and prevent neurotic behavior. Early socialization while puppies will prevent shyness with strangers. This breed does not like to be left alone and too much confinement and too little companionship will lead to neurotic and destructive behavior. This is not a city dog and it needs to live with a very active family, Vizslas get along well and love to play with older children. Early socialization and ongoing training will ensure they get along well with most other dogs, pets and even strangers.

Young Vizslas tend to mouth everything including hands and they should be given lots of toys to chew and carry with them. Like most pointers, Vizslas can be somewhat independent but unlike many pointers they can be trained for conformation, field and obedience competitions. Reward-based and motivational training work best. Vizslas are very affectionate and if given sufficient exercise will become lap dogs when indoors. Vizslas do fine with first time or novice owners who are prepared to invest a lot of time in ongoing socialization and training. They make pretty good watchdogs.

Vizslas don’t have to be used as hunting dogs but they should be part of an active family that will take them for long walks, biking and/or runs. This breed particularly enjoys swimming, retrieving and a romp off-leash with another dog. Two runs per day will keep the Vizsla calm and content indoors. Vizlas can be trained to a high level to compete in conformation, field and obedience competitions.

Grooming requirements for this breed are minimal. The Vizsla is a low shedding dog breed but should be brushed weekly to remove any dead hair. The ears should also be inspected regularly.

Vizslas can be expected to live for 11 to 14 years. There are some common genetic problems in some blood lines. These include hip dysplasia, sebaceous adenitis (inflamed skin glands), and eye problems such as corneal dystrophy and entropion.