The West Highland White Terrier or Westie is a sturdy small terrier dog breed. The Westie has a compact and strong body with a deep chest, level back and short muscular legs. The feet are round with the forefeet being larger than the hind feet. The tail is set high and about 4.5 to 6 inches long. The Westie’s ears are small, pointed and erect and covered in smooth hair. The head is thickly coated with hair that frames the face and the muzzle has a moderate stop with dark wide-set eyes.

The harsh outer coat is about 2 inches long and straight to wavy, not curly, and the undercoat is short and soft. The Westie’s coat is always pure white. Westies stand about 10 or 11 inches tall at shoulder height and weigh from 15 to 20 pounds. 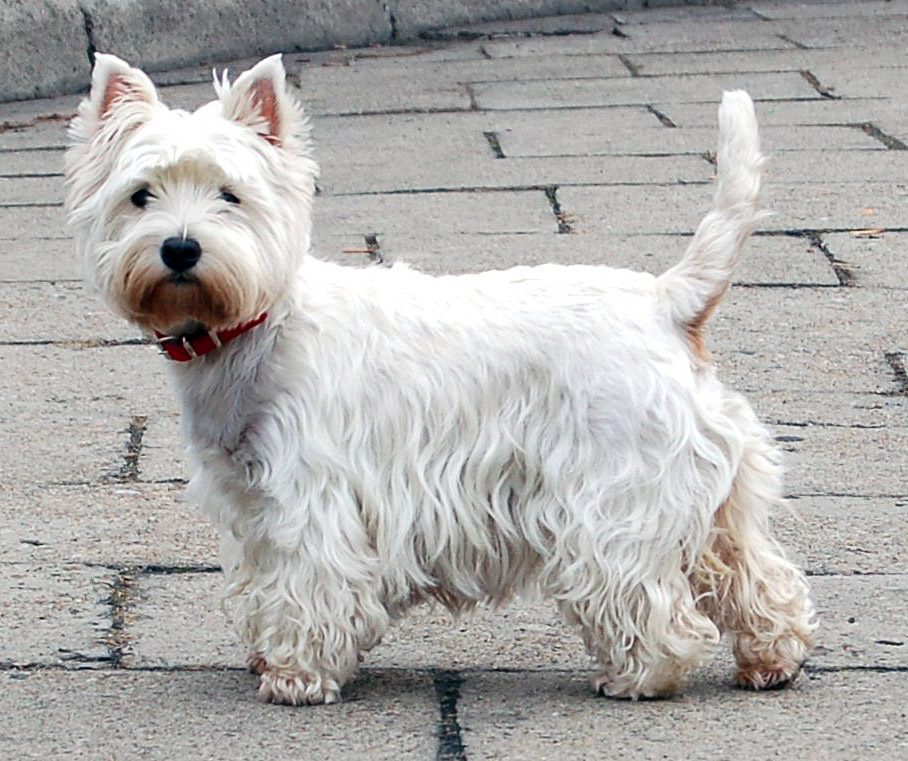 The Westie was bred to hunt otter, fox and vermin in Scotland. The West Highland White shares its ancestry with the Scottish, Cairn and Dandie Dinmont Terriers. In the 19th century, selective breeding of all-white terriers occurred in Poltalloch in Argyll, which led to the development of the West Highland White.

The Westie was initially called the Poltalloch Terrier and also the Roseneath Terrier after the estate of the Duke of Argyll. Initially registered by the AKC as the Roseneath Terrier the name was changed to the West Highland White Terrier in 1909. Today the Westie has left its hunting past behind and is a popular companion dog. The Welsh Terrier was ranked 32nd out of 154 dog breeds registered by the AKC in 2005.

The West Highland White is cheerful, bold, assertive, courageous, inquisitive and has a great deal of personality. The Westie needs to get involved in everything that is happening in the home. The Westie is easier to handle and friendlier than many other terriers but still needs his daily walks and play sessions. Westies will try and dominate dogs of the same sex but otherwise get along better with other dogs and cats than most terriers. However the Westie still has its hunting prey drive and will pursue any small animals and rodents.

Therefore this breed shouldn’t be let off leash except in a fenced enclosed area. The Westie does fine with older children but few will tolerate mauling by young children and they are very possessive of their toys and food. Westies are clever but somewhat stubborn like most terriers and can become demanding if spoiled.

They also can become diggers and barkers unless controlled. Westies respond well to positive discipline and training that uses praise and food rewards. Westies are sociable toward strangers but will bark to announce their arrival. West Highland Whites make good watchdogs and do fine with first-time owners.

West Highland Whites need more exercise than just playing games indoors and should be taken for a couple of walks each day along with some interactive play sessions. Westies should be kept on a leash and need a fenced yard so they don’t wander off in search of prey. Westies are terriers and they love to dig. Westies are intelligent and with the right approach can be trained to compete in sports such as agility and flyball.

Grooming requirements for this breed depend on whether it is a show or a companion dog. Show dogs will require hand plucking or “stripping” of the dead hair every month or two. Pets can be clipped and the bottom trimmed for cleanliness. Most owners have their Westies professionally groomed every few months.

The Westies coat is hard and therefore it shouldn’t be washed too frequently otherwise it will become too flabby. A twice weekly brushing is usually all that is required to remove any dirt and debris. West Highland Whites are a low-shedding dog breed and are said to be hypoallergenic and good for people with allergies.