You are here: Home / Dog Breeds / The White German Shepherd – All The Facts About This Magnificent Breed 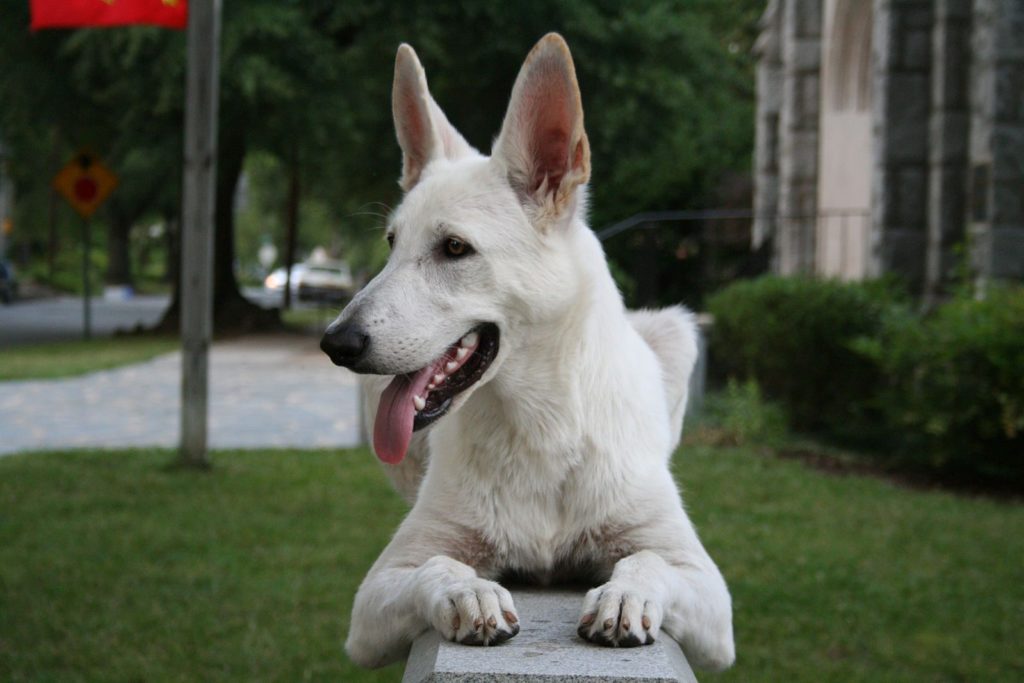 The White German Shepherd is known for it’s plush white coat, it’s athletic body and it’s high intelligence. This unique dog is bred from German Shepherds and carries many of the same characteristics, yet it also carries the recessive white furred coat gene.

So, as long as you don’t mind a bit of extra time spent on grooming, you’ll still get a loving and loyal German Shepherd as your trusty companion.

Read on below to find out more about this special breed of dog and whether they could be the right pup for you.

History Of The White German Shepherd

The German Shepherd is the second most registered breed according to the American Kennel Club (AKC). They are very popular working dogs who are known for their work as police dogs, military dogs and herding dogs. They are also very popular family dogs because of their loyalty and protective nature.

He adopted one of these dogs and named them “Horand” and then created the “Verein für Deutsche Schäferhunde”, the Society for the German Shepherd Dog.

Horand was the first breed standard for the German Shepherd breed and was bred alongside dogs with a similar appearance to give German Shepherd litters. They are thought to have first appeared in the United States in 1906 and were recognized by the AKC in 1908. 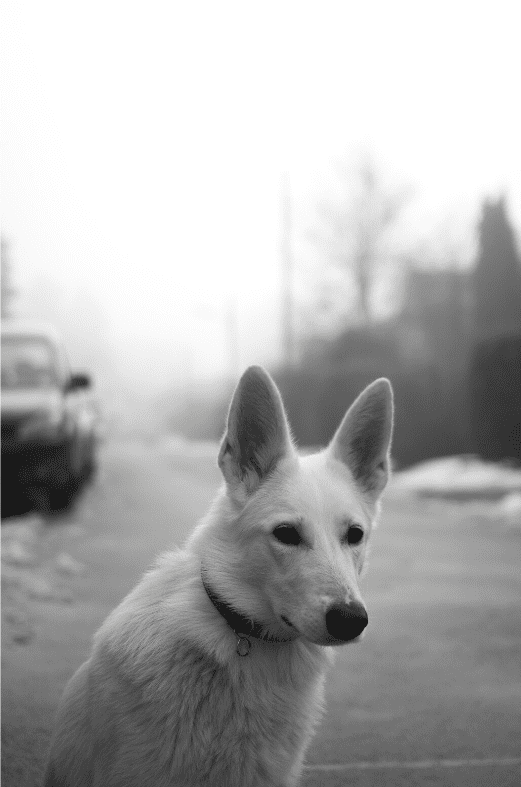 Characteristics Of The White German Shepherd

White German Shepherd’s have many of the same characteristics as other German Shepherds. As puppies, they are born in litters of around five to ten puppies and can cost anywhere between $750 to $1000.

White German Shepherd puppies look like little balls of fluff and are extremely cute! However, they grow very quickly and reach 50% of their adult size normally by around 4 months. By 1 year of age, they should be at their adult height.

The White German Shepherd can weigh anywhere between 50 to 85 pounds with a male weighing more than a female. They are classified as a large dog breed and stand tall at 22 to 26 inches at the shoulder. Again, females are normally shorter than the males.

They are a very muscular and athletic breed, which is no surprise because they were bred for their working capabilities. They are very strong and wear a proud posture and have erect ears. Their feet are big too, even when they are puppies!

When they are a puppy, their coat is normally super fluffy. It does become more coarse as they get older, but their ears remain fluffy. Their coat is also a double-coat which helps add protection against harsh winds or rain.

Of course, the coat color of the White German Shepherd is white! This is what makes them stand out and a unique breed. The white coat recessive gene only impacts the fur color and does not have any effect on their skin or eye pigment.

This makes identifying a white German Shepherd very simple and also closely resembles their wolf ancestors. In every other aspect, they mirror the appearance of a standard tan German Shepherd with the same dark brown eyes.

The White German Shepherd, as are all German Shepherds, are known for their loyalty. They are very protective and make excellent guard dogs or watchdogs. They are also extremely loyal and love to be around people, which makes them a great family dog as well as an excellent working dog.

A White Shepherd is an active dog and needs to be mentally stimulated. As we mentioned above, they are originally a working dog and love to be outside running and playing. They don’t like to be left alone and don’t like to be cooped up in a small apartment, and can become bored and destructive.

The life expectancy of a White German Shepherd is relatively long. They can live between 12 to 14 years.

The most common health problem for the German Shepherd dog breed is elbow dysplasia and hip dysplasia. Dysplasia is a condition that is seen in many large dogs and is a disease of a malformation of the joints. The joints can become very painful and may worsen over time causing lameness.

The best way to ensure your pup is less prone to any of these conditions is to buy from a reputable breeder and to ensure you get health clearances from both parents. You should also check your dog often for any signs of these issues and take them to the vet regularly for checkups. 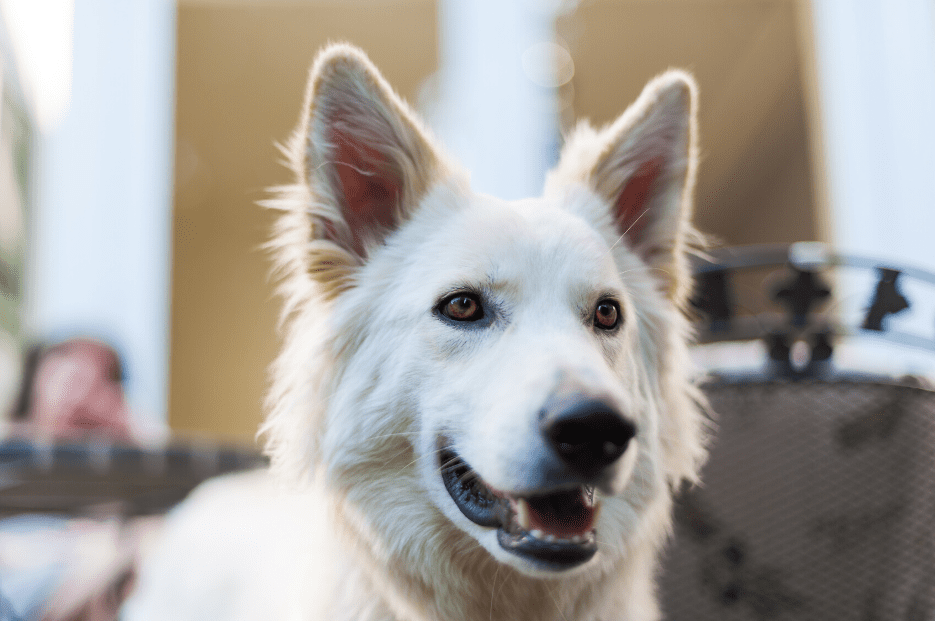 Now you know all about the characteristics and traits of this unique German Shepherd breed, it is time to take a look at what daily life with them is like. We will look at what to feed this dog, how much exercise they need and what grooming of this big breed should be. It comes as no surprise that this is a high maintenance dog breed, but they are worth it!

Because the White Shepherd is a large dog, their diet should also be large. It is recommended that you feed them a diet specially formulated for large dog breeds and you should always check the back of the dog food packet to see how much food you should be feeding your doggie based on their weight.

Experts recommend that a White German Shepherd should be eating around 1500 calories a day, which is around 3 cups of food. As a puppy, they should be fed three times a day which can then be decreased to two meals a day as an adult. However, if you have a busy lifestyle then this can just be one meal a day.

Their food should be healthy and nutritious. It should cover all the nutrients that a dog of this size needs, including proteins, fats and carbohydrates. High-quality dry kibble is a great option, although some dog owners opt to feed their pup raw food.

It is not a surprise that this breed of white dog is very active and has high exercise needs. As a working dog and a breed that is often used as a police dog, they need lots of mental and physical stimulation to keep them happy.

You should ensure that you are exercising your German Shepherd for 60 to 90 minutes a day. This includes walks, playing and mental games. Your doggie will want a big back yard to run around in too, so they will not be getting the exercise they need if you live in a small apartment. Without adequate exercise, they can develop unwanted and destructive behaviors due to frustration and boredom.

A White Shepherd makes an excellent family dog. Because they are so loyal, they will want to protect you from anything harmful, which makes them an excellent guard dog. However, you will need to train them from a young age to understand that not everything is a threat, otherwise they may well bark for hours!

We mentioned above how much exercise a German Shepherd needs. As a working dog, they need lots of physical and mental stimulation, so they are the perfect pet for those who are outside a lot. They’re also the perfect hiking or running companion and will do well in a very active family environment because of their high energy.

Because they are a large dog, they also need a good amount of space. This includes a back yard that they can run around in. Your German Shepherd will not thrive in a small apartment as they will feel like they are being cooped up and may begin to exhibit destructive behaviors.

This breed does have a naturally high prey drive, so you will need to take care when introducing them to children for the first time. That being said, when socialized properly, White German Shepherds love children and will even take your children under their wing.

The older your dog is, the harder it will be to introduce them to new things and people, but it still can be done. They also get on very well with other family pets, so there will be no issue there and they will become a loved family member.

The White German Shepherd is a very intelligent dog and is therefore very easy to train. Their ease of training means that they make a great family dog as well as a dog for couples or individuals. You should train them from a very young age and always use positive reinforcement. This can include verbal praise and yummy treats to show them that they are doing a good job.

German Shepherds can be a little stubborn, so you should never punish them or scold them. They’ll also do a lot better if you have given them a lot of time to exercise before you decide to conduct a training session. They are great detectives too, so hiding treats and getting them to sniff the treats out makes a fun game to play!

Unfortunately, your White German Shepherd will shed all year round. This is because their coat is so thick. One way to minimize shed is to ensure that you brush them at least two to three times a week. Bathing is not necessary often — only when they look dirty. Brushing their teeth is very important to prevent dental decay and gum disease, although you can give them dental chews every day to help keep their teeth clean.

One way to ensure that grooming your German Shepherd is not a traumatic experience for them is to begin grooming them from a young age. This will show them that there is nothing to be afraid of. 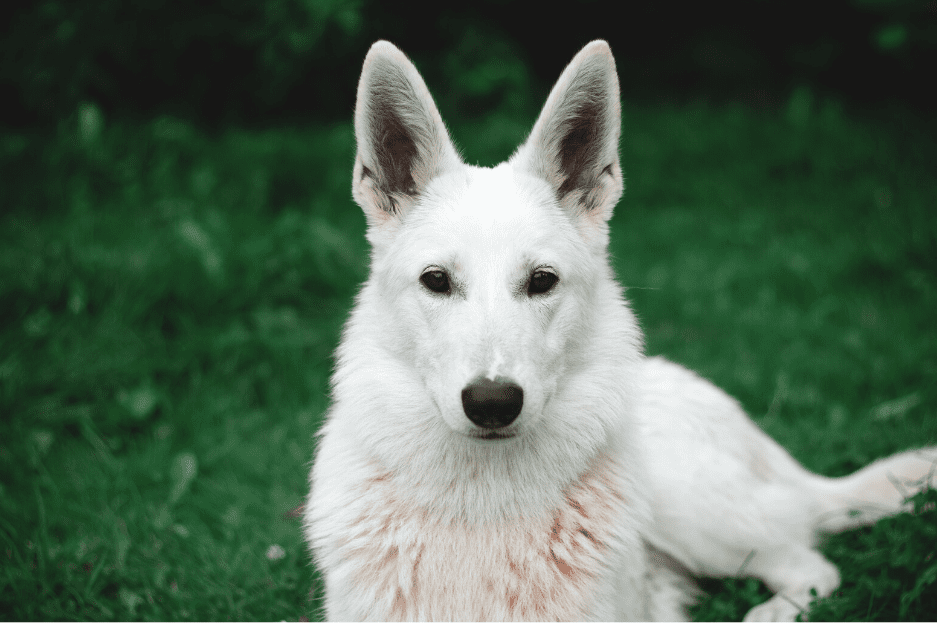 However, there is very little difference between the white and tan German Shepherds, apart from their coats.

How much do White German Shepherds cost?

White Shepherds usually cost between $750 to $1000. You should always make sure you are buying from a reputable breeder. If this is out of your price range, you can always take a look at your local shelter and see if there are any White German Shepherds who need a home.

White German Shepherds are a loyal and friendly dog. Genetically no different to a tan German Shepherd, these pups are just as protective and love to be around you. Excellent working dogs, your German pup will make a great guard dog as well as a cuddly companion to lay on the couch with. Although their grooming and exercise needs are high, these fluffy animals are certainly worth it and we know you’d love to have one in your life!