Espanola Island is part of the Galapagos Islands. The English named it Hood Island.

It is located in the extreme southeast of the archipelago and is considered, along with Santa Fe, one of the oldest islands, at approximately four million years old.

A popular tourist stop, Isla Espanola is the most southerly island in the Galapagos Archipelago. Tourists come to see the albatrosses and the mating dances of blue-footed booby birds on Espanola Island. Because of its great variety of sea birds it is very popular with birdwatchers.

Two spots are especially popular with visitors: Bahía Gardner, which has a lovely beach and Punta Suárez, because of its varied bird life. This island has its own species of animals, such as the Espanola mockingbird, which has a longer and more curved beak than the one on the central islands, the Espanola lava lizard and the marine Iguana. 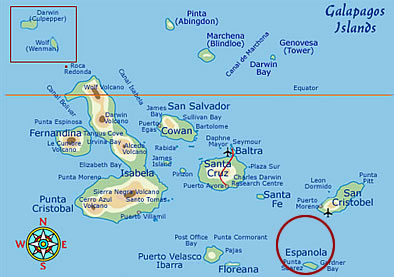 Gardner Bay is a 1 kilometre long beach that is one of the most magnificent in all Galapagos. It is home to many sea lion colonies and the turquoise colored water makes a beautiful contrast to the white sand that consists of shell dust. On the rocks, marine iguanas and sally light-foot crab mingle. Mockingbirds fight for their territory and inspect the backpacks of the tourists.