Fernandina Island is the third largest and youngest island of the Galápagos Islands which lies on the eastward side of the archipelago. Fernandina has an area of 642 square kilometres (248 square miles) and a maximum altitude of 1,494 metres (4,902 feet). The island is an active shield volcano that last erupted on Friday May 13 2005.

The volcanoes on Fernandina a still quite active and you have the highest possibility to see a volcanic eruption. The island was formed by the Galápagos hotspot. The southern flank of the volcano had a fissure eruption that generated flows, which subsided within hours. 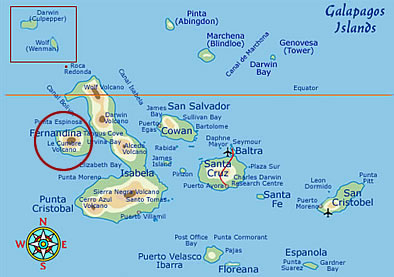 The visitor site Punta Espinoza is situated at the northeast coast of the island. There you find the biggest colony of marine iguanas. Hundreds of them are sunbathing on the lava rocks. The island is home to flightless cormorants, Galapagos penguins and sea lions.

Mangroves and cacti dominate the vegetation. You can also see extraordinary lava formations. Different types of lava flows can be compared and the Mangrove Forests can be observed.

The name was given in honor of King Ferdinand II of Aragon, who sponsored the voyage of Columbus.

Due to its recent volcanic activity, the island does not present much plant life and it has a rather grey ambiance. Visitors to Fernandina Island will be taken to see only the outside skirts of this crater for safety reasons.