Below is a diagram of the anatomy of a typical fish. 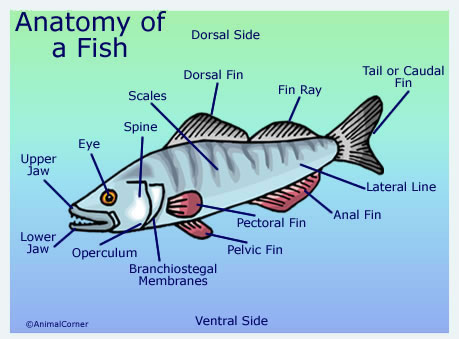 Fish anatomy is primarily governed by the physical characteristics of water, which is much denser than air, holds a relatively small amount of dissolved oxygen, and absorbs light more than air does.

Nearly all fish have a streamlined body plan, which is divided into head, trunk and tail, although the dividing points are not always externally visible.

The head of a fish includes the snout, from the eye to the forwardmost point of the upper jaw, the operculum or gill cover, and the cheek, which extends from eye to preopercle. The lower jaw defines a chin. The head may have several fleshy structures known as barbels, which may be very long and resemble whiskers. Many fish species also have a variety of protrusions or spines on the head. The nostrils or nares of almost all fishes do not connect to the oral cavity, but are pits of varying shape and depth.

The outer body of many fish is covered with scales. Some species of fish are covered instead by scutes. Others have no outer covering on the skin; these are called naked fish. Most fish are covered in a protective layer of slime (mucus).

The lateral line is a sense organ used to detect movement and vibration in the surrounding water. It consists of a line of receptors running along each side of the fish. The caudal peduncle is the narrow part of the fishes body to which the caudal or tail fin is attached. The hypural joint is the joint between the caudal fin and the last of the vertebrae.

The fins are the most distinctive features of a fish.

For every fin, there are a number of fish species in which this particular fin has been lost during evolution.