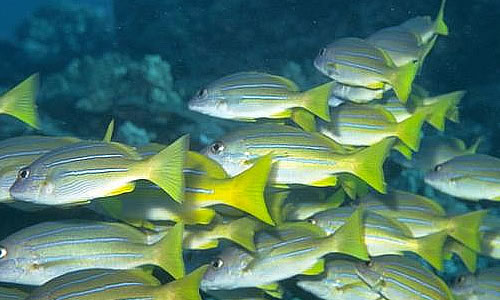 A fish is a water-dwelling vertebrate with gills. Most are cold-blooded, though some, such as some species of tuna and shark, are warm-blooded. There are over 29,000 species of fish, making them the most diverse group of vertebrates. Taxonomically, fish are a paraphyletic group whose exact relationships are much debated.

Fish come in different sizes, from the 16 metres (52.49 feet) whale shark to a 8 millimetre (just over a quarter of an inch) long stout infant fish. Many types of aquatic animals named ‘fish’, such as jellyfish and cuttlefish, are not true fish. Other sea dwelling creatures, like dolphins, while closely resembling fish in outer appearance, are actually mammals.

Fish are an important source of food in many cultures. Other water-dwelling animals such as mollusks, crustaceans, and shellfish are often called ‘fish’ when used as food.

Difference between male and female fish: In some species the males and females have different shaped bodies or different coloring; in other species there is no visible difference.

How fish breathe:  Some fish have lungs and breathe air, but most breathe through gills. Gills are made up of thin sheets of tissue richly supplied with blood vessels. As water passes over them dissolved oxygen is absorbed into the blood and waste products such as carbon dioxide pass out into the water. The gills are protected by a large bony plate called an operculum.

What is a lateral line:  Lateral lines are usually visible as faint lines running lengthwise down each side, from the vicinity of the gill covers to the base of the tail also known as a row of scales that most fish have along their sides, stretching from their head to tail. Under these scales are a system of fluid-filled canals and specialized cells which transmit vibrations to the brain. The lateral line helps fish to detect objects including predators and prey.

Why are fish slimy: Fish secrete a type of mucus from their skin. This slime coating is important because it provides protection against parasites and diseases, covers wounds to prevent infection and helps fish move through the water faster.

Some species release toxins in their slime which ward off attacking creatures while others use their slime to feed their young.

What eats fish: Other fish, birds (e.g. pelicans, cormorants and herons), snakes, turtles, crustaceans, some insect larvae (e.g. dragonfly larvae), and humans. In other parts of the world there are also animals such as wild cats, wild pigs and bears that feed on fish.

Fish Reproduction: The eggs of fish are fertilized either externally or internally, depending on species. The female usually lays the eggs, and the embryos in the eggs develop and hatch outside her body. These kind of fish are called ‘oviparous’ fish. Oviparous fish develop by obtaining food from the yolk in the egg. Salmon, for example, are oviparous.

Ovoviviparous fish keep the eggs inside of the mothers body after internal fertilization. Each embryo develops in its own egg. The young are ‘born alive’ like most mammals.

Livebearers is a term used to describe fish who give birth to live young. The eggs are fertilized internally by a male through an organ called a ‘gonopodium’. The eggs are kept inside the female until they hatch. The female then releases the ‘fry’ into the water.

Livebearers young do not have egg yolks and can swim by themselves in under 24 hours. The most common livebearing species are the guppy, platy, Poecilia (molly) and swordtail.

Fish Conservation: As of 2006, the IUCN Red List describes 1,173 species of fish as being threatened with extinction. Included on this list are species such as Atlantic cod, Devil’s Hole pupfish, coelacanths, and great white sharks.

Because fish live underwater they are much more difficult to study than terrestrial animals and plants and information about fish populations is often lacking. However, freshwater fish seem particularly threatened because they often live in relatively small areas. The Devil’s Hole pupfish is the smallest desert pupfish species and occupies a single pool 3 metres by 6 metres.