Floreana was the first inhabited island and has an exciting human history. It includes the mysterious deaths of several inhabitants that have not been solved until today. There are fresh water wells as this area was used by the early settlers who found refuge in the caves nearby. It is also home to the endemic medium tree finch that only exists on this island.

The island was named after Juan José Flores, the first president of Ecuador, during whose administration the government of Ecuador took possession of the archipelago. It is also called Santa Maria after one of the caravels of Columbus.

It has an area of 173 square kilometres (66.8 square miles) and a maximum altitude of 640 metres (2,100 feet). Pink flamingos and green sea turtles nest (December to May) on this island. The Galapagos storm petrel is also found here, a sea bird which spends most of its life away from land. At Post Office Bay, since the 18th century whalers kept a wooden barrel that served as post office so that mail could be picked up and delivered to their destination mainly Europe and the United States by ships on their way home. At the ‘Devil’s Crown’, underwater volcanic cone formations are found. 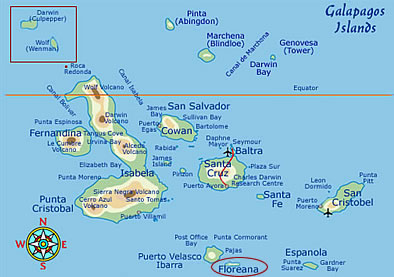 Punta Cormorant is a light-green beach with a sea lion colony. You can observe several dozens flamingos there as well as oystercatchers, willets, whimbrels, black-necked stilt and white-cheeked pintail ducks. Galapagos hawks hover over the lagoon.

The path crosses the isthmus and leads to a beautiful beach with beautiful white sand where you can go swimming. White-tipped reef shark and stingrays are common here. From December to March pacific green sea turtles use this site to burrow their eggs.

There are several underwater tunnels to be explored in the surrounding seas. There are also nesting sites of pelicans, lava gulls, herons and red-billed tropicbirds.