The Sei Whale (Balaenoptera borealis) is the third largest rorqual after the Blue Whale and the Fin Whale. It can be found worldwide in all oceans and adjoining seas and prefers deep off-shore waters. The Sei Whale migrates annually from cool and subpolar waters in summer to temperate and subtropical waters for winter.

The Sei whales reach lengths of up to 20 metres (66 feet) long and weigh up to 45 tons. The Sei Whale consumes an average of 900 kilograms (2,000 pounds) of food each day, primarily copepods and krill, and other zooplankton. The Sei Whale is among the fastest of all cetaceans and can reach speeds of up to 50 kilometres per hour (31 miles per hour) over short distances. 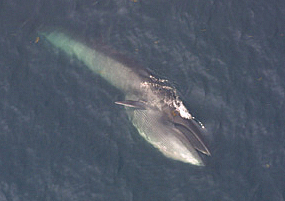 The Sei whale could be confused with the Bryde’s whale, but it does not arch its back as much as the Bryde’s when it blows, so at the surface the whale appears very gentle when appearing or when disappearing.

The Sei whales body is typically a dark steel grey with irregular light grey to white markings on the ventral surface, or towards the front of the lower body.

The Sei whale has a series of 32 – 60 pleats or grooves along the bottom of the body that allow the throat area to expand greatly during feeding. The snout is pointed and the pectoral fins are relatively short compared to other whales. It has single ridge extending from the tip of the snout to the paired blowholes that are a distinctive characteristic of baleen whales. The whale’s skin is often marked by pits. It has a tall, sickle-shaped dorsal fin that ranges in height from 25 – 61 centimetres (10 – 24 inches) and is set about two-thirds of the way back from the tip of the snout. Their tail is thick and the fluke is relatively small in relation to the size of the whales body.

The Sei whale is a filter feeder, using its baleen plates to obtain its food from the water by opening its mouth, engulfing large amounts of the water containing the food, then straining the water out through the baleen, trapping any food items inside its mouth.

Sei Whales usually travel alone or in small groups of up to six individuals. Larger groups have been seen at particularly abundant feeding grounds. Very little is known about their social structure. Males and females may form a bond, but there is insufficient research to know this for certain. Mating occurs in temperate, subtropical seas during the winter and the gestation period is estimated to be 10 – 12 months. A newborn weans from its mother at 6 – 9 months of age when it is 11 – 12 metres (36 – 39 feet) in length. Weaning takes place on the feeding grounds in summer or autumn. Females reproduce every 2 – 3 years, with as many as 6 young being reported, but single births are far more common. The average age of sexual maturity of both male and female is 8 – 10 years, at a length of around 12 metres (40 feet) for males and 13 metres (50 feet) for females. The Sei whale can reach an age of up to 65 years.

The Sei whale is not a remarkable diver, diving only to relatively shallow depths for between 5 to 15 minutes. Between these dives, the whale swims near the surface for a few minutes, remaining visible in clear, calm waters, with blows occurring at intervals of about 40 – 60 seconds. Unlike the Fin Whale, the Sei Whale tends not to rise high out of the water as it dives. The blowholes and dorsal fin are often exposed above the water surface simultaneously. The whale almost never extends its flukes above the surface, and it rarely breaches (a leap out of the water).

Like other whales, the Sei Whale is known to make long, loud, low-frequency sounds. Relatively little is known about the specific calls made by this whale, but in 2003, observers noted Sei Whale calls in addition to broadband sounds that could be described as ‘growls’ or ‘whooshes’ off the coast of the Antarctic Peninsula.

Sei Whales migrate annually from cool and subpolar waters in summer to temperate and subtropical waters for winter, where food is more abundant.

The current global population of the Sei Whale is estimated at only 54,000.

The species remained listed on the IUCN Red List of Threatened Species in 2000, categorised as ‘endangered’. Populations in the Northern Hemisphere are listed as CITES Appendix II, indicating that they are not necessarily threatened with extinction, but may become so if they are not listed. Populations in the Southern Hemisphere are listed as CITES Appendix I, indicating that they are threatened with extinction if trade is not halted.