Saddlebacked: mostly found in the drier lands of the islands and seems to be the more aggressive in behaviour. Saddlebacked Tortoises have raised, saddle – like shells and long limbs and neck. During dominance contests, it will stretch out its neck and front legs to give it extra height. This is normally restricted to posturing and little fighting will take place.

The additional height is also a benefit in seeking food. The front of the saddleback tortoise shell is raised and although more skin is exposed giving it less protection, it is not a problem in its habitat and there are no predators to take advantage. The word ‘Galapagos’ is Spanish for ‘saddle’ and takes its name from the tortoises shell.

Saddle-shaped, flat carapace, long neck, larger distance between plastron and front of the carapace, which is angled upwards, smaller in overall size, yellowish color on lower mandible and throat. 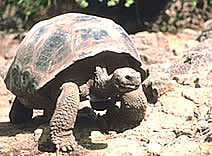 Dome-shaped: mostly found in the higher lands of the islands and in moist areas where there is plenty of lush vegetation and lots of water and shade. Domed-shaped tortoises have a more rounded shell, with shorter neck and limbs.

Domed-shaped tortoises are much more typical of the rest of the worlds tortoise species. It has no need for extra height as it will normally just trundle through dense undergrowth trampling and eating the grass. The front end of its shell is closed allowing it to retreat into an almost fully protected casing.

Intermediate: this is a sub-species of the above two, a mixture of both the Saddlebacked Tortoise and the Dome-shaped Tortoise.

Shells are not either saddleback or domeback; they can also be of intermediate type with some characteristics of both the extreme types. The Sierra Negra volcano population that inhabits southern Isabela Island is notable for the flat, so-called ‘tabletop’ shells, differing from both the domebacks and saddlebacks. There is little variation in the dull-brown color of the shell or scales between populations.

In all species, males have a concave undershell, which facilitates mating. The male tortoise is also always larger than the female tortoise.