The name, Genovesa, comes from Genoa, Italy where it is said Columbus was born. It has an area of 14 square kilometres (5.4 square miles) and a maximum altitude of 76 metres (249 feet). This island is formed by the remaining edge of a large crater that is submerged. It is nicknamed ‘the bird island’ which is clearly justified.

At Darwin Bay, frigatebirds, storm petrels, swallow-tailed gulls, which are the only nocturnal of its species in the world can be seen. Red-footed boobies, noddy terns, mockingbirds, lava gulls, tropic birds, doves and Darwin finches are also in sight.

Prince Philip’s Steps is an extraordinary steep path that leads through a seabird colony full of life, up to cliffs that are 25 metres high. It is a bird-watchers paradise with Nazca and red-footed boobies always in sight. The storm petrels here are different from any others in the world because they fly around during the daytime. To avoid predators they only return to their nest holes at night. If you have time and are a bird enthusiast, this island definitely is a must.

There is also a large Palo Santo forest. 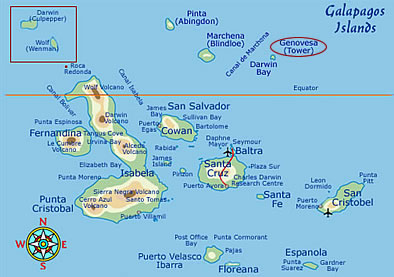 The smallest Marine Iguana in the archipelago lives here. It is also home to sea lions as well as fur seals.

Genovesa Island is a shield volcano in the Galápagos Islands in the eastern Pacific Ocean. Although no historical eruptions are known from Genovesa, there are very young lava flows on the flanks of the volcano.

The water is filled with microscopic marine life and for that reason resembles green pea soup. Both visitor sites are located in this bay.

Genovesa also offers great snorkeling opportunities even though the water is quite murky. Close to the beach and the cliffs and because of its richness with food, the bay is often full of marine iguanas and hammerhead sharks.