Below is an anatomy diagram of a typical female goat. 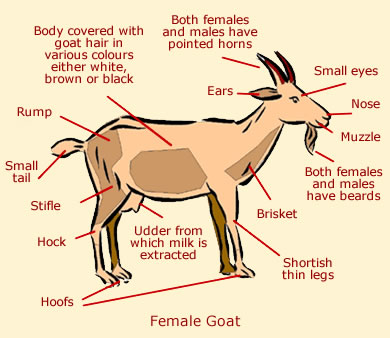 Goats are sure-footed animals who have a rough pad on the bottom of their two-toed hooves. Goats have a long, thick, furry coat that protects them from the cold. Goats range from about 17 to 42 inches (43 to 107 centimetres) tall at the shoulder. Both male and female wild goats have beards and pointed black horns.

Female goats have udders from which goats milk is extracted.

Below is a diagram of the internal digestive system of a goat. It shows the four stomach chambers and the intestines. 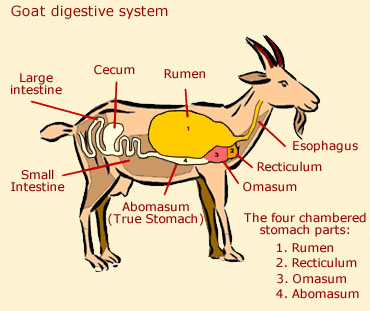 Mature goats are ruminant animals. Their digestive tracts, which are similar to those of cattle, sheep and deer, consist of the mouth, oesophagus, four stomach compartments, small intestine and large intestine.

Like other ruminant animals, goats have no upper incisor or canine teeth. Goats depend on the dental pad in front of the hard palate, lower incisor teeth, lips and tongue to take food into their mouths.

Rumen: This is the largest of the four stomach compartments of ruminant animals. The capacity of the rumen of goats ranges from 3 to 6 gallons depending on the type of feed. This compartment, also known as the ‘paunch’, contains many microorganisms (bacteria and protozoa) that supply enzymes to breakdown fibre and other food that the goat eats. The conversion of the cellulose of feeds to volatile fatty acids (acetic, propionic, and butyric acids) is the result of microbiological activities in the rumen. These volatile fatty acids are absorbed through the rumen wall and provide up to 80 percent of the total energy requirements of the animal. Microbial digestion in the rumen is the basic reason why ruminant animals effectively utilize fibrous feeds and are maintained primarily on roughages.

Rumen microorganisms also convert components of the feed to useful products such as the essential amino acids, the B complex vitamins, and vitamin K. Finally, the microorganisms themselves are digested further in the digestive tract.

Reticulum: This compartment, also known as the ‘hardware stomach’ or ‘honeycomb’, is located just below the entrance of the oesophagus into the stomach. The reticulum is part of the rumen separated only by an overflow connection, the ‘rumino-reticular fold’. The capacity of the reticulum of goats ranges from 0.25 to 0.50 gallons.

Omasum: This compartment, also known as the ‘manyplies’, consists of many folds or layers of tissue that grind up feed ingesta and remove some of the water from the feed. The capacity of the omasum in goats is approximately 0.25 gallons.

Abomasum: This compartment is more often considered the ‘true stomach’ of ruminant animals. It functions similarly to human stomachs. It contains hydrochloric acid and digestive enzymes that breakdown food particles before they enter the small intestine. The capacity of the abomasum of goats is approximately one gallon.

As partially digested feed enters the small intestine, enzymes produced and secreted by the pancreas and small intestinal mucosa further breakdown feed nutrients into simple compounds that are absorbed into the bloodstream. Undigested feed and unabsorbed nutrients leaving the small intestine pass into the large intestine. The functions of the large intestine include absorption of water and further digestion of feed materials by the microorganisms present in this area. The 100-foot-long intestinal canal of goats has a capacity to hold 3 gallons.

When a goat kid is born, the rumen is small and the abomasum is the largest of the four stomach compartments. The rumen of a goat kid represents about 30 percent of the total stomach area, while the abomasum represents about 70 percent. Hence, digestion in the goat kid is like that of a monogastric animal. In the suckling goat kid, closure of the oesophageal groove ensures that milk is channeled directly to the abomasum, instead of entering the rumen, reticulum, and omasum. When the suckling goat kid starts to eat vegetation (first or second week of life), the rumen, reticulum and omasum gradually develop in size and function.

Goats are very particular about what they eat, they will not consume food of poor quality or food that is dirty or has been trampled on. Goats require the best quality hay, green stuffs and concentrates (oats, barley, soya, linseed, etc. generally sold as a goat mix). However goats will eat a wide range of food, preferring more fibrous food to lush grass. Goats will eat young thistles and brambles, as well as twigs, they also like bark from trees. Goats are inquisitive and will nibble and investigate most items (including the proverbial washing off the line!), however, they are selective about what they actually eat.