Below is the general breeding procedure of a goat.

Goat sexually mature: From 4 to 6 months.

In season (when female goats are fertile): Between September and March; fertility lasts up to three days. If the female goat is not mated, she will come into season every 21 days. Once mated, goats can stay in milk for two to three years.

Gestation (length of pregnancy) of a female goat : 150 days

Number of goat offspring: 1 to 3

Weaning (coming off milk onto solids): Goat kids are not usually weaned any earlier than 10 – 12 weeks. The young goats need to eat an increasing amount of solid food from 2 to 3 weeks old, in order to encourage rumen development.

Handling: Goats are sensitive, intelligent animals that should be handled in a smooth, calm manner.

Companionship: Goats are social and happier in pairs. They do have a ‘pecking order’.

Does of any breed come into heat every 21 days for from 2 – 48 hours. A Doe in heat typically flags her tail often, stays near the buck if one is present. She becomes more vocal, and may also show a decrease in appetite and milk production for the duration of the heat.

Bucks also have a change in normal behaviour prior to breeding. They enter a period known as the ‘Rut’. The ‘Rut’ is characterized by a decrease in appetite, obsessive interest in the Does, fighting between Bucks, a different display of behaviour and, most notably, a strong odour.

This odour is singular to Bucks in ‘Rut’, the Does do not have it unless the Buck has rubbed his scent onto them. 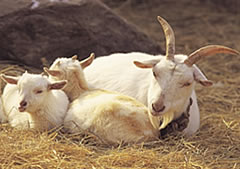 Gestation (length of pregnancy) is usually 150 days. At the end of the gestation period, either a single goat is born or twins or triplets. These are the most common births, although there are less frequent births of numbers higher than this.

Birthing is known as ‘Kidding’ and usually takes place with very few complications at all. After the female goat has given birth, she will eat the placenta which gives her most needed nutrients, helps to control blood flow and also reduces the birth scent to predators.

Following the birth, the Kid will sit somewhere safe while the mother goes to feed. When she returns, she will call to her Kid and it will come to her to play and be nursed. 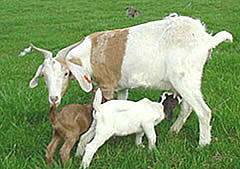 After ‘Kidding’ the female goat will enter a period called ‘Freshening’. This is where she begins her milk production. A healthy Doe will produce 6 pounds of milk per day while she is in ‘milk’. The Doe will milk her Kid until it is ready for weaning at about 10 – 12 weeks old. Neutering early prevents the development of aggressive behaviour and nasty billy goat smells.

Does (female goats) usually live on average 11 – 12 years. Premature endings for Does usually come through ‘kidding’ (giving birth). Does that are ‘retired’ from breeding around age 10 live longer, up to the age of 16 – 18 years. There was one incident where someone found a 24 year old female goat, which is quite a good age for this animal. However, it did state that she had retired from breeding at the age of 10, which goes to show, if you over breed your goat, it will not live too long, however, if you retire your goat from breeding at a reasonable age, you will have you goat for much longer.

Bucks (male goats) actually live shorter than female goats. This is due to the fact that they go through what is known as a ‘rut’. These periods of ‘rut’ is when they are ready to breed. Apparently it takes a lot out of them.