Grasshoppers congregate in huge swarms that can do severe damage to crops. These swarming grasshoppers are called locusts. There are more than 20,000 species of grasshoppers known to science, but only about a dozen of these transform into locust and produce damaging swarms.

Locusts have two ‘phases’ of existence. When food is plentiful, they exist in the solitary form. In this form they act just like other grasshoppers – they have no tendency to form swarms and they do little damage. Locusts can exist in the solitary form for many generations. However, if food becomes scarce, they change into a totally different form, this form of locust is called the ‘gregarious locusts’ – following the transformation you would not think they were the same species.

However, it is not just the appearance change which is the problem, it is the change in behaviour. When locusts change into this new form they really like each others company, they join together in an enormous swarm (we are talking billions of locusts, covering hundreds of square miles in the worst cases) and eat just about every green thing they encounter. Swarms can travel vast distances covering 130 kilometres per day. 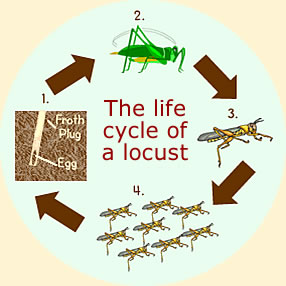 It is recorded that one particular swarm in 1988 covered an area of 75 x 15 miles in North West Africa. The swarm contained about 150 billion locusts and was estimated to be eating 300,000 tons of fresh green food per day.

If you have ever wondered how a grasshopper can cover so much ground and do so much damage, just consider the insects eyes.

Located on the head, along with antennae and chewing mouth parts, are two kinds of eyes.

The large ‘compound’ eyes consist of thousands of little eyes that work together to form a single picture in the grasshoppers brain. If you have ever tried to catch a grasshopper, you know how difficult it can be. That is because these eyes enable the insect to see forward, backward and sideways for long distances. Grasshoppers also have three small single eyes.