Let us have a look at the anatomy of the ladybird so we will know which parts are called what. 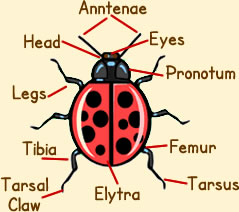 Ladybirds are similar in structure to a winged beetle. If you have visited our Beetle section, you will have discovered that winged insects have a covering over their wings for protection. This covering is called ‘elytra’. When ladybirds fly, the ‘elytra opens up to allow movement of the wings. When it is still, the ‘elytra’ closes up. The head of a ladybird is very tiny, although the females head is larger than the males. The head is so tiny, it can sometimes be mistaken for the pronotum.

Like all insects, ladybirds have six jointed legs, arranged each side in 3 pairs, 2 antennea, an exoskeleton which is made from ‘chitin’ – a strong protein that is simialr to what makes our hair and nails.

Ladybirds have a 3 part body made up of head, thorax and abdomen.

If you look closely at the top of the Ladybird you will probably have thought the large black section on top of the body is its head, but its head is on top of its pronotum. This is a ladybird during rain – see how the small raindrops sit on the elytra.

How Many Legs Do Ladybugs Have?

What is a group of Ladybugs called?

A group of ladybugs is called ‘a loveliness’ or ‘a bloom’