Llamas come in a variety of colors. Llamas can be various shades of brown, black, peach, white, grey, roan, paints, spotted and many other patterns. Alpacas on the other hand are less colorful because they were bred to have a single uniform color to produce a consistent product and ease the harvesting of wool. Alpacas can be found in black, browns, grey, white or a mix of white with another color. Llamas are physically distinct from other livestock in a number of ways. Some characteristics are more noticable and some are not. 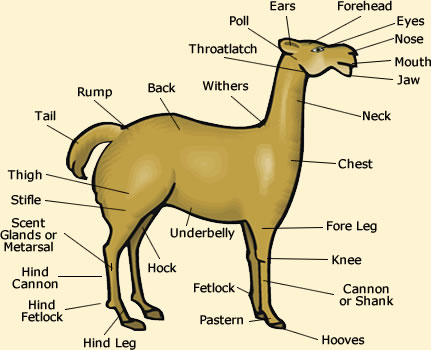 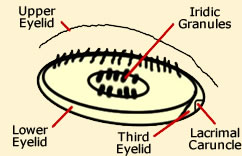 Like some other species of animal, llamas have three eyelids, a cornea, a sclera (the white part), an iris and pupil, a lens, a retina and an optic disk (where the optic nerve enters the back of the eye). When you look at a llamas eyes, the first thing you will probably notice is the size and prominence of them and their soft, friendly gaze.

Llama eyes are only slightly smaller than other ruminant animals such as cows and horses, but whereas cows and horses have rather large heads, llamas have smaller heads and this is the reason their eyes look more prominent.

Compared to other ruminant animals, the tear production in llamas is quite different. The tear film has three layers:

1. a deep mucous layer right against the eye

2. a middle aqueous (fluid) layer and

The mucous layer is produced by cells (goblet cells) which are along the conjunctiva. This layer holds the aqueous layer against the eye and has some antibacterial activity. The aqueous layer is produced by the lacrimal gland and the gland of the third eyelid. It provides most of the moisture and performs most of the flushing action of the tears. The outer oil layer comes from the tarsal (meibomian) glands which line the edges of the eyelids in most species.

Camelids do not have tarsal glands and their oil layer comes from a sebaceous gland (another type of oil secreting gland) on the lacrimal caruncle (the triangular lump of tissue in the inside corner of the eye). The main function of the oil layer is to increase surface tension and prevent evaporation of the aqueous layer.

The iris of camelids is also unique. Like other species, the iris can be a range of colors from dark brown to blue (non-pigmented). There may be specks of pigment in blue eyes and specks of blue in pigmented eyes.

Like all other ruminants, the pupil is oval shaped with the horizontal axis being the longer one. The difference comes with structures called ‘iridic granules’ or ‘corpora nigra’. These are dark lumpy masses coming off the iris at the top and/or bottom of the pupil margins. They are thought to shade the eye from bright sunlight.

Horses only have these on the top pupillary margin and they are more rounded. Cattle and sheep have more rounded iridic granules like horses, but on both sides (top and bottom) of the pupil.

The fundus of the eye is basically the back of the eye where the retina lies. This area of the eye can only be seen by dilating the pupil and using an ophthalmoscope or magnifying glass. The retina lies over a dark non-reflective portion and a colored reflective portion (in most species) along with the optic disk (area where the optic nerve comes into the eye). The colored reflective portion of the fundus is called the ‘tapetum lucidum’. It is used to reflect light back into light receptors of the retina and improve night vision. The reflection of the tapetum is what you see when headlights shine into animals’ eyes at night. Llamas are not usually active at night and therefore, do not have a tapetum.

The fundus also has a characteristic pattern of blood vessels for different species. The camelid pattern of vessels is very similar the pattern for cattle. There are three main pairs of vessels which leave from the optic disk area and radiate out. 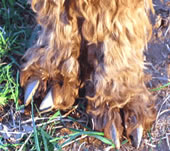 Llamas do not have hooves like horses, cattle, sheep or goats. Their feet have unique structure which enables them to be very sure-footed and cause minimal damage to the environment. Each foot is made up of two toes (the third and fourth digits) which have a toenail and pad. The toenails extend off the front of each toe and curve to point towards the ground.

The toenails will need to be trimmed occasionally if the llama does not wear them down naturally. Most of the bottom surface of the foot is composed of the pad. The pad is very similar to a dogs pad. The llamas pad is larger and not quite as rough as a dogs. This pad enables llamas to have more sensation and better contact with the ground than any animal with hooves, therefore making them more sure-footed. Since the pad is softer than a hoof, llamas cause much less damage to the environment. It will take a llama much longer to wear a path than a horse, cow, sheep or goat.

The llama has three phalanges per digit just like in our own fingers and toes. The second and third phalanges are parallel to the ground to provide the framework for the foot. Unlike many other livestock who only walk on the third phalanx, llamas walk on both the second phalanx and the third phalanx. The first phalanx is at a 45 to 50 degree angle with the ground. This bone emerges from the foot to make up the pastern. It creates the fetlock joint when it meets the metacarpals (front limbs) or metatarsals (hind limbs).

The structure of their feet is part of what gave llamas an important role in ancient South American society and is creating a use for them now. Llamas are regularly used for packing by hikers, campers and hunters. Some park rangers are now using llamas as pack animals for park maintenance because they can go more places than mules and do less damage in the process.