The island Marchena was named after a Spanish monk, Fray Antonio Marchena. It has an area of 130 square kilometres (50 square miles) and a maximum altitude of 343 metres (1,125 feet). Galapagos hawks and sea lions inhabit this island and it is home to the Marchena Lava Lizard, an endemic species.

There are no visitor sites on this island, although it is possible to dive in the waters around Marchena. Most visitors only see it if they sail around the northern part of Isabela on the way to Tower Island, its nearest neighbour about 45 miles due west. The islands name comes from a Spanish monk, Frey Antonio de Marchena.

Like many of the Galapagos volcanos, Marchena has a caldera (a caldera is a volcanic feature formed by the collapse of land following a volcanic eruption. They are often confused with volcanic craters. The word ‘caldera’ comes from the Spanish language, meaning ‘cauldron’). Marchena’s caldera is roughly elliptical and measures 7 kilometres by 6 kilometres, within the range of caldera sizes of the large western volcanoes.

Marchena’s caldera is unusual, however, in that it has been almost completely filled with young lavas, some of which has spilled over and down the sides. The oldest lavas are 500,000 years old. 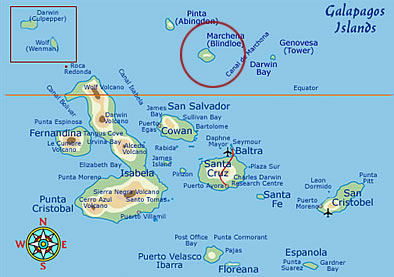 Another reason why Isla Marchena is so famous is that, although it is uninhabited, it was embroiled in the ‘Floreana Mystery’. Here the dead bodies of Rudolf Lorenz and the captain of the ship he was on, washed up mysteriously on the shore of the island.

Marchena is rather desolate and has no fresh water and hence has never been settled, and its flora and fauna have not been disturbed by feral animals or introduced plants. Except for diving in the waters around it, it is off-limits to tourists and is therefore seldom visited. Tortoises have apparently never inhabited Marchena.