Like all insects, moths have a body with three main parts – head, thorax and abdomen. Moths have three pairs of jointed legs on the thorax. Moths are also characterized by their two pairs of large, scale-covered wings and by mouthparts that form a long proboscis for sipping nectar. Moths have compound eyes and two antennae. 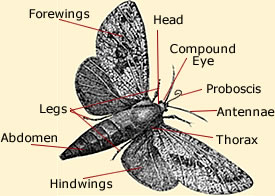 Compound eyes are made up of many hexagonal lenses just like other insect compound eyes. 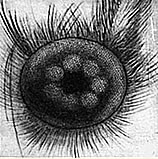 Metamorphosis of a Moth

Moths undergo a process of total change known as metamorphosis. This process for Lepidoptera consists of four growth stages and is called Complete Metamorphosis: 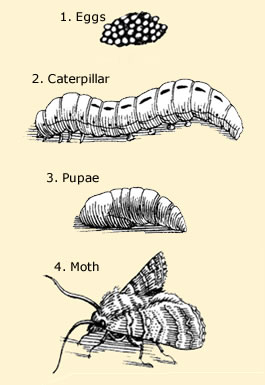 What do Moths Eat?

Moths have a long, tube-like tongue that they use to suck nectar from flowers. They also have a special mouthpart called a proboscis, which helps them drink the nectar.  Moth caterpillars eat plants, leaves and natural fibres such as wool and cotton.