North Seymour is a small island near to Baltra Island in the Galapagos Islands. It was formed by seismic uplift rather than being of volcanic origin. The island has a flat profile with cliffs only a few feet from the shoreline, where swallowtail gulls and tropicbirds sit perched in ledges. A tiny forest of silver-grey Palo Santo trees stand just above the landing, usually without leaves, waiting for rain to bring them into bloom.

The island is teeming with life. Visiting the island you may have to give way to a passing sea lion or marine iguana. Flocks of pelicans and swallow tailed gulls feed off shore and seasonally masked booby birds can also be seen. The whole island is covered with low, bushy vegetation.

The island is named after an English nobleman, Lord Hugh Seymour. It has an area of 1.9 km² (0.7 square miles) and a maximum altitude of 28 metres (92 feet). 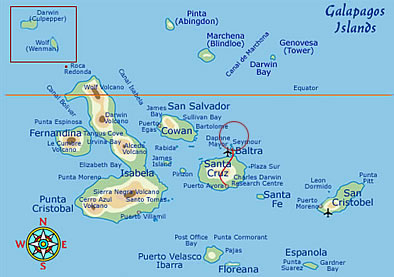 North Seymour is an extraordinary place for breeding birds and is home to one of the largest populations of nesting blue-footed booby birds and magnificent frigate birds. Pairs of blue-footed boobies can be seen conducting their mating ritual as they offer each other gifts, whistle and honk, stretch their necks towards the sky, spread their wings and dance, showing off their bright blue feet.

Magnificent frigate birds perch in low bushes, near the boobies, while watching over their large chicks. The frigates are huge, dark acrobats with a 90-inch wingspan. Male frigates can puff up their scarlet throat sacks to resemble a giant red balloon. Boobies and frigates have an interesting relationship. Booby birds are excellent hunters and fish in flocks. The frigates by comparison are pirates, they dive bomb the boobies to force them to drop their prey. Then the acrobatic frigate bird swoops down and picks up the food before it hits the water.

North Seymour has a visitor trail approximately 2 kilometres in length crossing the inland of the island and exploring the rocky coast.

The stock for the captive breeding program of the Galapagos Land Iguana is descended from iguanas which William Randolph Hearst translocated from Baltra Island to North Seymour Island in the 1930s.