Pinta Island (also known as Abington Island) is an island located in the Galapagos Islands group, Ecuador. Pinta got its name from one of the caravels of Columbus. It has an area of 60 kilometre squared and a maximum altitude of 777 metres. Pinta is the original home to the very old Giant Tortoise, Lonesome George, perhaps the most famous tortoise in the Galapagos Islands.

You can now visit Lonesome George at the Charles Darwin Research station on Santa Cruz island. Lonesome George is the only known surving Pinta Giant tortoise. Since there is little hope of finding another specimen, his species is doomed to extinction.

Pinta Island is also home to swallow-tailed gulls, marine iguanas, sparrow hawks, fur seals and a number of other birds and mammals. The most northern island in the Galapagos, at one time Isla Pinta had a thriving tortoise population. 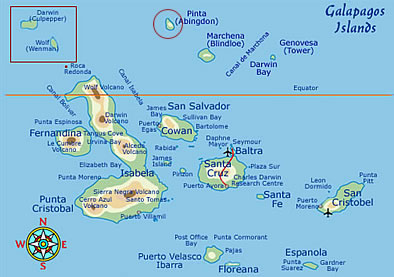 The elongated island of Pinta is the northernmost of the active Galapagos volcanoes. Pinta is a shield volcano with numerous young cones and lava flows originating from NNW-trending fissures.